In Depth: Why South Korea is winning the coronavirus battle

While the US and others struggle, Seoul's fast response keeps COVID-19 at bay South Korea's novel coronavirus outbreak once looked grim, with new cases skyrocketing daily and a massive cluster of infections, making it the worst-hit country outside China.

The disease suddenly exploded in South Korea on Feb. 18. The caseload multiplied 180-fold in two weeks, with daily cases topping 909 on Feb. 29. But the troubling trend quickly reversed. From March 6, South Korea began reporting declining numbers of new cases, with daily increases dropping to the dozens. As of Monday, South Korea had recorded 9,786 infections.

Globally, more than 857,000 people have contracted COVID-19, and 42,000 have died, according to Johns Hopkins University. To stop the viral spread, governments are turning to draconian measures, from locking down cities to closing borders.

But South Korea has shown there is another way to bring the disease under control. Businesses across the country have largely carried on, and no city has been locked down. With new cases declining, life in South Korea is returning to normal.

More importantly, the country has one of the world's lowest fatality rates at just 1%, compared with the 3.4% global rate estimated by the World Health Organization in early March.

South Korea learned the importance of preparedness the hard way after the 2015 outbreak of Middle East respiratory syndrome. A single imported case of MERS spurred a chain of transmissions that infected 186 and killed 36. Nearly 17,000 people were quarantined, and the government was harshly criticized for its slow response.

As COVID-19 emerged in China late last year, South Korea started mobilizing resources for an outbreak. The country tested for the virus at the fastest pace in the world, enabling early detection, effective isolation and timely treatment to reduce deaths.

Its introduction of drive-through test stations, which allow health workers to take swabs to test for the virus without people leaving their cars, is now being copied by other countries, including Canada, Germany and the U.S. 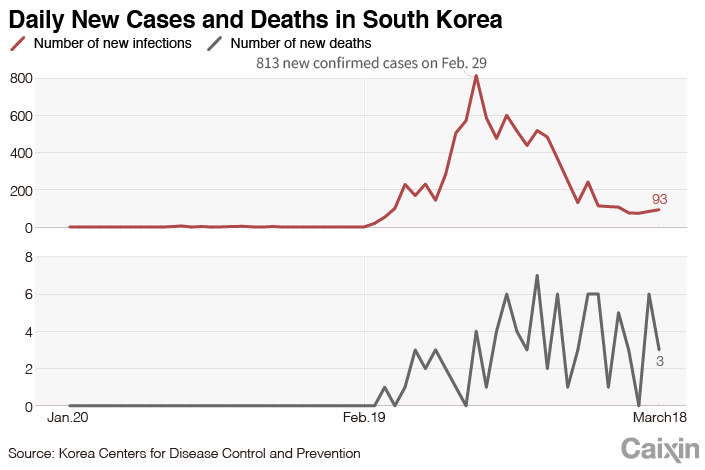 According to government data, South Korea has the ability to test 12,000 people a day on average, with peak capacity of as many as 20,000 a day. Test result are usually available within six to 24 hours. By March 20, the country had tested more than 300,000 of its population of 51 million people, or more than one of every 200.

By contrast, the U.S., with a population more than six times that of South Korea, may have tested only about 170,000 people through March 23, according to Dr. Deborah Birx, a member of the White House Coronavirus Task Force.

"The South Korean government responded quickly and took effective measures after the emergence of super-spreaders," said Huang Yanzhong, a public health researcher at the U.S. Council on Foreign Relations. Massive testing is an important factor for stopping the virus and played a decisive role in controlling the epidemic at an early stage, Huang said.

Even though the country reported 152 new cases on March 19 and the emergence of new clusters over the past week, South Korea's handling of the outbreak is a model of early action and swift containment, experts said. A look at the country's performance over the past two months may provide lessons for other countries.

News of an unknown pneumonia emerging in the city of Wuhan in central China came to light around Dec. 31. Three days later, the Korea Centers for Disease Control and Prevention, or KCDC, set up an emergency team to study the disease.

On Jan. 8, South Korea reported its first suspected case -- a 36-year-old Chinese from Gyeonggi Province who had visited Wuhan in mid-December. The patient, who showed pneumonia-like symptoms, later tested negative for the coronavirus, but the incident set off alarm bells.

South Korean authorities stepped up efforts starting on Jan. 16 to screen people who had visited Wuhan, as infections were reported in Thailand and Japan.

The first case was confirmed on Jan. 20 and reported publicly, the same day Beijing and Guangzhou reported their first cases. The KCDC immediately raised its alert level. At the same time, authorities started tracking the health of about 3,000 people who had traveled to Wuhan over the previous 14 days, and lawmakers moved to revise laws to assist in disease control efforts.

Following Wuhan's lockdown on Jan. 23, the KCDC dispatched a team of experts to the city to study the outbreak. Meanwhile, construction of a massive virus-testing network started in South Korea involving a joint effort between private and public institutions. It went into operation in early February. 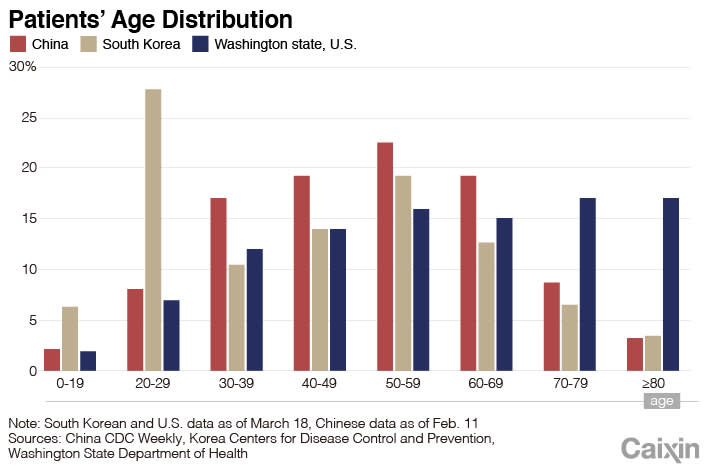 The COVID-19 outbreak is the first major test for South Korea's disease control system since an overhaul triggered by the 2015 MERS outbreak. The revamp gave the KCDC greater authority in handling epidemics and equipped hospitals with adequate quarantine and pathogen testing facilities.

The system proved effective. In the month after South Korea's first confirmed case, the daily increase in infections stayed at less than four, and no cases were reported between Feb. 12 and Feb. 15. By Feb. 16, the number of total infections had reached 30 -- 14 inbound travelers and 16 of their close contacts. On Feb. 18, President Moon Jae-in predicted the outbreak would "disappear before long."

But he spoke too soon. The next day, South Korea reported a record of 20 new cases, including 14 linked to a religious group known as the Shincheonji Church of Jesus in Daegu, the country's third-largest city after Seoul and Busan.

The previous day, South Korea had diagnosed its 31st COVID-19 patient, who would soon become known as the country's "super-spreader." The 61-year-old woman, who had not traveled abroad since December, was part of the mass congregation of the Shincheonji Church and had come into contact with more than 1,000 people.

On Feb. 20, South Korea added 53 new cases, more than the total count over the previous month. Of the new infections, 23 were linked to Patient 31. Since then, new cases surged every day, and the total number more than doubled in the week between Feb. 29 and March 7.

It is still unclear who was the first patient in the Shincheonji Church, but the organization's extensive network of 210,000 members nationwide allowed the virus to spread at lightning speed. On Feb. 25, the government started to screen all Shincheonji Church members. As of March 3, 13,241 members reported symptoms. In Daegu, 4,328 members were tested, with 62% turning up positive.

On March 3, President Moon declared war on the outbreak. 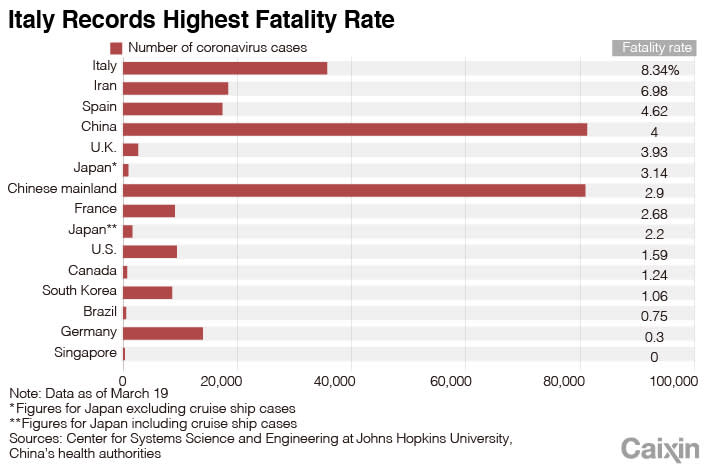 Song Qiao, a Chinese woman in South Korea, received a notice from a community clinic asking her to stay in self-isolation after one of her friends at the Shincheonji Church was confirmed as infected. During her quarantine, Song received daily calls from the clinic inquiring about her condition. Several days later, she tested negative for the virus.

"The South Korea government acted quickly in tracing and testing suspected patients," Song said. "When one case is confirmed, all people and places that had contact with the patient are traced."

Since the outbreak, South Korea has established 118 labs and 633 testing sites, including drive-through clinics and pop-up facilities, forming a vast network for fast and affordable public testing. In two weeks after the outbreak escalated in late February, 120,000 people were tested.

South Korea was well-prepared for the shift. When Chinese scientists first published the genetic sequence of the novel coronavirus in January, South Korean companies started developing and stockpiling test kits, even before the country discovered its first case.

The government approved the first test kit on Feb. 4, made by Seoul-based Kogene Biotech Co., after the country had reported only 16 cases. According to South Korean media, as of March 16, four domestic companies had won approval to produce test kits and start mass production. Their total capacity has since met domestic demand, and the manufacturers say they plan to export their kits.

"South Korea's experiences showed how sound coordination between the state and private sector can benefit efforts to screen and contain the disease," said Huang of the U.S. Council on Foreign Relations.

Massive testing is the key that helped South Korea control the outbreak and reduce fatalities, said Stanley Perlman, professor of microbiology and immunology at the University of Iowa. But such measures could be carried out partly because of South Korea's relatively small territory, and will be a challenge for large countries like China and the U.S., Perlman said.

South Korea also adopted rigorous quarantine measures to prevent the spread of the virus. These measures came from the painful lessons learned in Daegu, which has nearly three-quarters of all cases in the country.

As in the early days in Wuhan, hospitals in Daegu were overwhelmed, resulting in numerous fatalities due to delayed treatment, local epidemiologists said. Meanwhile, many patients with mild symptoms were told to quarantine at home, causing clusters of infections among family members.

On March 1, Daegu had 2,569 confirmed patients. But only 898 of them were hospitalized and the rest stayed home. The same day, the South Korean government issued new guidance for COVID-19, including setting up dedicated facilities to receive patients at different stages of the disease to reduce the burden on hospitals, similar to the makeshift hospitals constructed in Wuhan.

Since then, hotels and company dormitories have been reserved for use as makeshift wards and quarantine centers to put people suspected of the disease or those with mild symptoms under centralized observation.

Mass testing and strict quarantine measures allowed South Korea to slow the outbreak without shutting down cities and banning travel. Despite social and cultural differences, South Korea's epidemic control measures can be implemented in other parts of the world, said Jeremy Rossman, a virologist at the University of Kent.

The battle against a global pandemic can hardly rely on just one country. On March 13, China and South Korea formed a joint task force to control COVID-19 through coordination of customs, disease control and treatment research. Four days later, Japan joined the partnership.

While the outbreak in the earliest-hit Asian countries has showed signs of waning, experts warn it is too early to relax as the risks of new infections linger.

South Korean cases continued to trend down, with daily infections dropping to below 100 starting on March 7. That ended, however, with a rebound on March 19, when 152 new infections were reported, including a cluster at a Daegu nursing home. The previous week, another cluster of cases appeared near a call center in Seoul.

"As long as there are still uncertainties, we can't say the outbreak has peaked," Chun said.

South Korea has stepped up measures to address a potential worsening of the epidemic. Since March 16, the country started screening all people arriving at airports, Koreans included.

The spread of COVID-19 has been slowed in South Korea and China largely because of strict social distancing and public hygiene, said physician Jin.

"It won us a precious time to review our efforts to prepare for a new outbreak," Jin said. "The enemy we fear most is not the virus, but the next surge we must face without changing our current lifestyle."