In Depth: Widespread coronavirus tests to be new normal in China 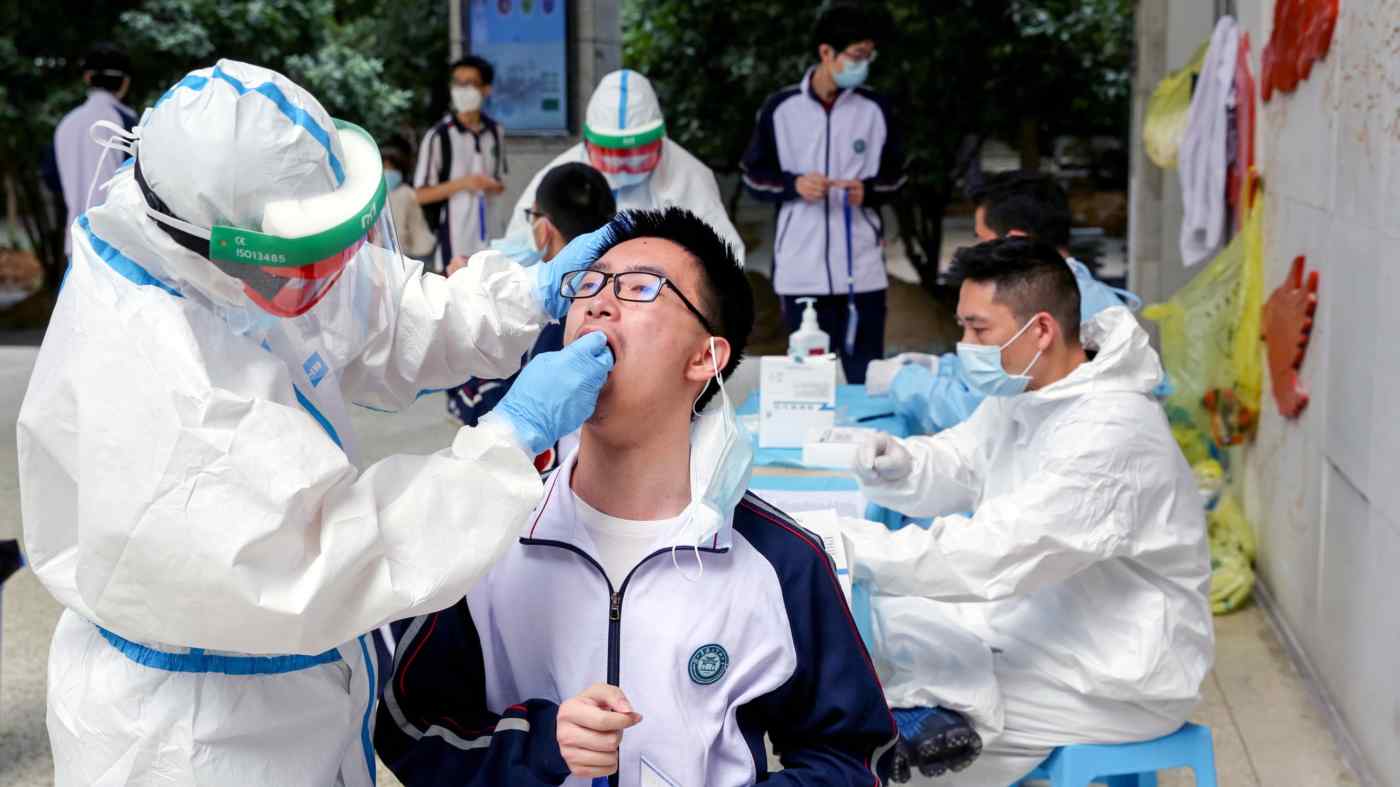 Large-scale, efficient testing has been proven key to controlling the spread of the new coronavirus in the global war against the pandemic. As countries from around the world move to reopen economies after monthslong lockdowns, efforts to ramp up testing become even more essential.

But quickly expanding capacity to meet massive testing demand while improving the reliability of results remains a challenge.

Despite concerns about accuracy, the nucleic acid test is still the best method for detecting coronavirus. Such tests identify genetic traces of the virus. According to China's National Health Commission, a patient usually needs at least five tests from confirmation of infection to recovery.

An April 20 study by Beijing-based Dongxing Securities showed the global need for COVID-19 test kits reached 84.3 million as of April 17. However, only 14.4 million tests were actually performed.

In China, where the first wave of the outbreak was fought since December, local governments and businesses face urgent needs to provide enough virus tests as social activities gradually resume as domestic cases wane. At the same time, the country is under pressure to swiftly detect and control the rising number of infections from inbound travelers.

Insufficient access to testing is a lesson China learned in its failure to contain the early outbreak of COVID-19 in Wuhan. The country has since expanded capacity by fast-tracking approval of dozens of testing kits, setting up new labs and authorizing more private institutions to take part.

As of Friday, the national drug regulator approved 30 testing kits for the virus, including 19 nucleic acid tests and 11 antibody tests. The combined manufacturing capacity of testing kits surpassed 9 million a day, according to the National Medical Products Administration.

Statistics from Dongxing Securities showed that in normal operation, medical institutions in China could test a total of 1.66 million people a day, matching the basic needs of massive testing as social activities resume.

But access to testing has been uneven. While big cities including Beijing, Guangdong and the epicenter Wuhan have greatly expanded capacity and allowed residents to take tests as they wish, people in remote areas such as Heilongjiang still face difficulties.

On April 22, the government pandemic task force led by Premier Li Keqiang pledged to expand testing access to ensure that all people who need the tests can get one, including those exposed to higher risks.

"Boosting testing capacity at a faster pace is needed for society to resume business and social activities to the normal level," the task force said in a statement.

Without proven treatments and vaccines, continued disease control measures such as social distancing and aggressive testing will be essential for countries to control the outbreak, experts said.

There is "no chance" that the coronavirus pandemic will end soon, and countries must prepare for a "new normal" amid plans to reopen, said Zhang Wenhong, head of the infectious diseases department of Huashan Hospital of Fudan University in Shanghai and director of the city's COVID-19 clinical expert team.

Many countries will need to move flexibly, permitting a certain amount of economic activity while also maintaining aggressive testing, quarantine and social distancing measures while shutting down gatherings, communities and even cities if caseloads rebound, Zhang and his colleague Ai Jingwen wrote in an opinion piece.

"The earlier, more thoroughly, and more decisively you do it, the better the results," they wrote.

High school student Li Tian took a COVID-19 test at her school in late April. A fully protected health professional inserted a long swab into the back of her throat for several seconds to take a sample. Days later, Li received a result and was told she could return to school.

Li was among the first batch of students in Guangzhou who received nucleic acid tests in preparation to resume classes. The city government announced a plan on April 20 to test 30,000 school employees and 167,000 graduating students for the first phase of school reopening. Three days later, 93% were tested.

The southern China business hub also set up dozens of free testing sites for residents. Guangzhou authorities said the city could conduct 70,000 nucleic acid tests daily as of April 21, with readiness to expand to more than 100,000.

The Beijing city government also pledged that the public would have access to virus tests. The capital allowed 50 public and private institutions to offer testing, up from only three previously. In Wuhan, the epicenter of the outbreak, more than 300 institutions can provide tests. Residents in many major cities can reserve a test through online platforms such as Alibaba and JD.com. The cost for a nucleic acid test is about 240 yuan ($34) in Shanghai and 100 yuan for an antibody test.

An individual at a testing institution told Caixin that since late March, testing demand from hospitals has declined as the number of patients decreased. However, overall demand generally increased as more businesses and individuals ordered tests, especially as travel bans are lifted.

A major part of demand for testing is the millions of students waiting to return to school. As of April 17, more than 35 million students in 24 provinces and cities returned to school, according to the Ministry of Education. By May 11, most schools across China had reopened. Beforehand, however, a test is required for students and teachers in most cities.

China has approved 27 companies to produce novel coronavirus test kits, up from only three in January. Their combined production capacity reached over nine million per day, compared with 773,000 in late January.

Demand for testing kits is rising quickly, not only in China but also abroad, Huaxi Securities said in a March report.

A sales person for a Shanghai testing kit manufacturer said that since mid-March, the company has received frequent inquiries about potential orders from the Philippines, Thailand, Malaysia, Italy, Iran and Chile.

Virus testing will become a normal practice in the post-outbreak era in China as it can control the spread of the disease, Dongxin Securities said. Meanwhile, demand for test kits from abroad is rising as more countries step up control measures, which will expand business for Chinese manufacturers, the brokerage said.

Chinese medical device manufacturers have stepped up exports since March amid rising overseas orders. According to an industry database, 98 Chinese companies have won European Union licenses to sell testing devices and four are qualified in the U.S. But the surge in exports has been accompanied by complaints over the quality and accuracy of test kits, forcing Beijing to halt medical supply exports on March 31 without domestic licensing. The ban was lifted on April 26.

The accuracy of the virus tests is still a lingering concern, as cases have emerged of people who tested negative but were later found to be infected. Experts said the sensitivity of the tests could be affected by multiple factors, including the quality of the testing kits, lab operations, sample discrepancies and patient conditions, among others.

Chen Weijun, general manager of BGI PathoGenesis Pharmaceutical Technology, said even the best nucleic acid testing kits have a 10% failure rate. For populous countries like China and the U.S., this failure rate could affect millions of people.

Cheng Jing, an expert at the Chinese Academy of Engineering, said at a government news conference in March that the Ministry of Science and Technology set up a special research project to develop more-sensitive testing kits. But before the new products are available, continued expansion of testing is the only way to better monitor the virus, Cheng said.

In addition to sufficient supply of testing kits, increasing the capacity of labs to run the tests is another crucial issue.

South Korea, which is seen as a successful model, has shown how easy access to testing and enough lab capacity can help with disease control. Shortly after the outbreak, the country set up more than 600 testing sites for obtaining samples that were studied in more than 100 labs nationwide.

By contrast, China recognized only test results from the Chinese Center for Disease Control and Prevention until Jan. 16 -- a practice criticized for missing many patients and delaying response in the early days of the outbreak.

Although the number of authorized testing institutions was gradually expanded, it was not until late January that private labs were allowed to run the tests. Gene giant BGI Group, Guangzhou Kingmed Diagnostics Group Co. and Ping An Health were among the first companies that took part in testing.

The cabinet set out a plan in April to expand the capacity of public-funded virus testing facilities by setting up new labs and upgrading existing ones. Major hospitals are required to set up qualified labs to facilitate virus testing.

The pandemic showed that public hospitals alone were unable to meet the surging demand for testing and how the private sector can alleviate shortages of test equipment and manpower in public systems, said Zhang Haiquan, chief of a Wuhan-based lab run by Ping An Health, a subsidiary of Ping An Insurance.

The outbreak also uncovered the need for government support, proper oversight and technology improvement in the private sector to allow institutions to better play their role, said Zheng Xueqian, a senior expert at the NHC.

Zheng called for revisions of the law to decentralize the power of CDC in emergency circumstances to allow more qualified institutions to take part in testing, research and treatment in response to major outbreaks.