The Wuling Mini EV is "small on the outside, big on the inside" and is ideal for urban commuting and parking in tight spaces, the producer says. (Photo courtesy of GM)
LU YUTONG and AN LIMIN, CaixinOctober 15, 2020 22:13 JST | China
CopyCopied

When it launched in April, Tesla's Model 3 was the hottest new-energy vehicle (NEV) in China.

But last month, a closely watched monthly sales report from the China Passenger Car Association (CPCA) showed a shift. At the top of the NEV rankings with 15,000 sales for August was a two-door, four-seat battery-powered mini car, retailing at just one-tenth the price of the cheapest Model 3.

The tiny, boxy car, known in full as Wuling Hongguang Mini EV, was launched in July by a Chinese partner of U.S. giant General Motors.

The performance repeated this week when the CPCA released its sales figures for September, showing 20,150 Mini EVs were sold against 11,329 Tesla Model 3s.

Despite selling twice as many vehicles, Wuling's budget model is not competing with top-end brands like Tesla or its local imitators. Instead it is targeting a crack in China's vast low-end EV market. And it has benefited from a confluence of factors, including generous state subsidies and tightening controls on unlicensed forms of cheap, short-distance transport.

The Mini EV -- which crucially can be road licensed -- is proving particularly popular in China's less affluent regions, according to the GM joint venture known officially as SAIC-GM-Wuling Automobile (SGMW) and locally as Wuling. Compared with other NEV brands like Tesla and homegrown rival BYD., the Mini EV runs a far shorter but still respectable distance on a single charge, traveling either 120 kilometers (74.6 miles) or 170 kilometers depending on the model. The BYD Qin EV can run 421 kilometers and Model 3 at least 468 kilometers, according to their manufacturers.

Zhang Yiqin, a public relations person at SGMW, said the Mini EV is typically used by individuals to pick up family members and commute, unlike higher-end NEVs which are often sold to rental companies. "Most of (our) buyers are individuals," he said.

The company has built over 10,000 charging stations for the models, mostly located in less developed regions like Guangxi Zhuang autonomous region and Henan, as well as the relatively more affluent Shandong.

But it was only this year that the company extended the strategy into the EV business, debuting the Mini EV range starting at 28,800 yuan ($4,209), with a higher-end model for 38,800 yuan -- still just one-tenth of the price of the cheapest Tesla Model 3.

That price point makes it accessible to at least some of China's vast low-income population in inland and rural areas. Around 600 million people in the country earn a monthly income of around 1,000 yuan, Premier Li Keqiang revealed at a May press conference, and a survey conducted by researchers at Beijing Normal University backs up his comments.

The survey, from the China Institute for Income Distribution, found 42.9% of 70,000 random families polled had a household monthly income per person of no more than 1,090 yuan in 2019. If that statistic holds true nationwide, it would account for more than 599.9 million people.

More than half of the families surveyed earned between 1,090 and 5,000 yuan per month. According to Zhang, the Mini EVs do their strongest sales in the provinces of Shandong, Hebei, and Henan, as well as the Guangxi Zhuang autonomous region -- which ranked 9, 17, 23 and 25 among China's regions in terms of after-tax income per person last year, according to data from National Bureau of Statistics. While Shandong is more affluent, people in the other three regions had an annual average disposable income of about 20,000 yuan to 25,000 yuan.

"Like QQ and Alto before it, the Mini EV will become a means of transportation for many lower-tier cities and villages, the first car for young people or the second car for families," he said, referencing two earlier mini-cars that also enjoyed strong demand.

Sales of SGMW's Mini EV have been buoyed by the general recovery of China's EV market, which rebounded back to growth in July after a dramatic year-on-year plunge of 75% in February, when the country's coronavirus outbreak was at its most severe. Data from the CAAM suggests a total of 138,000 NEVs were sold last month, an increase of 67.7% compared with the same period in 2019.

The Chinese government's push for wider adoption of NEVs in the countryside has contributed greatly. A July decree from the Ministry of Commerce and two other departments instructed local governments to make policies supporting NEVs in rural areas.

The central government in April extended generous state subsidies and tax breaks to NEV-makers -- which had been facing the ax -- for two additional years in a bid to counter the fallout from the COVID-19 pandemic.

With all these incentives at work, Wuling was just one of the brands posting sparkling results. Shenzhen-based BYD sold more than 19,000 of its handful of NEV models in September, overtaking Tesla to rank second on last month's sales chart, according to CPCA figures. Sales of the Tesla Model 3 have settled at around 11,000 per month since July, while Chinese rivals like Nio and Xpeng, both listed in the U.S., more than doubled their sales over the same period.

Nio, Xpeng and Nasdaq-listed Li Auto all broke their monthly sales records in September. The latter delivered 3,504 NEVs, while Guangzhou-based Xpeng sold 3,478, an increase of 145%. Nio's monthly sales increased 133.2% to some 4,700.

Growing interest in SGMW's Mini EV also comes as Chinese authorities take aim at its competitors in the low-end motorized vehicle space, such as enclosed tricycles and quadricycles, citing safety concerns. Those vehicles have long been used as an alternative for fuel-guzzling cars given their lower costs and fuzzy licensing requirements. 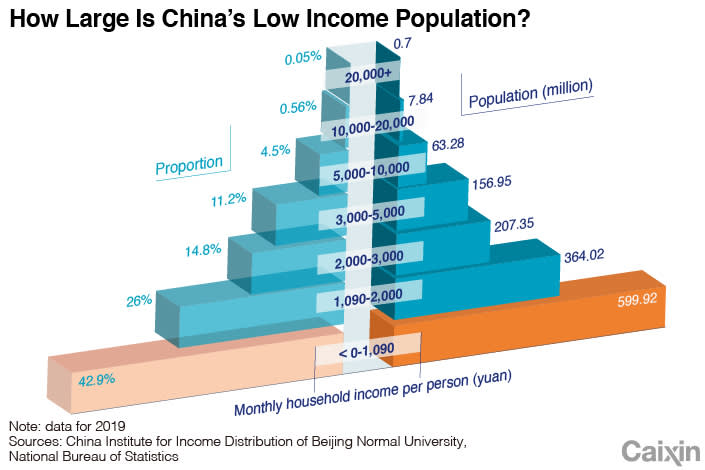 Coming in a variety of shapes and sizes, the Mini EV's traditional rivals typically cost between 10,000 yuan and 30,000 yuan and travel at speeds up to 70 kph (43 mph). They have lived in China's regulatory shadows for years, neither strictly legal or illegal, and they do not require license plates, despite being large and fast enough to do plenty of damage.

Data from the Ministry of Industry and Information Technology suggests some 18,000 people were killed, and 186,000 injured in quadricycle-related incidents in the five years to 2018. The vehicles were involved in 830,000 recorded traffic incidents over the period.

No license is required to operate such vehicles, which makes them attractive, but also a risky investment if they become prohibited in the future.

China's Ministry of Public Security, which has jurisdiction over traffic control, has opposed the idea of legalizing such vehicles, but has stopped short of an outright ban.

Some local authorities have taken their own action, however. Several cities in Shandong province were among those to ban people from operating quadricycles this year.

One industry insider said it was inevitable that the regulatory changes would drive people to purchase Mini EVs, which are road legal and can obtain motor vehicle licenses. It could also lure other brands to launch their own similar models to compete in the low-end market, the person said.

"The Hongguang Mini EV has reshaped the low-end vehicle market with its low prices," the person added. The carmaker has announced it will step up manufacturing capacity for this model to 20,000 per month in a bid to deliver orders on time.