Geopolitical friction pushes China out of the US, sharpens rivalry at home In the first quarter of the year, Alibaba Cloud's revenue growth dropped precipitously.

Last year the domestic leader, part of the group that includes e-commerce giant Alibaba and an affiliate of financial services titan Ant Group, made about 55.58 billion yuan ($8.6 billion). That was up 56% year-on-year -- compared with an average of about 50% for Chinese cloud companies. In the first quarter of this year, Alibaba's income growth fell to 37%.

Alibaba Group Holding Chief Financial Officer Wu Wei disclosed the reason behind the slump: a changing relationship with a top client. That client, she said, had been using Alibaba's overseas cloud services, but had opted to drop the company for international operations due for reasons unrelated to the product.

The client was ByteDance. According to sources familiar with the matter, as the company came under sustained attack from the U.S. government and regulators last year amid claims that its use of services from China's Alibaba posed a grave risk to American citizens, it jettisoned them. ByteDance's wildly popular short video app TikTok decided to move its servers from Alibaba Cloud to a Singaporean data center and an American cloud service provider.

Sources familiar with ByteDance's operations told Caixin that as the company pivots into the lucrative field of e-commerce, it plans to build its own data center for domestic operations, which will further reduce its dependence on Alibaba Cloud. In future, it plans to provide its own cloud services for companies within its walled-off ecosystem.

The revving up of competition at home is driven in part by the obstacles that Chinese cloud companies operated by the technology majors -- Alibaba, Tencent, and increasingly Huawei Technologies -- are running into in some overseas markets.

As U.S.-China relations have deteriorated, the American government's use of technology blacklists has reshaped the fortunes of the Chinese companies at home and abroad. Alibaba Cloud has suspended its expansion in the U.S.

Since Joe Biden became U.S. president in January, his administration has continued to ratchet up pressure on China's tech sector. Former President Donald Trump's "Clean Network" campaign, which singled out Chinese companies like Alibaba and Tencent Holdings as "untrusted vendors" whose services pose a threat to the data of American citizens, has become a bipartisan effort.

On June 9, Biden ordered the U.S. secretaries of commerce and defense, as well as his national security adviser to continue investigating threats to personal data posed by foreign software, and to prevent the unrestricted sale, transfer and access of the sensitive data of U.S. citizens, as well as to prevent foreign adversaries from accessing data from large databases. A Google employee who asked not to be named told Caixin that Chinese companies have been increasingly enlisting the U.S. tech giant's advertising and cloud services as they expand overseas. Greater China overtook Japan as Google's fifth-largest global market in 2020.

In 2019, Alibaba Cloud poached Yuan Qian, former president of Huawei's BG Marketing & Solution Sales Department, and named her president of Alibaba Cloud Intelligence International. On June 8, Alibaba Cloud announced the opening of data centers in Indonesia and the Philippines, with a plan to invest more than 6 billion yuan ($928.3 million) in overseas markets within three years to expand such centers and develop local software ecosystems.

In Southeast Asia, Alibaba and Tencent have invested in many of the tech scene's household names, which are also clients of their cloud services. Tokopedia PT of Indonesia was using Alibaba Cloud. The company recently merged with Indonesian ride-hailing and takeout provider Gojek to form Indonesia's largest technology company, GoTo.

Huawei Cloud has big overseas plans, too, and despite starting from behind, it may have an advantage. According to staff at foreign cloud service providers in China, Huawei stands to gain from its good relationships with local telecoms operators.

China's cloud service providers are away players in the international market and face tough competitors in the form of Amazon Web Services (AWS) and Microsoft. AWS is by far the leader among cloud service providers in terms of market share and technological prowess, while Microsoft has an edge in its sales force and in government relations -- which some say is why ByteDance considered tapping it when it faced a U.S. ban.

That's certainly how the company is selling itself. Xu Mingqiang, chief technical officer of Microsoft's Omnichannel division, said it has a full set of guarantee plans for Chinese enterprises going international. This plan allows its partners to share patents and helps them avoid being challenged by "rogue patent companies." The service also helps Chinese companies find local customers. Microsoft carries out joint sales and marketing in the United Kingdom, France, Germany, Singapore, the United Arab Emirates and other countries for these enterprises and introduces them to local government departments.

"These governments and enterprises are our clients. With such relationships, we have an advantage that other cloud service providers do not have," Xu told Caixin. 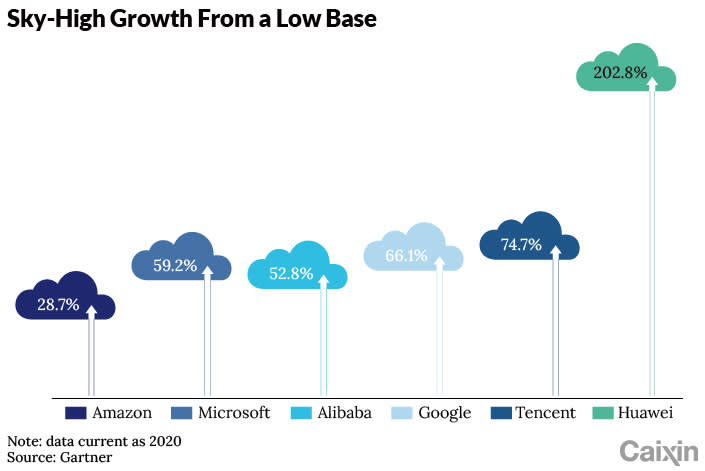 Microsoft and Amazon are also stepping up their efforts to enter the Chinese market. On March 18, Microsoft announced that it would double its cloud service capacity in China, and its new data center will officially come into service in the spring of 2022.

Smaller Chinese players are emerging too. In January 2020, domestic cloud service providers like UniCloud and Inspur Cloud are preparing for STAR Market debuts, while others, like UCloud, Kingsoft Cloud and QingCloud, are attracting investment. While they may find it difficult to take a leading role, they could gain a foothold in smaller market segments.