In depth: Huawei's chip dreams in crosshairs of latest US assault

Options exist for tech giant, but window toward self-sufficiency is closing Most of Huawei's chips are used for its own products, but some think they could form a new business opportunity.   © AP
MO YELIN, CaixinJune 3, 2020 19:27 JST | China
CopyCopied

The latest U.S. assault against Huawei Technologies is aimed squarely at the company's HiSilicon chip design unit, a move that could force the embattled company to sharply scale back or even abandon one of its most promising businesses, analysts said.

On May 15, the U.S. Department of Commerce announced it would expand a previous decision that had already cut off Huawei from its U.S. suppliers unless they got permission from Washington. It said that rule not only applied to Huawei's U.S. suppliers and other business partners, but also to any of Huawei's foreign chipmaking partners whose production lines incorporate U.S.-made equipment.

The new decision included a 120-day grace period, in which chips from orders placed before May 15 can still be shipped to Huawei before the end of the period. However, analysts expect Huawei's chances of reaching a deal with Washington to be low.

Most of Huawei's chips go into its own products, such as smartphones and telecom gear. But some have said the chips could become a new source of business.

To shield itself from the latest U.S. ruling, Huawei could still buy similar chips from non-U. S. third-party designers like Taiwan's MediaTek, even though that could hurt the quality of its 5G base stations, smartphones and other gear, analysts said. But the prospects for HiSilicon, which has seen tremendous progress over the past few years, could be cast into serious doubt, they added.

Although Huawei relies on third-party chips to power most of its core offerings of 5G gear and smartphones, it has gradually built up a team to design chips, initially for in-house use. That team at HiSilicon now has over 7,000 employees around the world, including Singapore, South Korea, Japan and Europe, according to the company's website.

China has made steady progress over the years in chip design -- also called integrated circuits -- with HiSilicon as one of the nation's leading players, said Jeff Pu, a Taiwan-based tech analyst at GF Securities. Huawei's Kirin-series smartphone chips now rival those from competitors like chip giant Qualcomm in various respects such as connectivity, Pu said.

After Washington initially blacklisted Huawei last year, barring it from buying U.S.-made chips from the likes of Qualcomm, Huawei started sourcing more chips from HiSilicon, whose sales surged as a result.

The unit's global sales grew 54% to $2.67 billion in the first quarter of this year, with 90% coming from Huawei, according to a report by IC Insights. By comparison, Huawei's total revenue grew by a slower 19% to 858.8 billion yuan ($120 billion) for all of last year. HiSilicon's strong growth helped it become the first Chinese mainland-based chipmaker to break into the world's top 10 in terms of sales, behind companies from the traditional powerhouses of the U.S., South Korea and Taiwan.

Like many other chip designers, HiSilicon outsources the actual manufacturing of its chips to contract chipmakers. TSMC, the world's largest and most advanced chipmaking foundry, is HiSilicon's biggest manufacturing partner, accounting for 14% of the Taiwanese company's sales in the first quarter.

But the latest U.S. move has called the fabless production model into question since TSMC is now likely to be barred from working with HiSilicon without a U.S. government license.

"HiSilicon will basically cease to function if it loses access to all fabs using U.S. equipment, or if it can't use the latest software tools from the U.S.," said Stewart Randall, a chip analyst at Shanghai-based consultancy Intralink. U.S. companies now dominate industries for the advanced equipment and software used to make microchips. 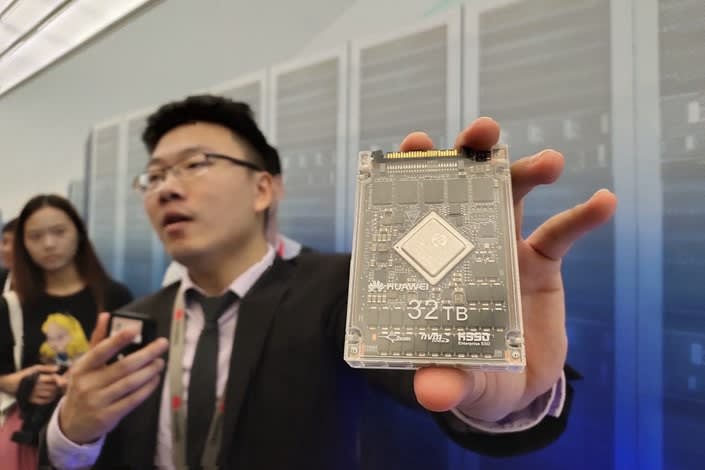 A Huawei employee demonstrates one of the company’s chips at headquarters in Shenzhen, China on Aug. 23, 2019. (Photo courtesy of Caixin)

China fabs to the rescue?

Partly anticipating tighter U.S. restrictions, Huawei has been shifting some of its chip orders from TSMC to mainland-based Semiconductor Manufacturing International Corp.

But SMIC may not be a reliable partner because it also depends on U.S.-made chip manufacturing equipment and software, observers pointed out. Many are speculating on whether SMIC will honor the U.S. rules, or risk Washington's wrath by supporting a domestic champion like Huawei.

If it were to choose the latter, SMIC could have difficulty finding new suppliers in China. While the country has made progress in many high-tech areas, it is still limited in its capability to make advanced manufacturing equipment and materials, said Chris Yim, a technology analyst at BOCOM International.

Even if SMIC were willing to take the risk, it might not help Huawei. The chipmaker's technology is still far behind TSMC's, said Szeho Ng, a chip analyst at China Renaissance. TSMC is already engaged in 5-nanometer production, while SMIC is still in 14-nanometer, he added, referring to a chipmaker's ability to produce more advanced chips by making circuits smaller.

SMIC is trying to improve its capabilities by upgrading equipment, and earlier this month announced it had secured more than $2 billion in new investment from two Chinese chip funds. But its 14-nanometer technology will be unable to make chips that HiSilicon would need for Huawei's 5G phones set to enter mass production in the near future, said GF Securities' Pu.

If it loses access to TSMC and SMIC, Huawei could still procure chips that are not custom-made for the company from other third-party suppliers, American export control lawyers told Caixin.

Huawei is already in talks with such companies, including Taiwan's MediaTek and the mainland's UNISOC, as alternatives to keep its consumer electronics business afloat if HiSilicon can no longer make its own chips, Nikkei Asian Review reported earlier this month, citing anonymous sources.

Procuring such non-customized chips would test Huawei's capabilities to integrate them into its products, and could also reduce their performance, Pu said.

The U.S. actions could intensify pressure on Huawei from elsewhere as well, as Washington pushes its allies to make similar moves. The U.K. government has launched a review into Huawei to reevaluate the country's posture toward the Chinese company, and British officials have been asked to draft a plan to reduce Huawei's involvement in 5G to zero by 2023, Bloomberg reported.

"You would expect more foreign governments announcing such moves in the future," said Pu.