In depth: Virtual banks pick a tough time to launch in Hong Kong More than a year after Hong Kong's banking regulator issued licenses to eight virtual banks, only three have opened for business. The COVID-19 pandemic is a factor, but the new ventures face other headwinds in a particularly competitive and highly regulated market.

ZA Bank, a subsidiary of Chinese online insurer ZhongAn Online P&C Insurance Co. and one of the first batch of licensees; Airstar Bank Ltd., a joint venture backed by smartphone maker Xiaomi Corp.; and WeLab Bank, the only stand-alone homegrown virtual bank, are the three front-runners. All three provide deposit, borrowing and transfer services through a mobile app.

Among the five other virtual bank operators, three are conducting pilot tests under the Fintech Supervisory Sandbox of the Hong Kong Monetary Authority (HKMA), with services provided to a limited group of customers. Two are still in an internal testing stage.

When the HKMA issued the first batch of licenses in March 2019 and five more two months later, the regulator and the operators expected services to commence in six to nine months. But now it's an open question whether the remaining virtual banks can open by the end of 2020.

In a city with a population of almost 7.5 million and more than 160 traditional banks, the competition in Hong Kong's banking sector is exceptionally fierce. How much market share the new challengers can grab away from traditional banking giants with deep roots in the international financial hub is still unknown.

In the longer term, the virtual banks aim to build on success in Hong Kong and expand to the Chinese mainland and other markets. Winning the first battle in Hong Kong is crucial for them and their parent companies. 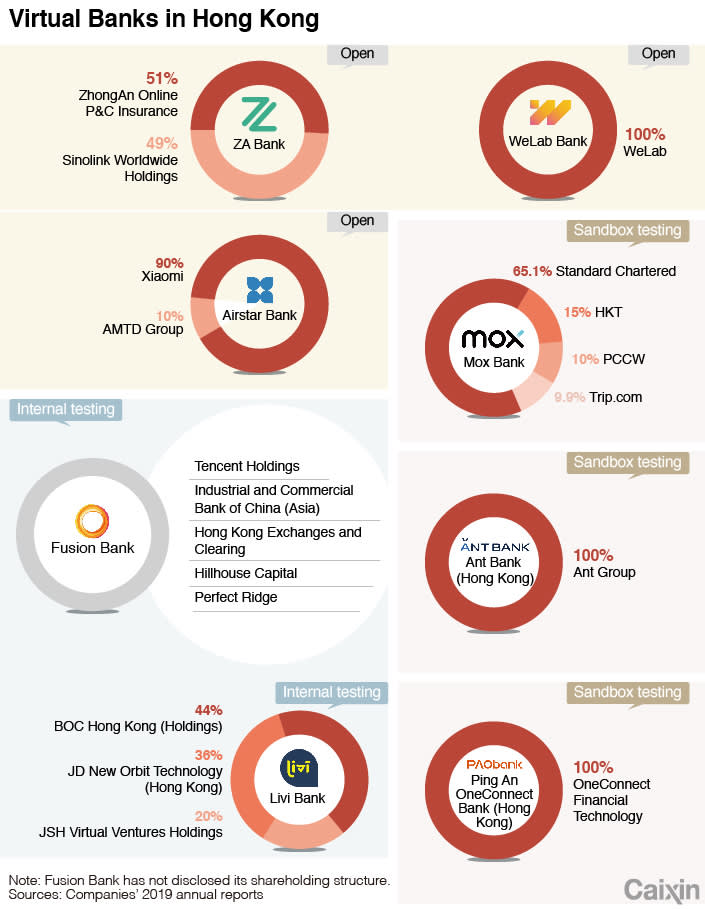 The coronavirus pandemic that started in December clearly slowed preparatory work for the virtual banks. Even though virtual banks don't have physical branches, the operators still need to recruit talent and build virtual banking platforms. Amid the pandemic, it took some time for the newly established companies to adjust to work-from-home conditions, an insider at a Hong Kong virtual bank told Caixin.

Christopher Hui Ching-yu, the city's secretary for Financial Services and the Treasury, said in April the COVID-19 outbreak affected the virtual banks' preparations, but the regulator considered their progress satisfactory.

The HKMA and the licensed virtual banks underestimated the difficulty of preparing to launch services, said Gary Ng, partner in the Risk Assurance practice of PwC Hong Kong, which reportedly helped some virtual banks to obtain licenses.

One of the difficulties is technology safety risk, which is also the HKMA's biggest concern, several industry insiders told Caixin.

Virtual banks are required to conduct comprehensive independent assessments of their technology risks, including an assessment of their cybersecurity risk under the Cyber Resilience Assessment Framework, before starting business. The HKMA has particularly strict standards on the technology used to verify users' identities.

Founders of the eight licensed virtual banks mostly have no banking experience, and it makes sense the HKMA is cautious on how to control the emerging business model's risks, Ng said.

The regulator's attitude is to explore together with the virtual banks how to make the technology meet the regulatory requirements, and at the same time to give a certain space and flexibility to the development of innovative companies, said Heidi Chui, a partner at local law firm Stevenson, Wong & Co.

In addition to technical requirements, the regulator also has concerns about the virtual banks' impact on traditional banks. The HKMA conducted an internal assessment of the impact on the market if all eight virtual banks opened for business in a short period of time, including the diversion of business from traditional banks and whether the virtual rivals can attract enough customers, according to two persons familiar with the preparation work. The number of openings so far has been only three partly because the HKMA intends to stabilize the market and control the pace of opening, they said.

A spokesperson for the HKMA didn't immediately respond to Caixin's request for comment.

Talent is another hurdle that has delayed progress. In recent years, the Hong Kong banking industry's demand for risk control and technical professionals has surged, and virtual banks face stiff hiring competition. Some virtual banks have tried to recruit technical workers from the mainland, but Hong Kong's social unrest since March 2019 and the outbreak of COVID-19 have made potential candidates reluctant to relocate to the city.

Some virtual banks set up teams on the mainland to work remotely. ZA Bank, the first to go into business, has most of its more than 200 employees in Shenzhen, while its Hong Kong office has about 60.

Frequent changes in management have also slowed progress. Steven Yu stepped down in June as head of the virtual Ant Bank, backed by Alibaba affiliate Ant Group. His successor, Michael Wang Lan, came from Livi Bank, one of the eight virtual banks approved by the HKMA. Livi Bank, backed by Bank of China Hong Kong and e-commerce giant JD.com, is one of the two virtual banks that haven't joined the HKMA's pilot program. People close to the bank told Caixin that several senior executives in the risk control and compliance departments left in the first half of this year.

For consumers, how well the virtual banks are prepared is directly reflected in the products and services they offer and whether they stand out among peers. So far, all three operating virtual banks offer deposit, loan and transfer services, and all brag about convenience and speed. ZA says users can open online accounts in two minutes, while users can get loans of as much as HK$1 million ($129,000) from Airstar Bank in five minutes with no need to provide supporting documents.

Like other consumer-oriented internet startups such as bike-sharing services, virtual banks initially rely on attractive promotions to compete for customers. ZA Bank offered interest rates as high as 6.8% on three-month deposits for the first 2,000 clients to sign up. Airstar Bank offers annual interest rates as high as 3.6% for a year, compared with around 0.001% at most conventional banks. WeLab Bank offers an interest rate of as much as 4.5% and an 8% cash rebate during the promotion period on card spending.

To differentiate itself from rivals, ZA Bank said it may integrate its parent ZhongAn's online insurance product into the virtual bank. Bank CEO Rockson Hsu said ZA also expects to launch a payment service by the end of the year.

WeLab Bank already offers a payment service. The bank announced a partnership on July 21 with MasterCard to launch numberless debit cards. Users can have both a physical card and a virtual card, which enables them to withdraw cash from 2 million ATMs globally and shop online.

Initially, the products of various virtual banks may be similar, but their long-term business strategies and thinking modes will differ, said Simon Loong, founder and CEO of WeLab Bank's parent company.

Virtual Banks can bring new blood to the Hong Kong banking industry, but industry barriers built by traditional players in the past century will not be easily broken, said an executive at a Hong Kong traditional bank. The newcomers will face even more challenges especially in the current economic downturn, the executive said.