Fast food giant McDonald's will spend 2.5 billion yuan ($381 million) over the next three years on a major expansion of its store-in-store McCafes in China, challenging rivals like Starbucks and KFC in a race to cater to a growing Chinese middle class with a taste for premium drinks.

Under the plan, McDonald's is aiming to have 4,000 McCafe's on the Chinese mainland by the end of 2023, according to an announcement earlier this week.

The company opened its first China McCafe in 2009, but the format was mostly confined to larger, more affluent cities until recently. It passed a major milestone with the opening of its 1,000th China McCafe in May this year, and expects to have 1,500 stores nationwide by the end of the year as it rolls out the concept in smaller markets.

The buildup comes as China's coffee market is expected to grow rapidly in the years ahead as the country's middle class expands and more people try out the beverage as an alternative to traditional tea-based drinks.

The market is expected to triple from 56.9 billion yuan in 2018 to 180.6 billion yuan in 2023, according market data firm Frost & Sullivan provided in the 2019 IPO prospectus for local chain Luckin Coffee. Over that period, the number of cups of coffee consumed in China each year is expected to double to 15.5 billion by 2023. The report pointed out that coffee consumption in China in 2018 was only 1.6% that of the United States. 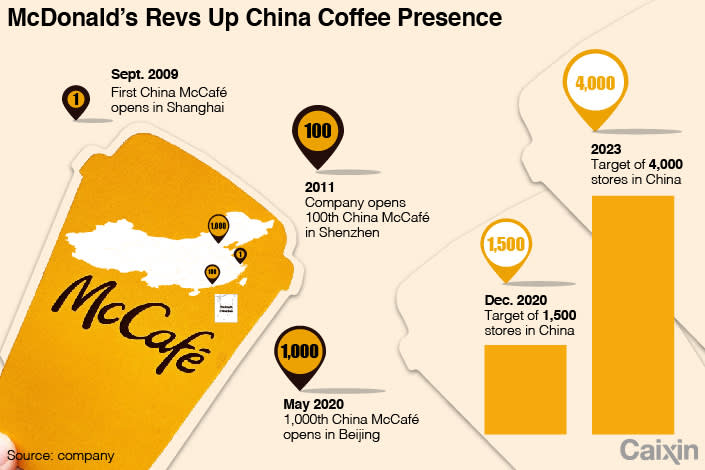 "As China's coffee market grows with speed, consumers will understand more about coffee and fall in love with it. Today, we're very pleased to announce the across-the-board brand-upgrade plan for McCafe," said Phyllis Cheung, CEO of McDonald's China. "Our goal is clear: Where there is McDonald's, there is McCafe."

McDonald's currently has about 3,600 restaurants in China, meaning less than half now have McCafes that typically have their own counters and seating within the bigger store. All coffee at the cafes typically costs no more than 20 yuan. That puts it squarely in the middle of the market in competition with local names like Luckin and global rivals like KFC and Canadian chain Tim Hortons, which has also recently embarked on an aggressive China expansion.

Starbucks is currently the clear market leader and charges a premium, with coffee typically averaging closer to 30 yuan per cup. It entered China two decades ago and now has around 4,700 stores in the market after opening 259 shops in its most recent fiscal quarter alone. Fewer than half the McDonald's hamburger restaurants in China feature in-store McCafe spaces. The chain is looking to bring the concept to smaller cities.   © AP

Homegrown rival Luckin briefly overtook Starbucks at the start of the year, in terms of store count, after a breakneck expansion. But it has been conserving cash and closing weaker outlets since a major accounting scandal in April and is now believed to have about 4,000 stores in the market.

In a nod to its cheaper pricing, the new McCafe expansion is particularly targeted at smaller markets. China's largest and most affluent cities like Beijing, Shanghai, Guangzhou and Shenzhen are already well served by the concept and are expected to have McCafes in all their stores by the end of the year. Next year the company said it will focus on similar targets for the second-tier cities of Nanjing, Hangzhou, Fuzhou, Xiamen, Tianjin, Chengdu and Suzhou.