Mystery of $2bn of loans backed by fake gold in China 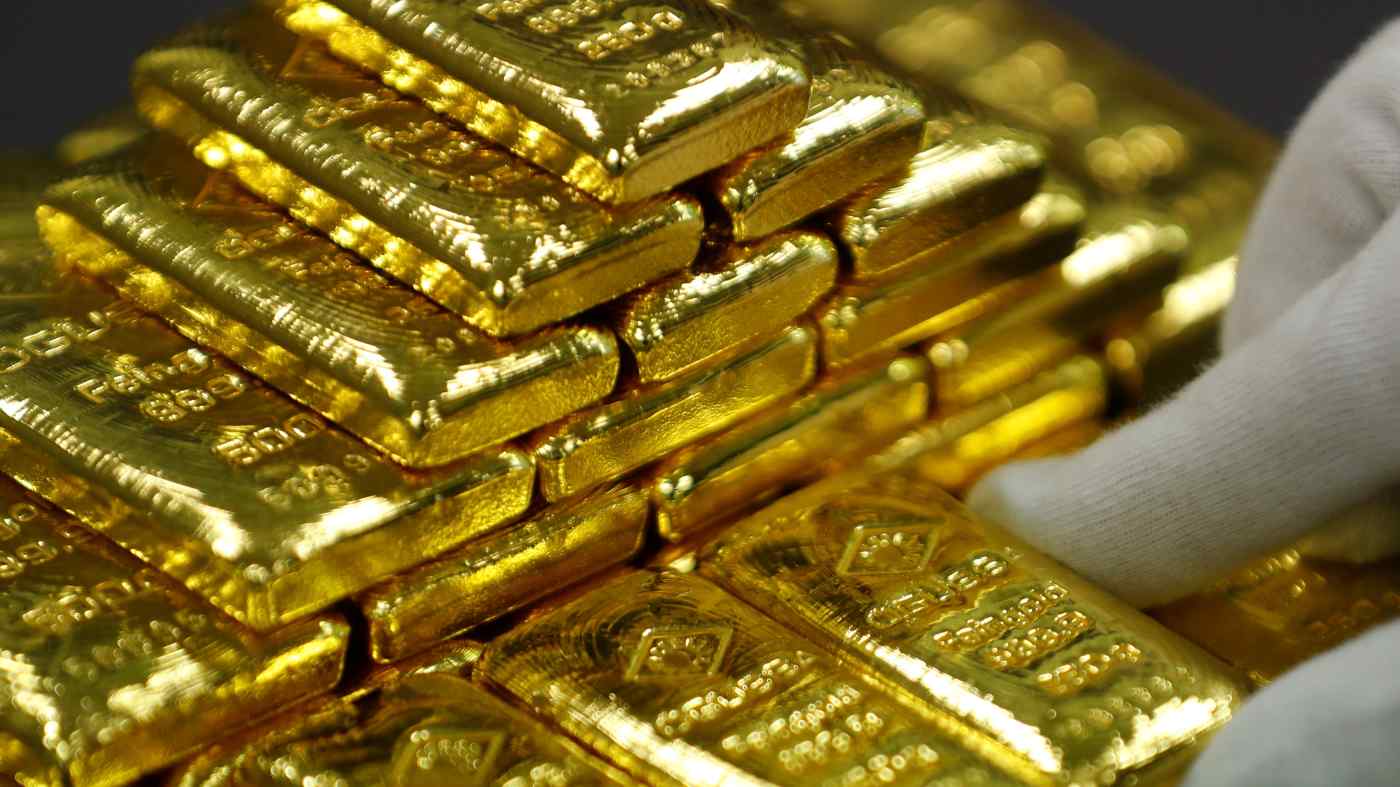 The 83 tons of purportedly pure gold that Kingold creditors held in their coffers as of June would be equivalent to 22% of China’s annual gold production.   © Reuters
WU YUJIAN, WU HONGYURAN, BAI YUJIE and HAN WEI, CaixinJune 29, 2020 15:27 JST | China
CopyCopied

More than a dozen Chinese financial institutions, mainly trust companies, loaned 20 billion yuan ($2.8 billion) over the past five years to Wuhan Kingold Jewelry Inc. with pure gold as collateral and insurance policies to cover any losses.

Kingold is the largest privately owned gold processor in central China's Hubei province. Its shares are listed on the Nasdaq stock exchange in New York. The company is led by Chairman Jia Zhihong, an intimidating ex-military man who is the controlling shareholder.

What could go wrong?

Well, plenty, as at least some of 83 tons of gold bars used as collateral turned out to be nothing but gilded copper. That has left lenders holding the bag for the remaining 16 billion yuan of loans outstanding against the bogus bars. The loans were covered by 30 billion yuan of property insurance policies issued by state insurer PICC Property and Casualty Co. Ltd. (PICC P&C) and other smaller insurers.

Authorities are investigating how this happened. Kingold chief Jia flatly denies that anything is wrong with the collateral his company put up.

The case holds echoes of China's largest gold-loan fraud case, unfolding since 2016 in the northwest Shaanxi province and neighboring Hunan. Regulators found adulterated gold bars in 19 lenders' coffers backing 19 billion yuan of loans. In one case, a lender seeking to melt gold collateral found black tungsten plate in the middle of the bars.

In the case of Kingold, the company said it took out loans against gold to supplement its cash holdings, support business operations and expand gold reserves, according to public records.

In 2018, the company beat a number of competitors bidding to buy a controlling stake in state-owned auto parts maker Tri-Ring Group. Kingold offered 7 billion yuan in cash for 99.97% of Tri-Ring. The Hubei government cited the deal as a model of so-called mixed-ownership reform, which seeks to invite private shareholders into state-owned enterprises. But Kingold has faced problems taking over Tri-Ring's assets amid a series of corruption probes and disputes involving Tri-Ring.

After obtaining the test results, Minsheng Trust executive said the company asked Jia whether the company fabricated the gold bars.

"He flatly denied it and said it was because some of the gold the company acquired in early days had low purity," the executive said.

In a telephone interview with Caixin in early June, Jia denied that the gold pledged by his company was faked.

"How could it be fake if insurance companies agreed to cover it?" he said and refused to comment further.

As of early June, Minsheng Trust, Dongguan Trust and a smaller creditor Chang'An Trust filed lawsuits against Kingold and demanded that PICC P&C cover their losses. PICC P&C declined to comment to Caixin on the matter but said the case is in judicial procedure.

A source from PICC P&C told Caixin that the claim procedure should be initiated by Kingold as the insured party rather than financial institutions as beneficiaries. Kingold hasn't made a claim, the source said.

Caixin learned that the Hubei provincial government set up a special task force to oversee the matter and that the public security department launched an investigation. The Shanghai Gold Exchange, a gold industry self-regulatory organization, disqualified Kingold as a member on June 24.

All that glitters is not gold

The 83 tons of purportedly pure gold stored in creditors' coffers by Kingold as of June, backing the 16 billion yuan of loans, would be equivalent to 22% of China's annual gold production and 4.2% of the state gold reserve as of 2019.

Founded in 2002 by Jia, Kingold was previously a gold factory in Hubei affiliated with the People's Bank of China that was split off from the central bank during a restructuring. With businesses ranging from gold jewelry design, manufacturing and trading, Kingold is one of China's largest gold jewelry manufacturers, according to the company website.

The company debuted on Nasdaq in 2010. The stock currently trades around $1 apiece, giving Kingold a market value of $12 million, down 70% from a year ago. A company financial report showed that Kingold had $3.3 billion of total assets as of the end of September 2019, with liabilities of $2.4 billion.

Jia, now 59, served in the military in Wuhan and Guangzhou and spent six years living in Hong Kong. He once managed gold mines owned by the People's Liberation Army. "Jia is tall and strong," one financial industry source familiar with Jia said. "He's an imposing figure and speaks loudly. He is bold, reckless and eloquent, always making you feel he knows better than you."

Several trust company sources said Jia is well connected in Hubei, which may explain Kingold's surprise victory in the Tri-Ring deal. But a financial industry source in Hubei said Jia's business is not as solid as it may appear.

"We knew for years that he doesn't have much gold -- all he has is copper," said the source, who declined to be named.

Local financial institutions in Hubei have avoided doing business with Kingold, but they don't want to offend him publicly, the source said.

"Almost none of Hubei's local trust companies and banks has been involved in (Kingold's) financing," he said.

Several industry sources told Caixin that the institutions were willing to offer loans to Kingold because Jia promised to help them dispose of bad loans.

Hengfeng Bank is the only commercial bank involved in the Kingold affair. The bank in 2017 provided an 8 billion yuan loan to Kingold, which in return agreed to help the bank write off 500 million yuan of bad loans, bank sources said. Kingold repaid half of the debts in 2018.

But the loan issuance involved many irregularities as access to the pledged gold and testing procedures was controlled by Kingold, one Hengfeng employee said.

The loan was pushed forward by Song Hao, former head of Hengfeng's Yantai branch. Song was placed under graft investigation in March 2018 in connection with the bank's disgraced former Chairman Cai Guohua, whose downfall led to a major revamp in the bank's management. In 2019, Hengfeng's new management sued Kingold for the unpaid loans and moved to dispose the collateral. But a test of the gold bars found they are "all copper," the bank source said.

It is still unclear whether the collateral was faked in the first place or replaced afterward. Sources from Minsheng Trust and Dongguan Trust confirmed that the collateral was examined by third-party testing institutions and strictly monitored by representatives from Kingold, lenders and insurers during the process of delivery.

"I still can't understand which part went wrong," a Minsheng Trust source said. Bank records showed that the vault where the collateral was stored was never opened, the source said.

Public records show Kingold's first gold-backed borrowing can be traced back to 2013, when it reached an agreement for 200 million yuan of loans from Chang'An Trust, with 1,000 kilograms of gold pledged. The two-year loan was to fund a property project in Wuhan and was repaid on time. Before this, Kingold's financing mainly came from bank loans with property and equipment as collateral.

Since 2015, Kingold has increased its reliance on gold-backed borrowing and started working with PICC P&C to cover the loans. In 2016, Kingold borrowed 11 billion yuan, nearly 16 times higher than the previous year's figure. Its debt-to-asset ratio surged to 87.5% from 43.4%, according to a company financial report. That year, Kingold pledged 54.7 tons of gold for loans, 7.5 times higher than the previous year.

A person close to Jia said the surge of borrowing was partly due to Kingold's pursuit of Tri-Ring. In 2016, the Hubei provincial government announced a plan to sell Tri-Ring stakes to private investors as a major revamp of the Hubei government-controlled auto parts manufacturer.

In 2018, Kingold was selected as the investor in a deal worth 7 billion yuan. According to the investment plan, Kingold's purchase of Tri-Ring was part of a strategy to expand into the hydrogen fuel cell business. But sources close to the deal said Kingold was attracted by Tri-Ring for its rich holding of industrial land that could be converted for commercial development.

A Dongguan Trust investment document shows Tri-Ring owns land blocks in Wuhan and Shenzhen that are worth nearly 40 billion yuan.

The deal drew immediate controversy as some rival bidders questioned the transparency of the bidding process and Kingold's qualifications. According to Kingold's financial reports, the company had only 100 million yuan of net assets in 2016 and 2 billion yuan in 2017, sparking doubts over its capacity to pay for the deal.

Despite the fuss, Kingold paid 2.8 billion yuan for the first installment shortly after the announcement of the deal. The second installment of 2.4 billion yuan was paid several months later with funds raised from Dongguan Trust.

In December, Tri-Ring completed its business registration change, marking completion of Kingold's takeover. However, the new owner has since faced troubles mobilizing Tri-Ring's assets because of a series of corruption probes surrounding the auto parts maker since early 2019 that brought down Tri-Ring's former chairman.

A major part of Tri-Ring's assets were frozen amid the investigation and subsequent debt disputes, limiting Jia's access to the assets.

Hobbled by the Tri-Ring deal, which cost billions of yuan but has yet to make any return, Jia's capital chain was eventually broken when Hengfeng Bank pushed for repayment, triggering a series of events that brought the fake gold to light, said a person close to the matter.

"Without the insurance coverage from PICC P&C, [we] wouldn't issue loans to Kingold as the collateral can only be tested through random picked samples," one person said.

PICC P&C's Hubei branch provided coverage for most of Kingold's loans, Caixin learned. All the policies will expire by October. As of June 11, 60 policies were still valid or involved in lawsuits. Wang Guangming, a lawyer at Dacheng Law Offices, said the key issue is what happened to the pledged gold and which party was aware of the falsification. If Kingold faked the gold bars and both the insurers and creditors were unaware, the insurers should compensate the lenders and sue Kingold for insurance fraud, Wang said. Insurers are also responsible to compensate if they knew of Kingold's scam but creditors didn't, Wang said.

If Kingold and creditors were both aware of the fake collateral, insurers could terminate the policies and sue the parties for fraud. But if insurers were also involved in the scam, then all the contracts are invalid and every party should assume their own legal responsibilities, Wang said.

PICC P&C said Liu's removal was due to internal management issues. It didn't answer Caixin's question about whether Liu was involved in the Kingold scandal.

Qu Yunxu and Liang Hong contributed to this story.