The president and his cabinet face a confluence of challenges as they kick off the first 100 days of the new administration.   © Reuters
ZENG JIA, DU ZHIHANG, LU KEJIA and HAN WEI, CaixinJanuary 27, 2021 00:01 JST | China
CopyCopied

After a bruising election that former President Donald Trump and his allies attempted to overturn, Joe Biden was sworn in last week as the 46th president of the United States, wrapping up one of the most dramatic political transitions in American history.

Now the real work begins for the 78-year-old Democrat, who faces the world's worst COVID-19 pandemic, deepening domestic political fissures, fractured international relations and the need to make up for four years of lost time in responding to the global climate crisis.

"There is no time to waste when it comes to tackling the crises we face," Biden wrote in one of the first tweets from his official presidential account.

The president and his cabinet face a confluence of challenges as they kick off the first 100 days of the new administration. The world's largest economy is suffering its worst public health crisis as the COVID-19 pandemic has claimed more than 400,000 American lives and ravaged businesses. The country is also struggling with the havoc wreaked by polarization and racial tensions. And the world is closely watching how the new government would attempt to restore America's global role after four years of retreat from international cooperation under the Trump administration. 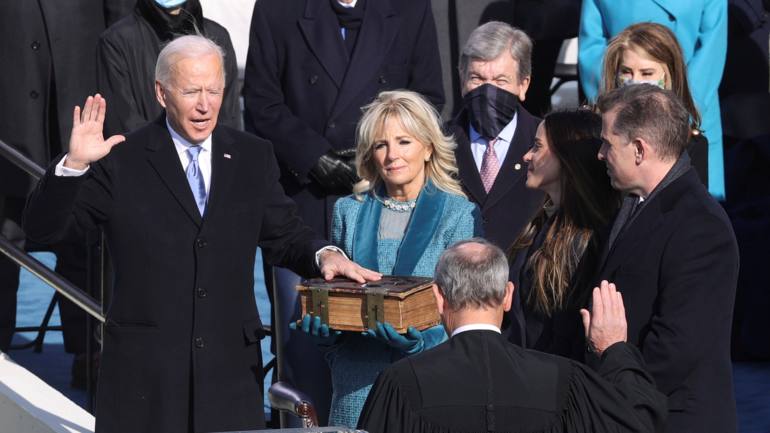 Joe Biden is sworn in next to his wife, Jill Biden, by U.S. Supreme Court Chief Justice John Roberts during his inauguration in Washington on Jan. 20.    © Reuters

"This is our historic moment of crisis and challenge. And unity is the path forward," Biden said Jan. 20 in his inauguration speech.

Hours after the inauguration, Biden signed a flurry of executive orders, actions and memorandums aimed at rapidly addressing the pandemic and dismantling many of Trump's policies. They included reversing Trump's travel ban targeting many Muslim countries, reforming immigration policies, imposing a mask mandate on federal property, ramping up vaccination supplies and requiring international travelers to provide proof of a negative COVID-19 test before entering the U.S. He is also moving to reverse Trump-era environmental rollbacks and rejoin the Paris climate accord while repairing U.S. relations with the World Trade Organization.

Biden's cabinet is lauded as one of most diverse in history, with a record number of women and women of color. Vice President Kamala Harris is the first Black and South Asian American and first woman to hold the position.

The most pressing task facing the Biden administration is to bring the pandemic under control. The virus has sickened more than 25 million Americans over the past year, and the death toll is on track to exceed 500,000 next month, by far the highest total for any country.

The outbreak showed signs of easing during the summer but rebounded in the fall. According to data from Johns Hopkins University, more than 27,000 new COVID-19 deaths were reported in the first 10 days of 2021, putting January on track to become the deadliest month so far.

During his campaign, Biden repeatedly declared his top priority would be containing the pandemic based on science and facts. His first executive order was to mandate mask-wearing on federal property and in interstate travel. He also ordered quarantines for travelers arriving in America in addition to a policy announced by the Centers for Disease Control and Prevention requiring virus tests for international travelers, effective Jan. 26. Before the inauguration, Biden also rejected Trump's plan to rescind travel bans on the EU, U.K. and Brazil.

He nominated California Attorney General Xavier Becerra as the first Latino to lead the sprawling Health and Human Services Department. Top infectious disease expert Dr. Anthony Fauci is to continue as director of the National Institute of Allergy and Infectious Diseases while serving as the president's chief medical adviser on COVID-19.

A key part of Biden's COVID response will be to quickly ramp up vaccinations. Biden set a goal of administering 100 million COVID-19 vaccine doses in 100 days, meaning the country needs to move five to six times faster than its previous pace.

As part of a $1.9 trillion economic relief proposal submitted by Biden to Congress, $400 billion would be for virus control, including $20 billion designated to fund the universal free vaccination program, $50 billion to expand virus testing and $130 billion to assist in the safe reopening of schools.

But some experts said they are concerned that Biden's virus relief plan still lacks details to guide implementation, such as measures to ensure vaccine supplies and production of necessary medical equipment, as well as tracking the vaccination progress of individual states.

According to the World Health Organization, a country can achieve herd immunity against COVID-19 only when vaccinations cover at least 70% of the population. Biden's 100-million-dose goal is far from enough for a country of 330 million, said Zhang Wenhong, a Shanghai-based infectious disease specialist. Congress rolled out rounds of economic relief plans totaling $4 trillion since the pandemic hit, but that is still not enough to bail out the economy from damage induced by the pandemic and the Trump administration's trade policies.

A January survey of economists by The Wall Street Journal turned up estimates that the U.S. economy shrank 2.5% in 2020 and projections it would rebound to a 4.3% expansion in 2021. Although the 2021 forecast is higher than the economists made a month earlier, some analysts said a surge of unemployment and bankruptcies caused by the pandemic might have triggered greater economic and financial risks.

America's unemployment rate stood at 6.7% in December, down from a peak of 14.7% during the pandemic. However, officials at the Federal Reserve said the jobless rate among the poorest may have topped 20% as sectors including catering and hospitality were hit hardest. The country's consumer confidence indicator dropped to a four-month low in December.

But there are uncertainties whether the proposal can win approval from Congress, as Republicans criticize it for adding to the Federal government's debt burden. A September report by the Congressional Budget Office estimated that the federal budget deficit reached $3.3 trillion in fiscal 2020, nearly triple the previous year's figure. The report predicted that U.S. government debt could exceed the size of gross domestic product in 2021, only the second time since 1946.

One of the frontiers expected for the new administration is to restore U.S. leadership in responding to climate change. Biden recommitted the United States to the 2016 Paris Agreement on climate, which Trump abandoned. He plans to host world leaders for a climate summit in April, a sign of the new president's commitment not just to rejoin the accord but also to strengthen it, according to Bloomberg.

Biden's commitment to combating climate change also sparked hopes that the U.S. and China would figure out a way to work together. Relations of the world's two largest economies dropped to a new low under the Trump administration as confrontations ratcheted up in trade, technology and other arenas. Donald Trump boards Marine One on the South Lawn of the White House on Jan. 20.    © AP

Biden also signaled an intention to reset relationships between the U.S. and its traditional allies that were damaged by Trump, rejoin the Iran nuclear deal and recalibrate U.S. strategy in the Middle East.

Several Obama veterans will anchor Biden's foreign policy team, signaling a return to a more traditional approach after four years of uncertainty and unpredictability. They include Secretary of State-designate Antony Blinken, who served as deputy secretary of state during the Obama administration; Jake Sullivan, former national security adviser to Vice President Biden; and John Kerry, Obama's secretary of state.

Blinken vowed during a confirmation hearing last week to restore American leadership on the world stage. He also backed a tough posture toward China, although he said he disagreed with Trump's approach.

Several Chinese experts said Biden's picks indicate that the new administration will continue to be tough on China with a focus on "intense competition."

The creation of the new post of coordinator for Indo-Pacific affairs reflects Biden's intention to deepen the U.S. engagement in Asia. Kurt Campbell, a key architect of Obama's U.S. pivot to Asia strategy, was appointed to take the position.

"America is back," Biden said in November when he introduced his foreign policy team. "Ready to lead the world, not retreat from it."