The rapid fall of China's most famous corporate raider A closer look at how the conglomerate wound up in this pickle reveals a familiar picture in the gallery of Chinese corporate debt crises: highly-leveraged expansion into sprawling businesses. The story has the added wrinkle of sibling rivalry as two brothers who were in business together split to go separate ways.

Baoneng's predecessor was founded in 1992 by Yao Zhenhua, who made a fortune in real estate, but the company never became an industry leader. In 2000, he entered the financial industry via life insurance and wealth management. In the summer of 2015, Baoneng launched a highly leveraged hostile takeover attempt against Vanke, then China's largest property developer. Much smaller Baoneng managed to leverage 45 billion yuan of borrowed money to become Vanke's biggest shareholder, but the bid failed after a regulatory crackdown, and Baoneng was forced to offload its Vanke holdings. Yao was banned from the insurance industry for 10 years for violations of insurance laws.

After that, Yao turned his sights on the industrial sector, new energy vehicles and cell phone manufacturing. In the past couple of years, Baoneng bought land in six cities, aiming to make at least 3.4 million cars annually. But so far, the company hasn't produced a single car after spending billions of dollars.

The first sign that the Yao businesses might be in trouble appeared when Yao and his younger brother, founding partner Yao Jianhui, split on how to run the company. Within Baoneng, Yao is often referred to by employees as the "big boss" and his brother as the "second boss."

Since 2014, Yao Jianhui has been in charge of Baoneng's property business, while the older brother runs other businesses. Both still hold stakes and positions in many of the same subsidiaries.

At the beginning of this year, Yao Jianhui declared at an internal meeting that he would quit Baoneng, citing disagreements with his brother on operations, a Baoneng insider told Caixin.

The two brothers diverged on business philosophy after the Vanke takeover bid, the Baoneng insider said. Yao Jianhui wanted to keep a low profile and focus on the property business, while the older brother preferred financial and capital market businesses. Yao Zhenhua believed that after Baoneng failed to become a leading real estate enterprise, it needed to expand elsewhere, the insider said. A pedestrian walks past the headquarters of Vanke in Shenzhen city, China in 2018.    © AP

In 2016, Yao Zhenhua founded Baoneng City Development & Construction, trying to follow a path different from that of traditional real estate developers. His new approach was industrial property, promising local governments to build up industry in return for land at low prices.

Last month, Ping An Securities sold 1.7 million shares of Shanghai-listed Jonjee Hi-Tech Ind. & Com. Group that were pledged by Baoneng. Since the beginning of this year, a number of lenders have been negotiating with Baoneng on debt repayment, Caixin learned. Baoneng asked the lenders to roll over the existing loans, while the lenders told Baoneng to repay as soon as possible or pledge more collateral.

Some of the collateral already put up might have been overvalued, two Shenzhen bankers familiar with Baoneng told Caixin.

"That's why the lenders are anxious right now," one banker said. "Even if they dispose of the collateral, it may not cover all the principal and interest on the debt."

As of June, Jushenghua had total assets of 571.5 billion yuan and total liabilities of 478.9 billion yuan, with an assets-to-liabilities ratio of 83.1%. The company faced short-term interest-bearing debt of 87.3 billion yuan, but the cash on its books was less than 4.6 billion yuan.

Meanwhile, Jushenghua's core business is losing money. In the first half, its main financial business generated 64 billion yuan of revenue, but expenses were 68 billion yuan. Its other businesses were slightly profitable but account for less than 10% of total revenue.

The subsidiary reported 2.4 billion yuan of profit for the first half but benefited solely from the investment income of subsidiaries and the disposal of equity in subsidiaries.

"Yao really wants to make cars," a person close to him told Caixin.

The same year, the auto unit acquired a 51% stake in Qoros Auto, a small Shanghai-based automaker, for 6.5 billion yuan. A year later, Baoneng spent an additional 1.56 billion yuan to increase its stake in Qoros to 63%. In 2019, Baoneng took over French automaker PSA's joint venture with Changan Automobile. Changan disclosed that it sold its 50% stake in the joint venture to Baoneng for 1.63 billion yuan. PSA didn't disclose the value of its deal with Baoneng.

Yao Zhenhua vowed to invest 10 billion yuan annually in the five years starting in 2018 to develop new vehicles and launch 26 models by 2022. Baoneng told Caixin it invested 50 billion yuan in the auto industry and established "a whole industrial chain."

Qoros produced 1,927 cars in the first half of 2021 and suspended production in July, according to the China Passenger Car Association. That's far from what Baoneng promised.

Several insiders from Baoneng Motors told Caixin the company didn't spend much on actual research and development except for the acquisitions of Qoros and Changan PSA. The company spent 869 million yuan to acquire land in Guangzhou to use for research and development, production and sales of new energy vehicles. It also bought land in five other cities with a goal of building capacity to produce 3.4 million vehicles annually. Baoneng will become a first-class auto maker in China within 10 to 15 years, Yao Zhenhua said last year at the launch of Baoneng Motors' Xian production base. 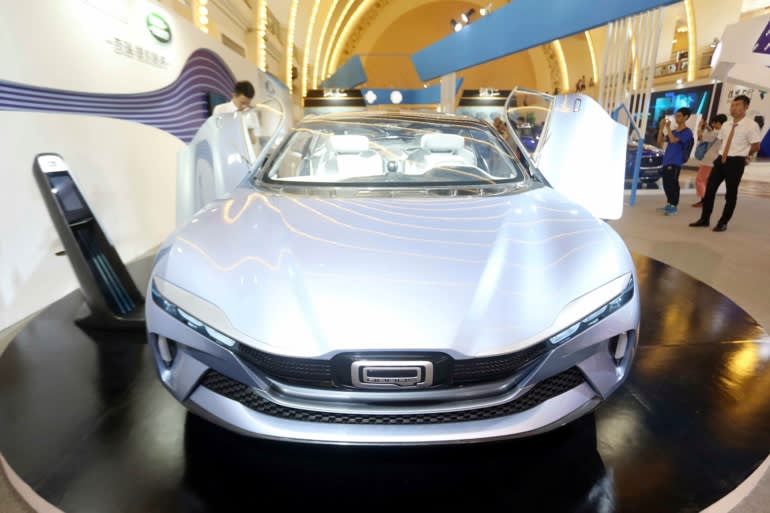 But Baoneng Motors never actually started making cars. When Caixin reporters visited its Guangzhou Industrial Park in December and June, the park looked abandoned with overgrown weeds in the plant and only a few workers.

"This is a big project. It will take many years to complete," a worker said.

Baoneng Motors told Caixin the construction is progressing slowly due to factors such as demolition delays and the pandemic. It intends to release a premium electric auto brand this year at the Guangzhou base to compete with Tesla and Nio, and the first model is expected to hit the market in 2021, the company said.

Meanwhile, even though the Guangzhou industrial park shows no progress, it was used to obtain billions of yuan of financing through the issuance of trust products.

The biggest problem for Baoneng Motors is that Yao Zhenhua doesn't know anything about the auto industry and doesn't trust professionals, a former executive at the company told Caixin.

"Both Baoneng and local governments believed that they could make cars as long as they put in money," he said.

Yao Zhenhua also entered cell phone manufacturing. Baoneng Mobile, which was founded in October with registered capital of 1 billion yuan, poached a whole team from Huawei Technology's cell phone operation. It recruited Samsung China executive Shu Can, who left after less than two months. Shu's strength was product development, a person close to him said. He left because he couldn't adapt to its corporate culture, the person said.

"This is exactly Yao Zhenhua's style," a person close to Yao told Caixin. "When he wants to do something, he puts money in to recruit people. Once he decides it's not going to work, he pulls back and cuts them all."

At its peak, Baoneng group had about 150,000 employees across all its businesses.

"At an average monthly expense of 10,000 yuan per person, Baoneng needs 18 billion yuan a year for human expenses," a former executive at Baoneng estimated. "All of its businesses can't even generate enough revenue to cover its human expenses and capital interests."

The Guangzhou local government finally decided to rescue Baoneng. Guangzhou Development District Holding Group, wholly owned by the Guangzhou government, agreed to provide 12 billion yuan of strategic investment to Baoneng Motors in a deal that valued the company at about 50 billion yuan, according to a person close to the government.

Yao Zhenhua has been meeting with officials from other local governments where Baoneng has projects and telling them the Guangzhou government agreed to an additional 12 billion yuan of investment.

Baoneng has close ties to the Guangzhou Development District. In 2017, Guangzhou was looking for private investors to take over an idle stadium built for the 2010 Asian Games. After the games, the government couldn't recover the initial construction costs and had to put up a large amount of fiscal revenue to repay loans each year. Eventually, Baoneng spent 3.7 billion yuan to take over the stadium, which is still idle.

But 12 billion yuan of investment is far from enough to pull Baoneng out of its debt crisis, the person close to the Guangzhou government said.

Starting in the 2020 second half, Baoneng tried to repay debt by selling assets, but there are few of them that can generate cash quickly.

"All its land and office buildings have been used for collateral on its loans, and the interest rates are not low," said one person familiar with the matter. The only liquid assets are Baoneng's holdings of listed companies' shares.

Since the 2020 second half, Qian Hai Life Insurance, another core subsidiary of Baoneng, has offloaded more than 370 million publicly traded shares.

It's not easy to offload large numbers of shares on the secondary market, a capital market participant said. If the shares are sold in smaller batches, it's very likely to push down prices. Therefore, Baoneng chose to pledge the shares it holds to financial institutions to borrow funds.

Baoneng has taken "strong" measures to actively raise cash, which will "ensure payment and maintain the credibility foundation accumulated by Baoneng in its 29 years of history," Yao Zhenhua said in August.

In a written reply to Caixin, Baoneng insisted that it has solid fundamentals and is only facing a stage of difficulty due to misallocation of funds.

Wu Yujian and Zhu Liangtao contributed to this report.