Shanghai Hongqiao International Airport: China's Transport Ministry expects only about a third as many people to travel during the Lunar New Year holiday this year as did so in 2019.   © Reuters
MA DANMENG, XU WEN, DENG YIYUN, HAO TIANQI and HAN WEI, CaixinFebruary 3, 2021 00:15 JST | China
CopyCopied

For Ma Changjiang, Wang Juan and many of the 300 million other migrant workers in China, there will be no once-a-year trip home to celebrate the 2021 Lunar New Year, due to restrictions aimed at preventing a resurgence of the COVID-19 pandemic.

Ma, a plasterer working in southern China's Guangdong Province, scrubbed his 1,000-mile trip home to northern China's Hebei Province before the start of this year's holiday on Feb. 12. He cited the rigorous quarantine and testing restrictions imposed by his village, which is about 1 km from Nangong, one of the cities in Hebei with the highest level of risk in a recent outbreak.

Domestic worker Wang won't be going home from Beijing to visit her husband and children in Jiaozuo, Henan Province, either. Under local policy, travelers from Beijing must quarantine for 21 days in designated hotels at their own expense.

"The holiday will be over after 21 days of quarantine," Wang said. "What is the point for me to go back?"

This year's holiday travel rush will be even smaller than last year's, as local governments across the country ramp up virus control measures ahead of what is usually the busiest travel season of the year. The Ministry of Transport estimated last week that there will be about 1.15 billion trips taken during this year's holiday season, the fewest on record since the government began releasing data in 2003.

A year ago, as the pandemic emerged, Lunar New Year travel fell by half from the 3 billion journeys recorded in 2019. This year's estimate is 20% lower than last year's, and the transport authority said the actual number of trips could be even fewer. Already the number of trips taken by road, rail, air and boat are down about 50% from the same period last year.

This year, China faces the challenge of preventing the virus from spreading more deeply into its vast countryside, especially during the Lunar New Year holiday when hundreds of millions of people normally travel from big cities to their hometowns. These concerns spurred local authorities to impose strict measures to stop people from coming. That has led to public criticism that some of the steps are excessive.

The rampant spread of the virus around the world means the threat to China from the pandemic will persist until large-scale vaccinations effectively contain the virus's spread globally, experts say. Until then, the country needs to develop more sophisticated and targeted virus responses that can prevent chaos and unnecessary costs. Different strategies should be designed to fit the needs of different regions, they say.

Globally, the novel coronavirus has sickened more than 100 million people and killed 2.2 million, according to Johns Hopkins University of the U.S.

The State Council, China's cabinet, issued an unusual call to the public on Jan. 25 for people to stay put and avoid nonessential trips during the Lunar New Year period. The government's message reflects mounting concerns that the annual Spring Festival travel rush, known as chunyun, will create increased risks that the coronavirus will spread.

As winter fell, China encountered its worst resurgence of the virus in nearly 10 months as new infection clusters were reported in several provinces. Between Jan. 2 and Jan. 28, more than 2,600 new cases were confirmed in northern China's Hebei and Heilongjiang and Jilin provinces in the northeast. In response to the wave of new infections, several cities reimposed lockdowns and conducted virus testing on millions of people.

In addition to its Jan. 25 notice calling on Chinese to "celebrate in place," the State Council also said people traveling within provinces will have to present a negative COVID-19 test result from the preceding seven days, starting Jan. 28. The cabinet urged people to quarantine at home for 14 days after arriving, and not to attend large gatherings.

Some areas' requirements are even stricter, requiring a negative result from three days prior to travel for those coming from higher-risk areas. Although Beijing has ordered local authorities not to add excessive requirements or block necessary travel, many localities have scrambled to strengthen controls, reflecting fears of infection risks from massive visitor flows during the holidays.

"Recent outbreaks in Hebei and the northeast sounded the alarm for us," said a county official in Henan, one of the largest sources of migrant workers from its vast hinterland.

The latest waves in northern China spotlighted the fragility of rural areas in the face of the virus, the official said. The official's county found in a survey that 40,000 people planned to return during this year's holidays, compared with about 100,000 last year, she said. The county is home to 200,000 migrant workers, according to the official.

Recent outbreaks in Hebei and Heilongjiang started in rural areas and spread quickly. Contact tracing later found that the wide spread was partly due to delays in discovering the earliest cases.

Compared with urban areas that have been fully equipped and are on high alert for the pandemic, many rural areas haven't encountered large outbreaks and were unprepared, said Wang Chenguang, a professor at Tsinghua University in Beijing.

On Jan. 20, the State Council issued a notice ordering local authorities to view epidemic prevention and management in rural areas as "a matter of the utmost importance," and to keep track of people returning to their hometowns ahead of the holidays.

"Disease control capacity in rural areas is weak, and controlling the epidemic is difficult, especially as the number of people returning home during the Lunar New Year rush markedly increases ... and further increases the risk of transmission," the National Health Commission (NHC) wrote in an article outlining virus control measures for rural returnees.

The biggest challenge in rural disease control is to enhance the capacity of local health institutions so that they can detect the virus quickly, said Lu Hongzhou, head of the Shanghai Public Health Clinical Center.

Big cities remain the focus of virus control, but policy documents indicate that more attention is being paid to rural areas, said Jiang Qingwu, a public health expert at Fudan University in Shanghai.

Following months of nationwide lockdown measures, China has largely brought domestic outbreaks under control since April, and gradually restored normal activity levels. Since then, authorities have sought to set up softer approaches to virus control to reduce the impact on social and economic activities. 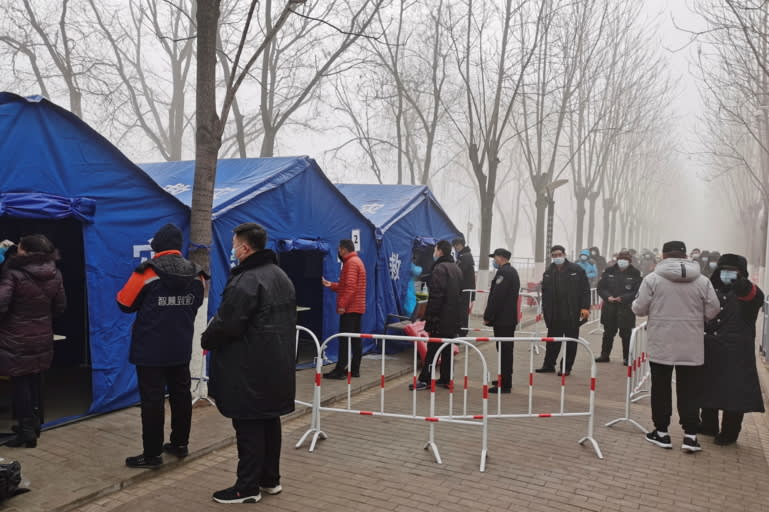 People line up for nucleic acid testing at a makeshift testing site in a park following a coronavirus outbreak in the Daxing district of Beijing on Jan. 26.    © Reuters

However, in the face of the recent spike in infections sweeping North China, and pressure from the holiday travel rush, some local authorities have again turned to drastic measures. For instance, in Tonghua, Jilin Province, an abrupt lockdown and lack of preparation left many residents without enough food and necessities when they were forced to stay home, exposing an emergency response failure.

Meanwhile, rounds of virus tests involving millions of people were ordered in many places, raising questions over whether the mass testing was necessary. In Shijiazhuang, Hebei Province, three rounds of nucleic acid tests were conducted on all 10 million residents over the past few weeks, while people in some districts with high risk levels were tested as many as five times.

Beijing also tested millions of people after several cases were reported in its southern district of Daxing.

Under the latest holiday travel rules issued by the NHC, a migrant worker who wants to return to rural Henan from Shanghai would need to take at least four nucleic acid tests during a round trip, according to Soochow Securities Co.

Some experts say that although rapid virus testing is crucial for tracing infections, it should be conducted taking cost into account, and the current expansive use could be excessive. In many cities, recent tests covering millions of people often detected only a few infections.

"I feel the current screening is excessive," said a public health expert in Beijing. "We've done tests for millions in many places and found nothing at the end. ... It is unnecessary to do it in some places, as community spread has been effectively controlled."

Aggressive measures by local authorities reflect concerns over their ability to control the virus, especially in rural areas, analysts say. Officials are also under pressure because they would be held responsible for any failure to contain an outbreak. Dozens of officials have been punished in Hebei and Heilongjiang for the recent resurgences.

Compared with most countries' strategies for slowing the virus's spread, China has stuck to a much more aggressive goal of eliminating domestic cases. Under this principle, localities across China will remain on high alert to eliminate new outbreaks probably until next year, one local official said.

But Shanghai's Lu is more optimistic. As the weather gets warmer and inoculations expand globally, the pandemic will gradually come under control worldwide, and people will "be able to travel home for the next Spring Festival," he said.