What to know about China's strategy for a new growth pattern 2020 was a turbulent year for both the Chinese and global economy as the COVID-19 pandemic disrupted business and society, forcing governments to loosen fiscal and monetary policies.

China's GDP grew 2.3% last year as the world's second-largest economy managed a steady recovery from the fallout of the pandemic, making it the only major economy to expand in 2020.

As 2021 is the first year covered by China's new five-year plan, all eyes are on the country's economic development and policy changes.

China's top policymakers have pledged to maintain continuity in macroeconomic policies this year by not making any "sudden turns" amid the recovery from the pandemic.

In an interview with Caixin, Yang Weimin, a deputy director of the economic committee of the national committee of the Chinese People's Political Consultative Conference (CPPCC), talked about China's economic outlook for 2021, unwinding the country's stimulus policies, expanding consumer spending and maintaining the manufacturing industry's share of GDP. The CPPCC's national committee is the country's top political advisory body.

Yang used to occupy a key post in China's top economic policymaking body, currently known as the Central Financial and Economic Affairs Commission, which is chaired by President Xi Jinping. From 2011 to 2018, he served as a deputy director of its general office, which is led by Xi's top economic adviser, Vice Premier Liu He.

The interview took place shortly before the start of China's largest annual political meetings, known as the Two Sessions, during which the country will set its full-year economic targets that are closely watched by politicians and economists around the globe. 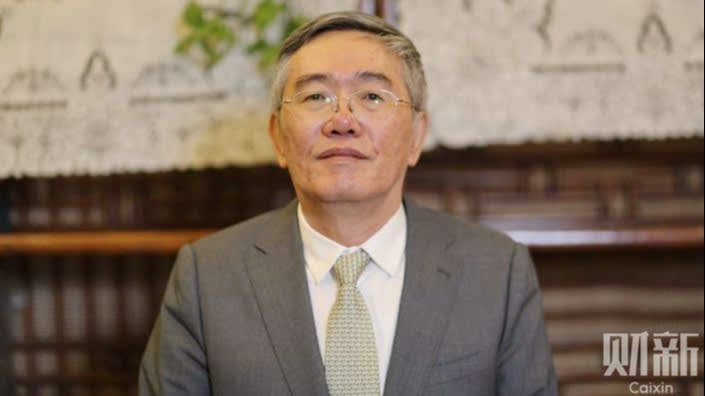 Caixin: It's widely forecast that China's GDP will grow by more than 8% in 2021. How do you see economic growth this year?

Yang: This year's economic growth will recover to at least 2019's level, 6%. There is not much pressure to boost growth, mainly thanks to last year's low baseline due to the pandemic, and the central government's pledge to maintain continuity in macro policies that support the economic recovery.

The economic recovery in the second half of 2020 benefited greatly from rapid growth in exports. Will China's exports manage to maintain a high growth rate and still account for a large share of the global total once other countries resume production this year?

In 2020, net exports contributed 28% to China's GDP growth, the highest since 2000. But this should not be seen as normal. The record is due to China's effective control of the domestic epidemic amid global disorder, and the country's abundant manufacturing capacity. Consequently, export growth sped up in the second half of last year, as China took the lead in production resumption.

If the world gets the pandemic effectively under control this year, the situation -- along with the global liquidity surplus and the appreciation pressure on the yuan -- will hurt China's export performance.

However, China's exports are highly resilient and cannot be replaced by other countries. Firstly, among China's 153 industries, 50 or so are export-oriented, accounting for about a third of the total. Secondly, China has some products that are internationally competitive and cannot be easily replaced, such as communications equipment, computers, electronic components, textiles and clothing, and metal products. Thirdly, China's exports are diversified, with 90% of the 153 industries able to export.

China's macro policies are returning to normal amid the economic recovery. What will the steps be leading up to exit the measures adopted last year to combat pandemic fallout?

This year, monetary policy will not be as loose as it was in 2020, when the broad M2 money supply grew 10.1%, 6.9 percentage points higher than nominal GDP growth of 3.2%. That was part of an effort to cushion the impact of the COVID-19 pandemic.

For fiscal policy, there is no need to keep the deficit-to-GDP ratio and government debt size as large as they were in 2020, but maintaining modest spending is necessary. For example, China may not issue special central government bonds to mitigate the fallout of the epidemic. Nevertheless, fiscal policy should increase support for income distribution, which is important for building up a new development pattern and advancing common prosperity.

Where will the momentum of China's economic growth come from during the country's 14th Five-Year Plan, which will run through 2025?

For example, to build a new development pattern, China should expand consumption. Human-focused urbanization, along with making it easier for rural migrants to get urban residency, will on the production side, create more demographic dividends, namely by increasing the number of hours that workers work over their lifetimes. On the income side, it will help migrants build a lifelong career, move into the middle-income class and increase their total lifetime income. On the expenditure side, it will increase consumer spending among migrants, thus supporting the expansion of consumption nationwide. This policy can link the three steps of production, distribution and expenditure, which builds a new development pattern. But reform is needed to address this issue.

In recent years and during post-pandemic recovery, China has had some difficulties boosting consumption. How can we stimulate consumption?

On the demand side, the first task is to expand household spending. The first thing to do is to adjust the distribution of the national income so that the income of residents grows faster than that of the government or corporate sectors. In other words, the proportion of residents' income to GDP needs to be higher.

The second is to reduce pressures on consumption, which mainly refers to preventing housing prices and mortgages from rising faster than residents' income. In particular, it's important to establish a housing system that encourages both purchasing and renting in mega cities.

From the supply side, we should improve the supply of consumption-based industries. There are currently many industries that rely heavily on imports to meet the demand of consumers, which means the domestic supply is insufficient and in turn impedes the expansion of consumption.

There are mainly four categories of industries that import more than they export.

The first are agricultural products in a broad sense, including dairy products, sugar and sugar products, and processed vegetable oil. Despite a shortfall in arable land in China, there remain resources to be made use of, such as a portion of unused rural homesteads.

Thirdly, tourism and related industries. Air and water transport, hotels and the restaurant and catering businesses have a high net import level, mainly because of an inadequate supply of high-quality domestic tourism services. We should encourage construction of travel-related infrastructure and improvements that increase the level of tourism services.

Fourthly, the culture industry. The publishing, radio, television, film, art, sports and entertainment industries all have a high net import level. The culture industry is consumption-oriented, and has great development potential.

In summary, these four types of industries are all promising. Before talking about expanding consumption, the currently unmet consumer demand in these businesses should be met domestically, which is part of the supply-side structural reform that the central government proposed in 2015.

In its suggestions for the 2021-2025 Five-Year Plan, China's ruling Communist Party proposed maintaining manufacturing's share of GDP. Why was this proposed? How can we achieve it?

The target is in response to the rapid decline in manufacturing's share of China's GDP after 2013.

China then began to rely on fast growth in the services sector to make up for the industrial slowdown and maintain relatively high economic growth. The services sector has grown rapidly in recent years. It now accounts for a larger proportion of GDP, primarily due to three types of industries: real estate and financial services; research and development and technical services, business services, information software and information technology services; and public administration, health, education, culture and other public services.

The real estate and finance sectors are taking up a greater share of the services industry. What impact is that having on the economy?

High housing prices could reduce consumer spending on other products and services. Residents' spending on real estate increased from 8% of their total consumption in 2002 to 13% in 2018.

Finance plays an important role in smoothing out the economic cycle. But if the financial sector grows too fast and too large, it will cause certain structural effects. The value added of banks -- a measure of their output -- means revenue for the lenders, but it is a cost and burden for those in debt. A faster increase in the value added of the banking industry implies a heavier burden on manufacturers, which is detrimental to the supply and demand in the manufacturing industry.

Manufacturers have a difficult and expensive time getting financing and loans to manufacturers make up a shrinking proportion of the total. At the same time, due to high interest rates, industrial companies' interest expenses are growing faster than their profits.

Also, the real estate and finance sectors have put pressure on residents' consumption, as more and more urban residents are burdened with mortgages. For example, from 2013 to 2019, residents' consumption as a ratio of local GDP decreased by 7.9 and 6.4 percentage points respectively in Beijing and Shanghai, where housing prices are extremely high, while the national average drop was 3.6 percentage points.

The decline in residents' consumption ratio reflects slower growth in the total retail sales. This has in turn led to slower industrial growth and increased downward pressure on the economy.

How can we change the fact that the real estate and financial industries account for such a high proportion of the economy?

Behind the demand structure is distribution. Amid the rapid urbanization of recent years, local governments have focused on urban construction, rather than making it easier for rural migrants to get residency where they work. However, without much money in hand, they have accumulated a large amount of implicit local government debt. To pay back these debts, local governments have to sell land at high prices, which in turn drives up housing prices. During the process, banks and property developers benefit the most, with the income distribution tipping in favor of these two industries.

Therefore, the 14th Five-Year Plan proposed balancing the development of finance and real estate with the real economy, which is an important measure to achieving the goal of ensuring that manufacturing's share of GDP remains stable.