What will China's Suning have to sell next? "Suning is not safe yet."

Yet that investment will do little to help Suning pay its 16 billion yuan debt that is due within a year, not to mention the more than 200 billion yuan of total debt the company and its subsidiaries owe. Suning's billionaire founder Zhang Jindong is still rushing to line up potential investors.

Nanjing-based Suning has been the largest private enterprise by revenue in Jiangsu Province since 2013. Just five years ago, the retailer was still comparable in scale to JD.com, whose goal then was to beat Suning and its rival Gome Electrical Appliances Holding. Now even though Suning has grown from an appliance retailer to a sprawling group encompassing multiple sectors, JD.com is valued 12 times more than Suning. In 2020, JD.com's revenue was more than 740 billion yuan, almost three times Suning's 260 billion yuan. 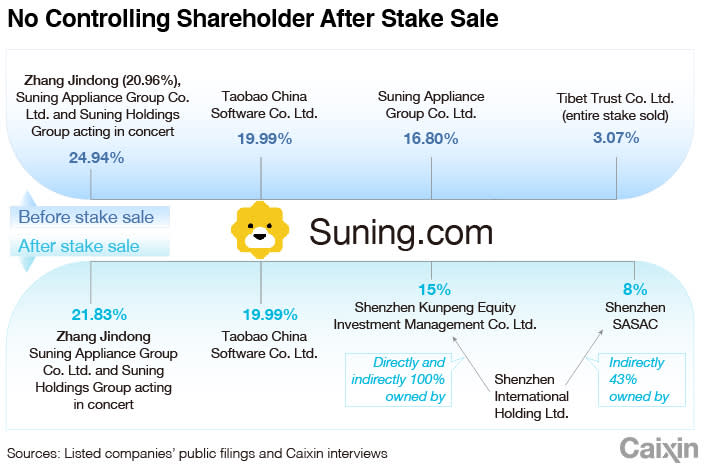 How did such a once-booming retailer run into a debilitating liquidity crisis while its rivals have ridden China's surging consumer market?

Analysts attribute the company's crisis to its business model: using massive leverage to fund expansion and acquisitions while its core appliance retailing business long lost money and relied on selling assets to bolster profits. Meanwhile, the buyers of the assets have usually been Suning's own nonlisted affiliates and Zhang and his son.

Based on several recent cases of large, debt-ridden listed companies, such liquidity crises occur mostly after all the assets have been stretched to the limit, according to the investor close to Suning. Even after the government bailout, the company still needs more funds while continuing to sell assets, the investor said.

Suning said on Feb. 28 that four of its five largest shareholders, including the founder, would sell a combined 23% of company shares for 14.8 billion yuan to Shenzhen International Holding and Shenzhen Kunpeng Equity Investment Management, both under the State-owned Assets Supervision and Administration Commission of the Shenzhen government.

The selling price was 6.92 yuan per share, 10% lower than the 60-day market average and about 70% lower than the record high in 2015. On the first trading day after the deal was announced, the stock exceeded the daily 10% limit but has since given up most of the gain.

The market is concerned about whether the bailout will be enough to save Suning. The investment can only temporarily ease Suning's liquidity pressure, and the key is whether the company can regain its cash-generating ability by improving operations and reducing costs, a bank executive in Jiangsu Province said.

Many market participants are not optimistic about Suning. A private equity fund that bought Suning's bonds in December has sold its entire holdings at a small profit. A manager at the fund told Caixin that Suning's biggest problem is its sprawling business and lack of public information on its use of funds, making it hard for outsiders to judge the company's income and the liquidity of specific assets.

"I've studied Suning for a week and I couldn't figure it out," the fund manager said. "This is a problem."

Suning's total liabilities, including those of the listed company and its parent's subsidiaries, may reach more than 200 billion yuan, the Jiangsu bank executive estimated. Caixin learned that China Construction Bank's Jiangsu branch is Suning's biggest lender. The bank did not respond to a request for comment. In the past few years, as Suning changed its name several times, an inconsistent strategy and divergent business model foreshadowed the debt crisis.

In the five years between 2015 and 2019, Suning's investments totaled 71.6 billion yuan, including 4 billion yuan of equity investment in state-backed telecom China Unicom and 4.8 billion yuan to acquire an 80% stake in Carrefour China.

In addition, Suning.com's parent company Suning Appliance Group, major shareholder Suning Holdings Grou and Suning Real Estate also have made a large number of investments. Both Suning Holdings and Suning Real Estate are controlled by Suning's founder. Due to the intricate shareholding relationship and the opaque financial situation, it is difficult to see the whole picture of Suning's vast investments.

Suning landed in its situation today mainly because of its inconsistent investments and disorderly expansion, said an investment banker in Nanjing. Suning's main retail business is heavily impacted by e-commerce and is losing money. But if it hadn't invested in cash-burning segments, its cash flow should have been enough to maintain normal operations, the banker said. 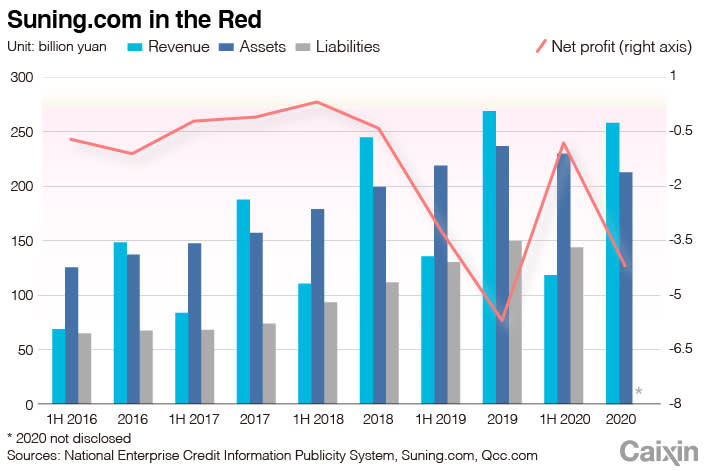 "Investment in sports broadcasting rights is bottomless, but Suning uses cash flow from its main business to subsidize PPTV, which is inconceivable logic," said the investment banker in Nanjing. Even deep-pocketed tech giants like Tencent and Alibaba Group can't build such a sports empire. With Suning's resources, it's even more difficult to support such a business, the banker said.

Suning also acquired 70% of Italian soccer club Inter Milan in 2016 for 270 million euros ($322 million). In its four years of ownership, Suning has invested 625 million euros in the club, according to a report from Italian news outlet Calcio e Finanza.

On the same day Suning announced the equity sale to Shenzhen government entities, the Jiangsu football club said it would cease operations, without elaborating. The club has not paid player salaries for several months, according to people close to the team.

Suning's expansion in its core retail business is not helping. Carrefour China, in which Suning bought an 80% stake in 2019 for $699 million, last year reported profit before tax for the first time in eight years, but there is little room for the supermarket chain to further control costs, according to a former executive at Carrefour China. Two years after the acquisition, Carrefour China and Suning are still two companies operating separately, and they have yet to achieve synergies in logistics, the former executive said.

After taking over Carrefour China, Suning also extended the payment period for suppliers from 60 days to as long as four months, causing the supermarket to lose some long-term suppliers, according to two of them.

What to sell next?

When operations generate a negative cash flow, Suning's usual practice is to sell assets at the end of the year to make its annual results look better.

In 2015, Suning sold a 68% stake in its PPTV unit for 2.6 billion yuan to a subsidiary of Suning Holdings. After the sale, PPTV -- with a loss of 1.2 billion yuan in 2015 -- was no longer included in the listed company's consolidated financial statement, increasing net profit of the listed company by 1.36 billion yuan. The sale officially closed on Dec. 30, effectively turning the full-year result to profit from a loss.

In the five years from 2015 to 2019, Suning's cash flow from equity and asset sales exceeded 45 billion yuan.

Now Suning faces the same question: What can it sell next?

Brokerage Huatai Securities is helping Suning go through its assets, seeking to raise funds from strategic investors, according to the investment banker in Nanjing. Suning.com owns a 3% stake in the brokerage.

One of the few attractive segments is Suning's financial arm, with about 2 billion yuan of profit last year. Suning Financial Services Shanghai operates as a consumer finance platform. In its last round of financing, the unit said it was valued at 56 billion yuan.

Caixin learned that Suning was in talks with Singapore-based logistics investment company GLP for a possible strategic investment, but no substantial progress has been made. Alibaba has also approached Suning Logistics.