Why TikTok may be back to square one with Trump A federal district judge blocked a key part of U.S. President Donald Trump's TikTok ban from going into effect Sunday night, even as its Chinese parent ByteDance has yet to form a plan for the popular video app that would satisfy either Washington or Beijing.

Following a 90-minute hearing Sunday morning, U.S. District Judge Carl Nichols rejected part of the U.S. Justice Department's argument that barring Trump's order would "infringe on the president's authority to block business-to-business economic transactions with a foreign entity in the midst of a declared national-security emergency."

Nichols' preliminary injunction temporarily halts the ban on new downloads of the video-sharing app, which would have gone into effect at 11:59 p.m. Sunday in Washington. The judge declined to grant an injunction on a separate set of prohibitions scheduled for Nov. 12 that are designed to further curb the app's use in the U.S.

TikTok's owner had filed a request Wednesday for an injunction against the ban.

The weekend courtroom drama continued months of twists and turns and uncertainties for the wildly popular short video app operated by China's ByteDance Ltd. Citing national security concerns about the service's data gathering, Trump in early August gave ByteDance a Sept. 15 deadline to sell TikTok. Then he ordered app stores to ban it effective Sept. 20 before extending the deadline until Sunday after he approved a tentative TikTok deal with Oracle Corp.

The ruling released 100 million American users from the threat of being unable to update their TikTok apps as of 11:59 p.m. Eastern Daylight Time Sunday. TikTok's popularity has been unaffected. TikTok remained the most-downloaded nongaming app globally in August, with 63.3 million downloads, a 1.6% increase from a year ago. It generated revenue of $88.1 million, more than six times that of last year, according to market research company Sensor Tower.

As of Wednesday, short videos bearing the hashtag "#SaveTikTok" attracted 1.3 billion views. Contents of the videos ranged from rage over the potential loss of the app to whether the fight would affect the November U.S. presidential election.

"Does Trump want to guarantee all the young people vote for Joe Biden?" asked Dr. Jennifer Lincoln, a gynecologist who teaches young people about sex and women's health, in an 11-second #SaveTikTok video posted Sept. 18. "Because right now, a vote for Joe is a vote for TikTok." Her TikTok account has 1 million followers. As of Saturday, the video had 143,000 views.

Pending the Washington judge's ruling, the TikTok situation seems to have gone back to where it was two months ago. The deal ByteDance came up with involving a transaction with American tech giant Oracle to address the Trump administration's objections so far falls short of what Trump originally ordered. And it's also very likely to be blocked by Beijing. China is unlikely to approve an "unfair" deal, the Chinese state-backed Global Times newspaper said in an editorial. 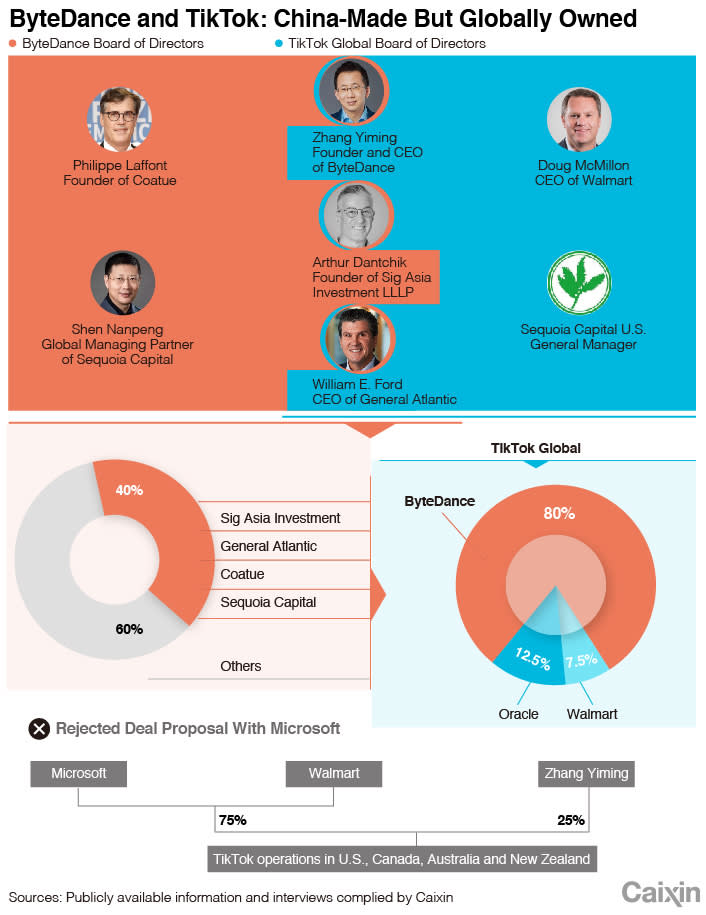 "It caters to the unreasonable demands of Washington," the newspaper wrote. "It's hard for us to believe that Beijing will approve such an agreement."

In the meantime, ByteDance applied for a tech export license from Chinese authorities. China's Ministry of Commerce and Ministry of Science and Technology added new technologies, including TikTok's core artificial intelligence technologies, to a list of those subject to export bans and restrictions. The change suggested Beijing would need to sign off on any deal to sell TikTok.

The move perplexed some market participants.

"What is TikTok doing?" an executive at a large U.S. hedge fund said. "Is Zhang Yiming still trying to sell TikTok?"

Whether TikTok is still for sale or how to structure a transaction now may not be up to Zhang, the founder and CEO of ByteDance. Conflicting messages from the Trump administration and ByteDance may derail any possible deal.

Over the past two months, ByteDance has pursued and been pursued by a slew of potential buyers, including Microsoft, Walmart, Netflix and several major global private equity companies. At one moment, a tentative deal was set with Microsoft, but ByteDance backed off and picked Oracle instead.

Sources close to the earlier Microsoft deal told Caixin that ByteDance rejected Microsoft because it believed the Ministry of Commerce would not approve the export of TikTok's algorithm for determining user preferences and delivering videos to keep people engaged, which is seen as the key to the app's success.

ByteDance said Sept. 21 in a Chinese-language blog post that the deal with Oracle wouldn't involve any transfer of TikTok's algorithm or key technology subject to Chinese regulatory approval. ByteDance said it would maintain control of its algorithm while Oracle would have the authority to check the source code of TikTok USA to ensure compliance. 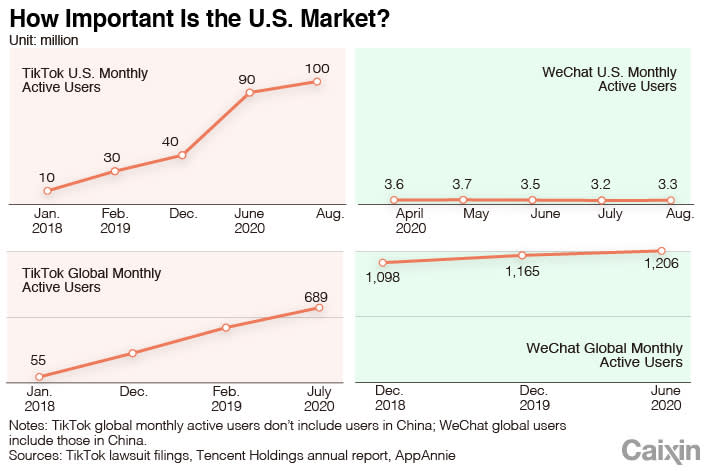 Under the Oracle deal, which is structured more like a cooperation than a sale, ByteDance would still own as much as 80% of the new TikTok Global, which would include the app's operations in the U.S. and the rest of the world excluding China. Oracle, Walmart and ByteDance agreed to list TikTok Global on an American stock exchange within 12 months. ByteDance said it is still trying to negotiate some terms of the deal.

Trump initially said he approved the deal "in concept." But one day later, he said he might rescind his blessing if ByteDance retained control of TikTok. However, he also said he expected Chinese influence to be diluted by a future public offering of the new company.

Although the deal is in no way secured, Oracle founder Larry Ellison's close relationship with Trump engendered expectations for final approval of the deal. Trump previously expressed support for Oracle's bid.

"I think Oracle is a great company, and I think its owner is a tremendous guy," Trump said in August. "I think that Oracle would be certainly somebody that could handle it."

Ellison publicly supports Trump and in February hosted a fundraiser for him at his California estate, with supporters paying $100,000 to play golf and have photos taken with Trump.

"We only have one president at a time," Ellison told Forbes magazine in an interview. "I don't think he's the devil -- I support him and want him to do well."

Senator Josh Hawley, a Republican from Missouri who is known for pushing a bill to ban TikTok on government devices, insisted that ByteDance should pursue a full sale of TikTok, its code and its algorithm to an American company.

"Any corporate shell game that leaves TikTok in the hands of ByteDance will simply perpetuate the original problem, leaving U.S. national interests and everyday users at serious risk," Hawley wrote in a letter to Treasury Secretary Steven Mnuchin.

Several other Republican senators, including Florida Senator Marco Rubio, have made similar requests, saying they opposed any deal in which Oracle would take "only a stake" in the U.S. business.

Even if Democratic presidential candidate Biden wins the election, that wouldn't necessarily affect TikTok's fate. Biden hasn't officially commented on the Oracle-TikTok deal, but his campaign team recently told staffers to delete the app from their personal and work phones for security reasons. Biden himself told reporters on a recent campaign trip that he sees TikTok as a "matter of genuine concern" and promised to review its security risks if elected.