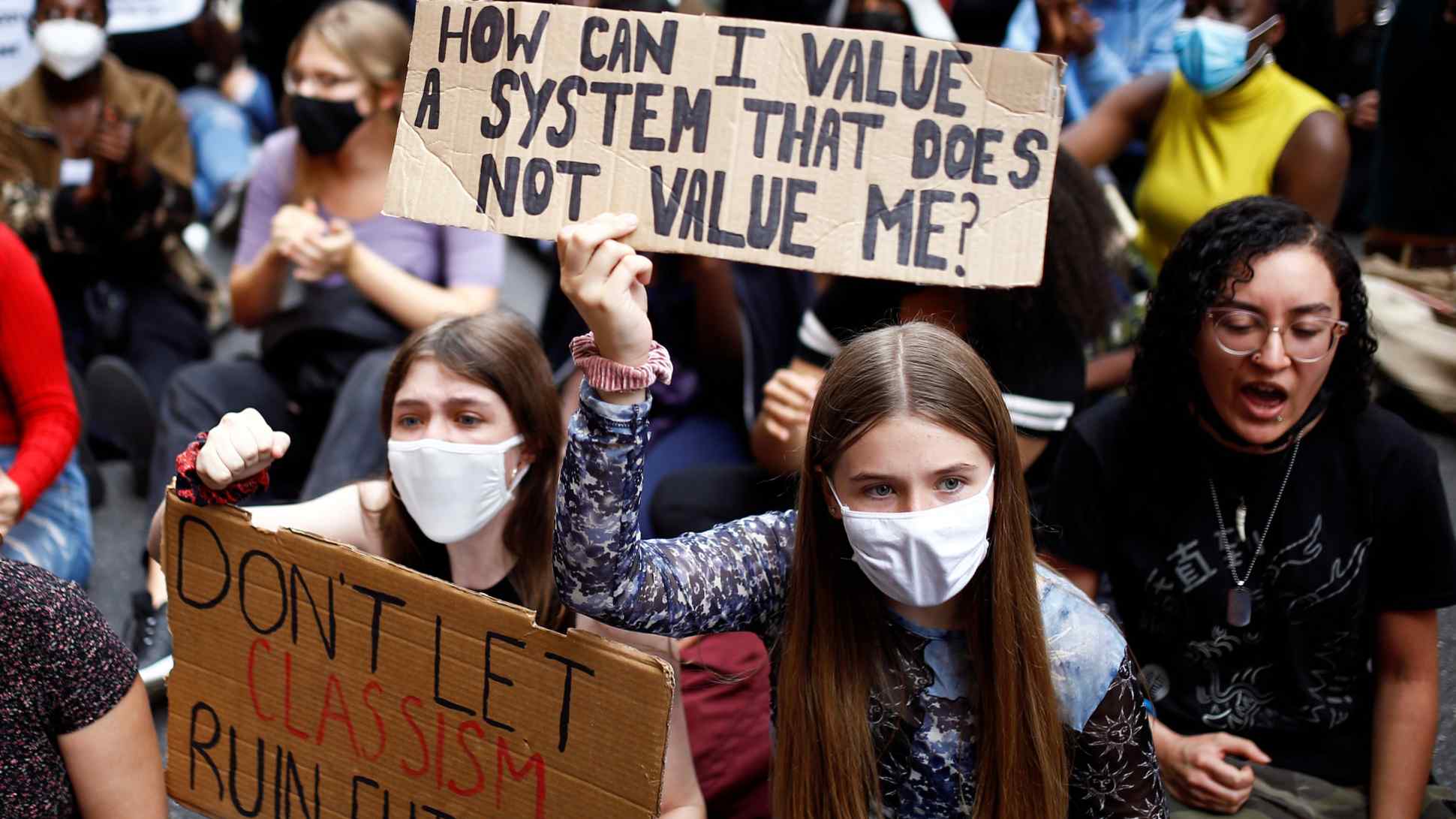 British high school students protest the grades assigned to them by an AI tool that appeared to discriminate against those from working-class families.   © Reuters
Century of Data

With tech at crossroads, will companies decide to benefit or exploit users?

TOKYO -- Swagatam Sen starts off his day in a way that most people might find strange.

"The first thing I do when I wake up in the morning is intentionally go to a website I have zero interest in," said the 39-year-old, who works at a financial institution in the U.K.

Around the clock, whether at work or during his personal time, Sen switches back and forth between websites he likes and those he does not, all to trick the artificial intelligence algorithms that track his online activity.

Social media platforms and other online services use AI to follow each user's day-to-day internet searches and browsing habits and determine what ads, search results or posts would be most appropriate for them. Worried that his knowledge would skew toward certain favored fields, Sen about a year ago began his quest to baffle the algorithms.

Tech companies have tried to harness AI to leverage troves of data, but the digital pollution they generate is making people's real lives worse. The industry stands at a turning point that could bring a "great reset" toward a brighter future -- if it can fully harness the potential of this technology. 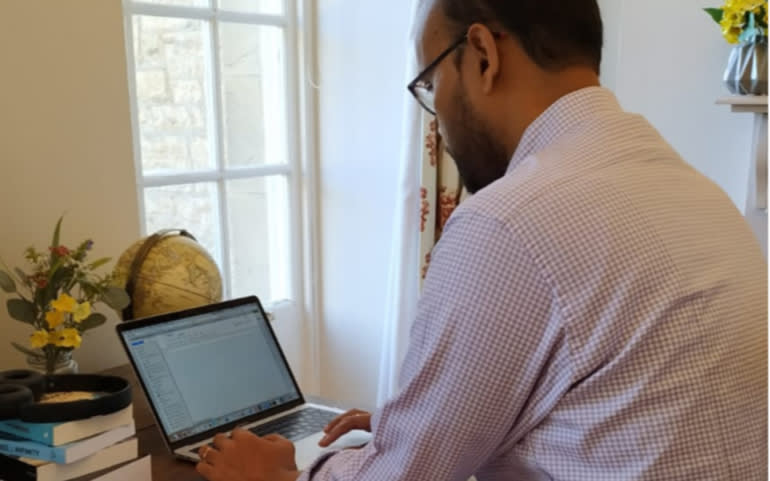 Swagatam Sen is on a mission to fool the AI algorithms that track his online activity.

Research company IDC estimates that investment in AI will double to $110 billion in 2024 from $50.1 billion in 2020. This will be nearly as much as what the auto industry spends on research and development.

All that spending is expected to have a major impact. According to the PwC professional services group, AI by the mid-2030s will make as much as 30% of today's jobs redundant.

Yet for all the talk of AI ushering in a new era, what seems most evident right now are its limitations. A study by research company Gartner found that 47% of AI projects stall in the research phase.

One of AI's biggest features is its ability to learn, but even as the technology has become used far more broadly, failures are easy to find.

Ask the hundreds of high school students who last August protested outside the U.K. Department for Education in London. Their university entrance exams had been canceled due to the pandemic, and the government used an AI tool to estimate grades. The tool would base its judgments on previous exam results, schools' historical grade distributions and other factors. Nearly 40% of the students received grades lower than what their teachers had estimated, and a disproportionate share of this segment came from working-class backgrounds.

"We would encourage the Government to apologize for risking the future careers of so many students," said student group Welsh Youth Parliament.

In the U.S., AI has made life-altering errors. Black men have been arrested after being misidentified by facial recognition software. Following pressure from rights groups, HireVue, which provides a platform for online interviews, in January said it had removed facial analysis screening from its service.

Nick Bostrom, a professor at the University of Oxford, has sounded the alarm, warning that AI is a technology with the potential to destroy civilization. Being dazzled by the ability of algorithms to process vast amounts of data while failing to control their negative aspects could prove devastating. Big Tech companies like Google, Apple, Facebook and Amazon are increasing their power to influence whole economies and societies.

There are growing concerns that as AI develops, diversity disappears.

AI ethics researcher Timnit Gebru was forced out of Google late last year over a paper warning of the risk of bias in language models. The move raised concern from other researchers that excluding critical voices like Gebru's flies in the face of good AI development.

Repercussions from the U.S.-China conflict are also spreading. Chinese search giant Baidu last year withdrew from the Partnership on AI, an international alliance that addresses AI development issues; other members include Apple, Intel, IBM and Sony.

If companies and countries prioritize their own interests, AI that can make fair and unbiased decisions will become an even more distant prospect.

AI is a sharp-edged tool born of the modern era, but it cannot correct failures on its own; only humans are capable of carrying out that task.

A European Union draft proposal of what would be the world's first set of restrictions governing the use of AI surfaced in April. It calls for banning governmental bodies from using the tech to attach social credit scores to individuals.

The rules would police the use of high-risk AI by corporations by putting the programs through prior screening by regulators. Violators would face stiff fines.

For example, if the tool spots an image that shows a woman with flowers, or a man playing baseball, it would alert developers of potential stereotypes.

Of course, humans will be the ones to make final decisions on what to do with suspect data. Princeton has open-sourced the tool and made it available for collaborative upgrades. 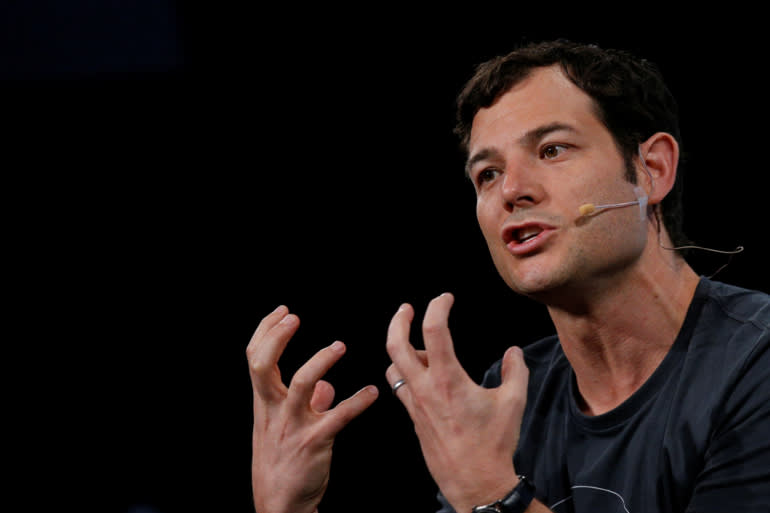 ”Fossil fuels, sugar, nicotine and algorithms are all dangerous, and every effort should be made by regulators to take away the financial incentives to continue using them," insists Tim Kendall.   © Reuters

Kendall likens the cravings produced by algorithms to those of nicotine addiction. Ironically, he once assisted in Facebook's growth as director of monetization. Under Kendall's watch, the platform's algorithms pushed postings and ads that match a user's preferences, helping keep eyes right where Facebook wanted them.

Kendall turned over a new leaf after realizing he had become a social media junkie himself. His nose would often be stuck in his smartphone right before going to sleep.

"Products that compete with our sleep for profit are unsustainable and dangerous," he said. "I hope that we see a paradigm shift toward more of these human-centric services designed to benefit users, not exploit them."

Ever since the discovery of fire, the human race has struggled between the good and evils of new technology while pursuing further innovations.

The same applies to AI: The invention is not meant to be perfect, but it can serve as a tool for our individual betterment. Through the dint of trial and error, and resolving pressing issues, the great reset that promises to maximize the dividends of AI's development has begun.