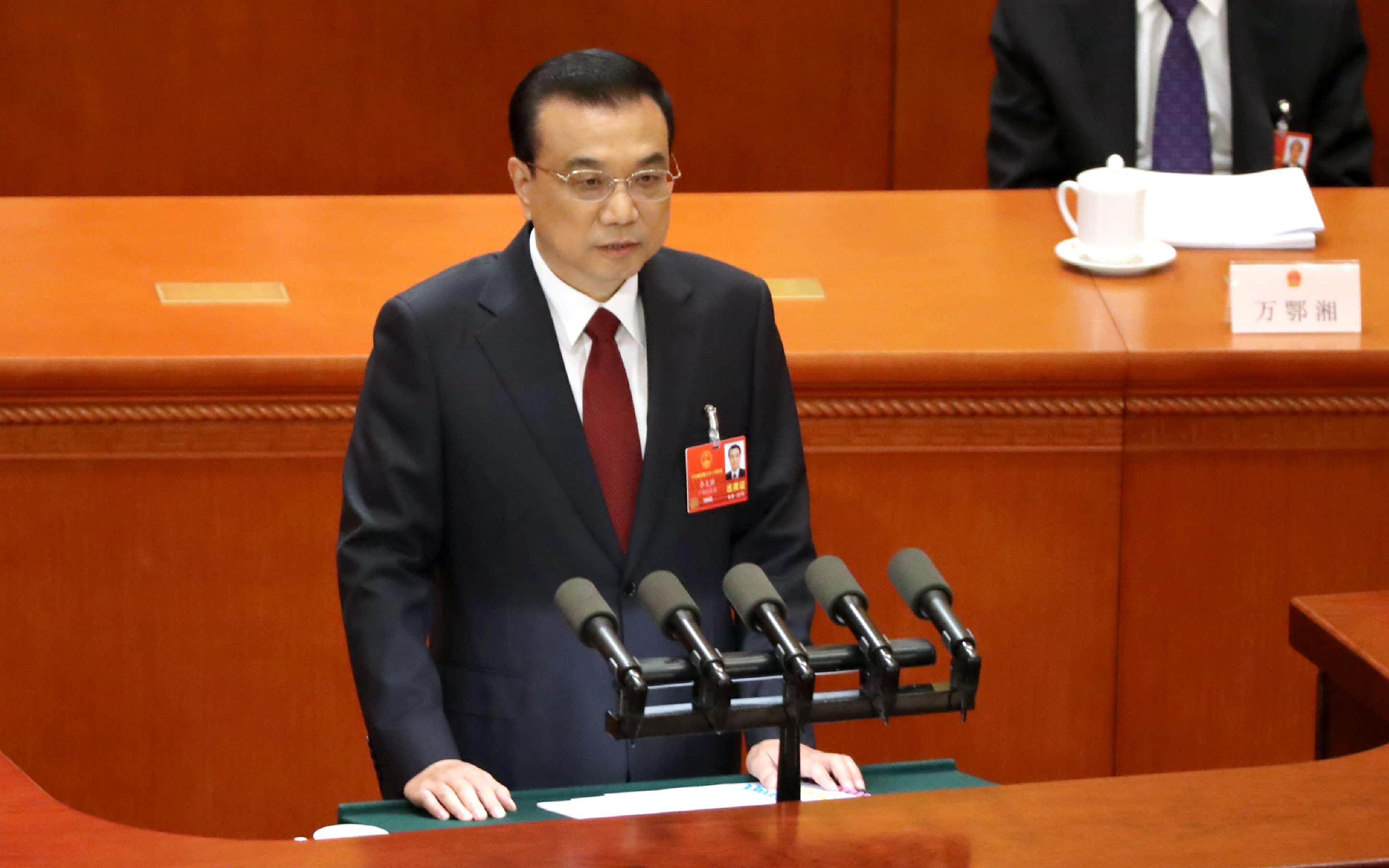 BEIJING -- China on Monday said its economy is expected to grow around 6.5% in 2018, highlighting the country's aim of accommodating slower growth to focus on reining in financial risks.

Prime Minister Li Keqiang told the National People's Congress during the legislature's annual sitting that while growth remains strong amid the recovery in the global economy, China will focus on pressing ahead with its reform agenda.

"The [target is] fitting given the fact that China's economy is transitioning from a phase of rapid growth to a stage of high-quality development," Li said at the opening of the over two week-long congress, addressing some 5,000 delegates gathered here in the Great Hall of the People.

The growth target, lower than last year's 6.9%, reflects Beijing's priority to keep debts incurred by its state-owned enterprises and private sector from getting out of control. Li warned that structural issues and other underlying problems have become more "acute," putting downward pressure on the economy.

In particular, the government will further crack down on loss-making "zombie enterprises," dilute  its ownership in SOEs and increase supervision of the so-called "shadow banking" sector and internet finance.

Beijing also trimmed its budget deficit target for the first time in five years, to 2.6% of gross domestic product. Last year the figure was 3%. Li said this "proactive" move is possible due to sustained economic growth and increasing revenue.

Meanwhile, the country's military spending will rise 8.1% from 2017, according to a budget report. The budget will likely heighten fears about China's growing assertiveness in Asia and beyond.

"We will stick to the Chinese path in strengthening our armed forces and resolvedly safeguard national sovereignty, security and development interests," Li said. The prime minister said this is in line with the party's goal of building a stronger armed forces that seek to modernize border, coastal and air defenses.

The world's second-largest economy grew 6.9% in 2017, bucking a slowdown since 2010 and beating the 6.5% target set around this time last year in the Government Work Report. The report is delivered by the premier every year to kick off the annual congress. Growth was supported by exports, as well as investments in infrastructure and real estate. The economy has been cooling off after nearly a decade of double-digit growth that began in 2003.

The projection for 2018 is within the range marked by economists, who expect Beijing to implement measures set by its top leadership to contain risks in the financial system.

President Xi Jinping said during the Communist Party's five-yearly meeting in October 2017 that China had to safeguard the economy in order achieve the mid- to long-term plan of creating a "prosperous" society based on socialism.

Mizuho Securities is less upbeat about China's outlook, expecting tighter monetary conditions and the continued scrutiny of investments in line with the top leadership's pronouncements. The investment bank, which has a 6.3% growth forecast for 2018, said in a Feb. 26 research note that growth will be driven by trade, domestic consumption and income growth.

China's economy has come under pressure in recent years from mounting debts chalked up by state-owned enterprises and the private sector. The threat of a property market bubble remains a major concern for Beijing, underpinned by lower borrowing costs provided by the country's shadow banking system.

Over the next three years, whether China can sustain growth will depend on how the government encourages productivity gains while keeping inflation and asset bubbles at bay, said Diana Choyleva of London-based Enodo Economics.