Chinese President Xi Jinping at the opening session of the Chinese People's Political Consultative Conference at the Great Hall of the People in Beijing on Saturday.   © Reuters
Politics

China carried out a 4 trillion yuan ($630 billion at current rates) stimulus package after the 2008 global financial crisis to put the economy back on a track toward growth. But corporate debt has swelled since then amid heavy lending by state-owned banks, rising to 167% of gross domestic product by June 2016 from 97% at the end of 2007.

The International Monetary Fund has warned that financial crises have historically followed sharp increases in debt. With the U.S. Federal Reserve raising interest rates, Chinese businesses face a race against time to pare down their liabilities. A crisis rooted in Chinese turmoil could deal a serious blow to the global economy.

But the government work report delivered by Li at the start of the annual National People's Congress stated that "China's economic and financial risks are on the whole manageable."

The country has used gimmicks to lower its corporate-debt-to-GDP ratio. For instance, debt-to-equity swaps were used to convert a total of 1.3 trillion yuan in debt into equity between 2016 and September. But this has not obviated the need for reform, since all it did was kick the can down the road.

In another effort, the government has offered subsidies and loans to low-income borrowers to purchase housing stock in outlying cities, essentially transferring developer liabilities to the state and to individuals. The ratio of household debt to GDP jumped 5 percentage points on the year at the end of June, while government debt as a share of GDP climbed 2 points. The solutions offered by the work report centered on tighter state control: stronger oversight of financial institutions, forced corporate reorganizations and a crackdown on illegal financing. Regulators are already freely slapping banks with fines and other penalties.

The report paid particular attention to the issue of local government debt. People's Bank of China Gov. Zhou Xiaochuan has cited it as the core of the debt problem, noting that local governments have borrowed through financing vehicles that are counted as businesses when tallying debt.

Local governments will issue 1.35 trillion yuan in special bonds this year, up 550 billion yuan from 2017, according to the report. The increase is a desperate effort to discourage them from borrowing illegally. While official data shows outstanding local government debt at 16 trillion yuan as of the end of last year, the IMF says the actual figure passes 30 trillion yuan.

Xi shows little appetite for market-based solutions, such as relaxing restrictions on stock issuance to strengthen underdeveloped capital markets that have exacerbated the debt problem. Though the work report calls for increasing "the proportion of direct finance, particularly equity finance," China postponed plans to reform its initial public offering system for a second time in February, this time until 2020.

The report also made no mention of the market playing "the decisive role" in allocating resources. This phrase had appeared in work reports since 2014 after Xi introduced the idea in 2013.

The root of the debt problem at local governments lies with overly ambitious growth targets, which encourage borrowing in order to fund unnecessary investment to pump up GDP.

Though Xi now advocates a focus on quality rather than quantity of growth, the 2018 work report kept the country's annual economic growth target at around 6.5% in order to continue working toward the goal of doubling GDP by 2020 from 2010 levels. This year's edition did not include the phrase "higher if possible in practice" as the 2017 report did, and an official in the Communist Party's Central Committee said this is not a do-or-die target.

Yet local governments do not see it that way. The city of Tianjin set a growth target of 5% for this year, the lowest in China. But senior officials consider this an absolute minimum and are pushing instead for 6% growth, a local staffer said. 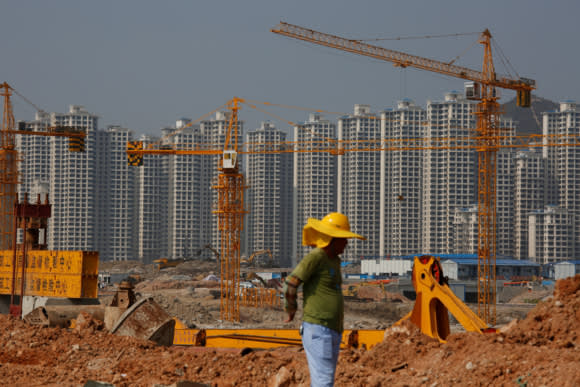