Chinese Premier Li Keqiang speaks at the news conference following the closing session of the National People's Congress, at the Great Hall of the People in Beijing, China March 20, 2018.   © Reuters
China People's Congress 2018

Ahead of new tariffs, premier urges Washington to lower restrictions on tech exports

BEIJING -- With a barrage of new U.S. import tariffs looming, Chinese Premier Li Keqiang struck a conciliatory tone on trade on Tuesday as his nation's annual legislative session wrapped up.

"A large [U.S.] trade deficit is not something that we want to see," Li told reporters at an annual press conference marking the closing of the National People's Congress session. "We want to see balanced trade, or otherwise this kind of trade would not be sustainable."

To get there, Li called on Washington to ease restrictions on China's purchases of high-tech goods that are now in place in the name of protecting U.S. national security. "We hope this important means for balancing U.S.-China trade relations would not be missed because that would mean missing a good opportunity for making money," he said.

Early in this month's legislation session, Chinese Foreign Minister Wang Yi had warned that Beijing would be prepared to retaliate over new tariffs. Li's softer comments come as the Trump administration is reportedly finalizing plans to announce new tariffs that would cover $30 billion to $60 billion in Chinese imports. Reuters reported on Tuesday that the president would likely announce a package of measures on Friday, with tariffs covering products related to a U.S. complaint over intellectual property rights, including telecommunications equipment and electronic goods.

A 25% tariff on $60 billion of Chinese imports, combined with a proportionate response from Beijing, "would reduce China's GDP growth by around 0.1 percentage points in 2018 and somewhat less in 2019, with a slightly smaller impact in the U.S.," wrote Louis Kuijs, head of Asia economics for research company Oxford Economics, in a research report on Tuesday.

He forecast that China is likely to respond to Trump's announcement with "strong protests," limited trade measures, and extra inspections, tests and procedural delays for U.S. companies investing in and trading with the country.

"Beijing will not want to be seen as being soft vis-a-vis the U.S.," he wrote. "[But] a restrained response would allow China to keep 'the moral high ground' as a supporter of globalization and the rules-based multilateral trading system."

In a closing address to the National People's Congress earlier on Tuesday, President Xi Jinping also struck a generally conciliatory tone. "China will never seek hegemony or engage in expansion," Xi said in a live broadcast. "Only those who are accustomed to threatening others see everyone as a threat." 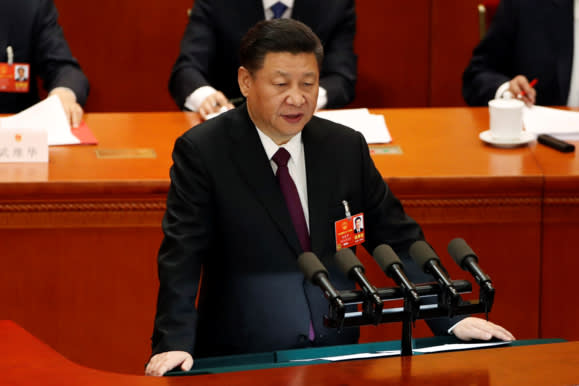 Xi Jinping speaks at the closing session of the National People's Congress in Beijing in March.   © Reuters

His reassurances however were tempered with his strongest warnings yet for anyone who could be seen as attempting to split off Chinese territory.

"Any actions and tricks to split China are doomed to failure and will be condemned by the people and punished by history," Xi said in comments that could be seen as directed as groups pushing for the formal independence of self-ruled Taiwan or the self-determination of Hong Kong or the western regions of Xinjiang and Tibet, or at India, Bhutan, Japan or Southeast Asian states which each have unresolved territorial disputes with Beijing.

"It is not allowed and absolutely impossible to separate an inch of the country's territories," Xi said. In his own comments, Li added, "We must not tolerate any attempt or proposition for Taiwan independence...and any external force using Taiwan as a card to cause difficulties in cross-strait relations."

Li said that China would open its markets further for foreign investors in sectors including healthcare, education, financial services and manufacturing and scrapping requirements for technology transfers, a key issue in the U.S. intellectual property complaint. He added that Beijing will also reduce import tariffs, especially on consumer goods, and pledged to phase duties on medicines, especially anti-cancer drugs.

Li appeared to dismiss suggestions that China might dump its holdings of U.S. government debt amid escalation trade tensions. "China diversifies the investment of its foreign exchange reserves on the basis of market principles and China will remain a responsible long-term investor," he said. "A stable China-U.S. relationship is in the interests of both countries and the whole world. I think it is unnecessary to worry about developments regarding China's [use of its foreign reserves]."

China's reserves also give it plenty of ammunition to safeguard its financial system, Li said. "China has the ability to prevent systemic financial risks; no such risks will occur in China," Li claimed.

"We have the confidence about meeting all major economic and social development targets this year," Li said, including cutting the country's deficit-to-GDP ratio. He noted that government revenues rose more than expected in the first two months of the year.

Asked about the potential summit between the leaders of the U.S. and North Korea, Li said that Beijing hopes that all countries involved show sincerity to take more concrete action.

Regarding Japan, Li said he will "actively consider" visiting the country for a trilateral meeting with South Korea in the first half of the year.