What to expect from China's top-level political meetings

Seven things to watch as thousands of delegates converge on Beijing

March is an especially political time in China, with the annual meetings of two top-level national political bodies, the National People's Congress and the Chinese People's Political Consultative Conference. The meetings bring together about 5,000 delegates from around the country, including ones representing the special administrative regions of Hong Kong and Macau. They are all converging at the Great Hall of the People in Beijing for two weeks starting March 3. Here are seven things to watch this year:

Already, 2,958 delegates have voted to remove the constitution's two-term limit for the offices of president and vice president. Only two delegates voted no, three abstained and one ballot was spoiled. The vote required a two-thirds majority to pass.

The presidential post is largely ceremonial, with much of the government machinery running through the State Council led by Premier Li Keqiang. President Xi Jinping's real power comes from his position as general secretary of the Communist Party and chairman of the Central Military Commission.

Neither the party nor the commission limits the top leader's term of service. Removing the presidential limit of two 5-year terms from the constitution would allow the 64-year-old Xi to serve past 2022. It would also do away with a party norm that leaders step down by age 68, thus putting any leadership succession plans on hold.

2. The return of Wang Qishan

Wang Qishan, a key ally of Xi, has been elected as his vice president. Given Wang's reputation as "Mr. Fix-it" in his nearly half-century career, he is expected to step out of his largely ceremonial role and contribute to the ongoing institutional reforms, and to diplomacy. 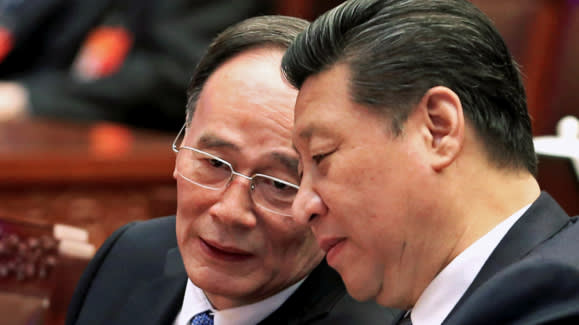 3. The inclusion of 'Xi Jinping Thought' in the constitution

Symbolism and ideology are key elements in Chinese politics. Delegates have added "Xi Jinping Thought on Socialism with Chinese Characteristics for a New Era" to the state constitution. The doctrine was added to the party's constitution during the party's National Congress in October. It spells out Xi's vision for China to restore its national pride and succeed economically.

The president then laid out two long-term development goals to be pursued through the centennial of the government's founding in 2049, envisioning China as a "great modern socialist country that is prosperous, strong, democratic, culturally advanced, harmonious and beautiful."

These ambitions would be pursued alongside the modernization of the military, and the expansion of China's international role.

4. Stronger teeth in the anti-corruption fight

Provisions for the establishment of a new anti-graft body called the National Supervisory Commission was written into the constitution. The commission, which will come under the cabinet, will independently oversee lower-ranked units nationwide, bolstering Xi's fight against corruption at all levels. Work will be coordinated with the judiciary and government prosecutors. The top leadership of the legislature will not hold positions on the commission to ensure its independence.

The party's anti-graft body will be merged into the commission, giving it the power to investigate disciplinary matters involving both party cadres and government officials.

Premier Li opened the congress with the Government Work Report. He unveiled an economic growth target of 6.5% for 2018, and set military spending to rise 8.1% from the previous year.

Under the 2018 government budget, spending will rise 7.6% to 20.983 trillion yuan ($3.63 trillion), with revenue forecast at 18.317 trillion yuan.  The government is expected to introduce further reforms to mitigate financial risk and address environmental challenges.

The world's second-largest economy grew 6.9% in 2017, above the target set last March, but it is expected to slow in line with the leadership's guidance of prioritizing quality over a high pace of growth. Market players expect tighter monetary policy, which may impact the stock and property markets. To meet the Communist Party's promise to double per capita income by 2020 from 2010 levels, the economy has to grow at least 6.5% yearly for the next three years.

Apart from the appointment of a new vice president, four vice premier posts on the State Council, or cabinet, have been filled by senior party leaders, including Liu He, Xi's top economic adviser. Liu is expected to work closely with new central bank governor Yi Gang to restrain the growth of debt and curtail financial risks.

Top diplomat Wang Yi has been promoted to a higher cabinet ranking as one of five state councilors, while maintaining his foreign minister portfolio. Wei Fenghe, commander of the People's Liberation Army Rocket Force, which manages the nation's missiles, has been named defense minister.

He Lifeng and Zhong Shan will keep their positions as chairman of the National Development Reform Commission and minister of commerce, respectively.

Beijing will resume shaking up its state-owned enterprises as well as the private sector to address mounting corporate debt. Financial instability arising from debt defaults is the last thing that the government wishes to see and it is expected to put in policies to ensure liquidity in the banking system. Among the deleveraging measures expected will be moves to allow greater foreign ownership of domestic corporations in certain sectors, liberalization of mergers and acquisitions and further promotion of debt-to-equity swaps.

The asset management industry will come under the gun, with implicit investment return guarantees disallowed and product issuers regulated under a single framework to mitigate risk in the capital market.