BEIJING -- As China's Communist Party prepares to choose its leaders for the next five years, all eyes are on the makeup of the powerful Politburo Standing Committee, which President Xi Jinping looks to fill with close allies.

The party's twice-a-decade National Congress, which will elect a host of officials including members of the party's Central Committee, begins Wednesday, and will run through Oct. 24, a spokesperson for the event said Tuesday. The day after it ends, the new central committee will hold its first meeting, and choose the elite few who will occupy the coveted standing committee seats, of which there are currently seven.

Chinese President Xi Jinping, who is to be awarded his second term at the congress, and Premier Li Keqiang are seen as certain to retain their posts. According to party sources, Li Zhanshu, a close ally of Xi's who now serves as director of the Communist Party's general office, seems set to gain admission to the standing committee. He will likely succeed anti-graft czar Wang Qishan -- who has surpassed the party's customary retirement age of 68 and who many expect will leave the leadership team -- as the president's political right-hand man. 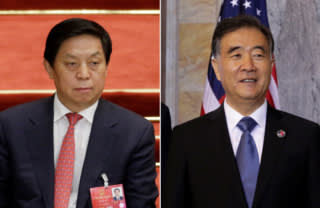 Vice Premier Wang Yang is also expected to gain a seat, and to be appointed chairman of the National People's Congress, China's national legislature. While Wang is a close ally of Hu Jintao, Xi's predecessor as president, he is also a canny administrator, and "will act in accordance with Xi's instructions," a party source said.

Han Zheng, the party's chief in Shanghai, is thought to be another strong contender, having developed ties to Xi during the president's tenure in that city. This connection could trump his close association with former President Jiang Zemin. Han could also be up for roles including head of the People's Political Consultative Conference, China's top political advisory body.

Looking down the road

How the other seats are filled could shed light on who may be in line to succeed Xi as president five years from now. Chen Min'er and Hu Chunhua, the party chiefs of Chongqing and Guangdong Province, respectively, have been floated as possible standing committee candidates. Achieving a chair on the elite council would position them to take over the top spot when the time comes. But few expect Xi to name his successor outright -- not least because the president himself may be angling for additional terms.

Other Xi allies, including Zhao Leji, head of the central committee's central organization department, and Wang Huning, director of the central committee's central policy research center, have also been mentioned as possible members. The president aims to have those loyal to him occupy a majority of the standing committee, ensuring he remains fully in control of the political process during his second term.

And while stiff opposition from other forces within the party seem set to prevent Xi from keeping graft-buster Wang Qishan on the standing committee, the president will likely find a place for his old friend and ally in some other key post -- perhaps an economic position that makes use of Wang's skill at crisis management.

The party congress will also take up proposed changes to the party constitution, almost certainly adding guiding principles that reflect Xi's political ideology. Mentioning Xi by name in the charter would put the leader on a par with Mao Zedong and Deng Xiaoping in China's political pantheon.

Xi will also present a party work report Wednesday, and is expected to use the opportunity to articulate his long-term vision for China leading up to 2049, when the People's Republic will enter its 100th year.