BEIJING -- A lack of younger faces on China's revamped Politburo Standing Committee is reinforcing the perception that President Xi Jinping does not intend to choose an heir anytime soon. The Communist Party on Wednesday announced the new seven-member lineup of the top governing body, one day after it wrapped up a twice-a-decade congress in the capital.

Xi, 64, and Premier Li Keqiang, 62, are the only holdovers. The five new members are Li Zhanshu, Wang Yang, Wang Huning, Zhao Leji and Han Zheng, all of whom are 60 years old or older.

Chongqing party boss Chen Min'er and Guangdong party chief Hu Chunhua, who were considered rising stars and possible Xi successors, were left out, although they were appointed to the lower-level 25-seat Politburo. President Xi Jinping greets the press as the new members of the Politburo Standing Committee are presented at the Great Hall of the People in Beijing on Oct. 25.   © Kyodo

The unofficial retirement age for a Communist Party official is 68.

As Xi approaches his second-five year term, the composition of the roster appears to reflect his interest in extending the typical two-term limit for a Chinese leader.

During the week-long party congress, Xi also managed to imprint his political thoughts and name into the Communist Party constitution, elevating his standing to that of former leaders of Mao Zedong and Deng Xiaoping.

On Wednesday, Xi again highlighted his vision of turning China into a "great modern socialist country" -- a blueprint he laid out in his opening remarks at the congress -- and his ongoing efforts to boost the slowing economy.

Click here for the profiles of the new "China Seven." 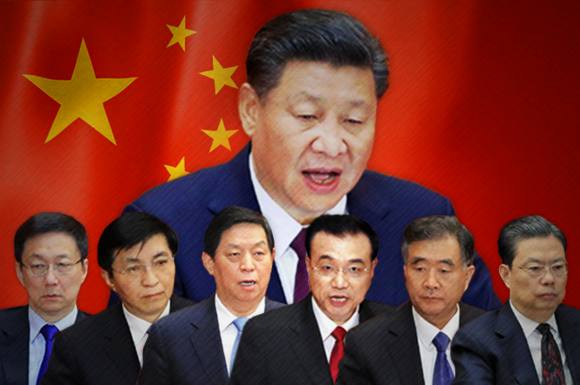 "With decades of hard work, socialism with Chinese characteristics has entered a new era," Xi said. "In this new context, we must get a new look, and more importantly, take new actions." Xi again stressed the importance of the "Two Centennials," namely, the 100th anniversaries of the establishment of the party in 1921 and the founding of the People's Republic of China in 1949, as he looks to fulfill his "Chinese Dream" and achieve a "great revival of the Chinese race."

The Chinese leader also paid tribute to Deng for his predecessor's decision four decades ago to finally open the Chinese market to the world, saying the move was critical in boosting China's fortunes in the global arena.