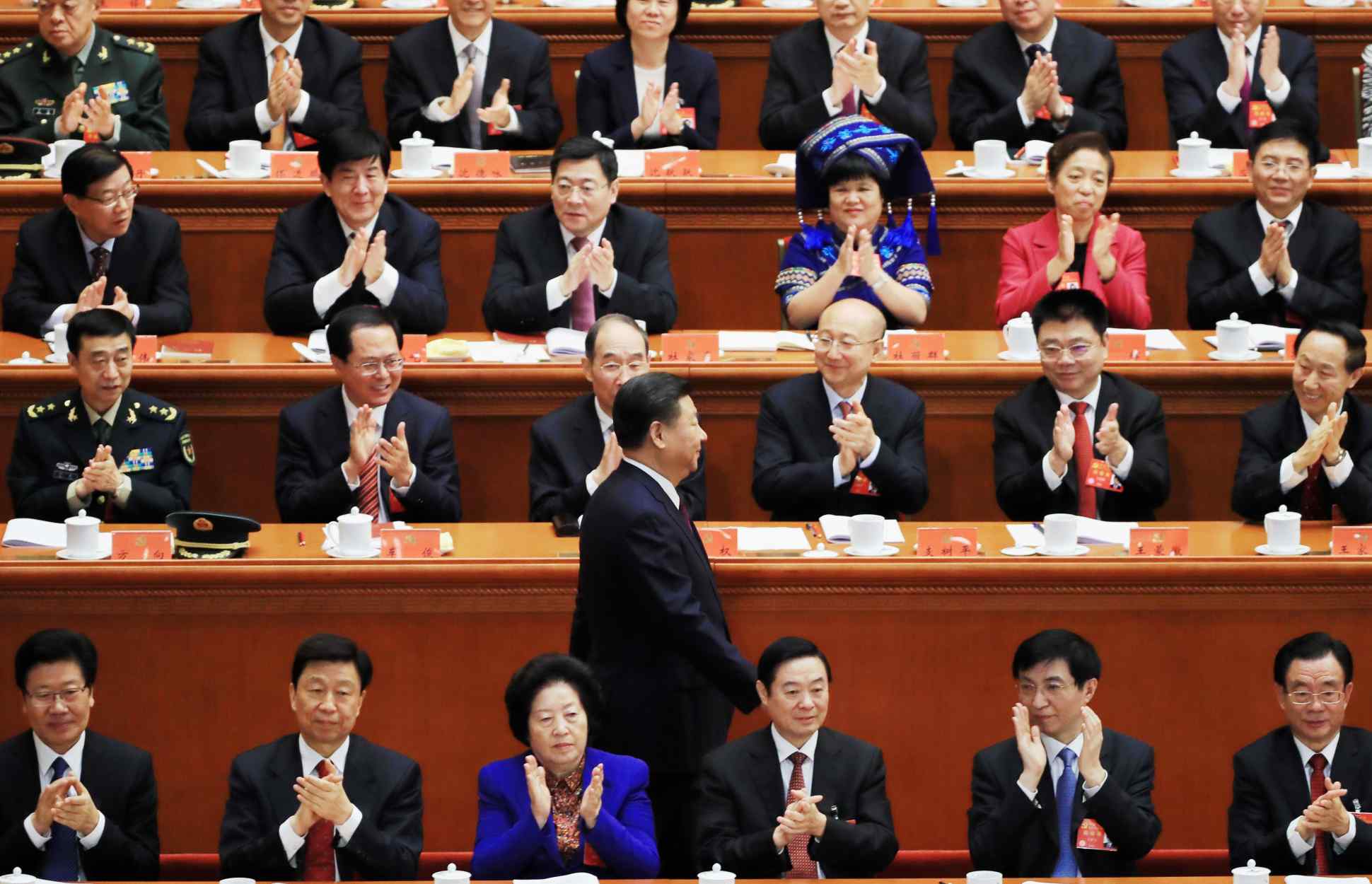 Chinese President Xi Jinping arrives for the opening of the 19th National Congress of the Communist Party of China on Oct. 18 in Beijing. (Photo by Akira Kodaka)
Economy

BEIJING -- Chinese President Xi Jinping kicked off the Communist Party's twice-a-decade congress Wednesday with a 3 1/2-hour keynote speech. In it, he reflected on the progress made during the five years of his first term and outlined a blueprint for the country in his second term and beyond.

While Xi touched upon a wide range of topics in the exceptionally lengthy address, we are highlighting five excerpts from his words followed by brief commentaries.

On progress over his first term:

"No place has been out of bounds, no ground left unturned, and no tolerance shown in the fight against corruption. ... The anti-corruption campaign has built into a crushing tide, is being consolidated, and continues to develop."

Over the past five years, Xi has been known for his relentlessness in clamping down on corruption, partly as a means to crush his political rivals and consolidate power. Following the successful campaign, he may now be able to defy the conventional 10-year limit on a Chinese leader's grip on power.

On time frame and blueprint:

"Based on a comprehensive analysis of the international and domestic environments and the conditions for China's development, we have drawn up a two-stage development plan for the period from 2020 to the middle of this century. In the first stage, from 2020 to 2035, we will build on the foundation created by the moderately prosperous society with a further 15 years of hard work to see that socialist modernization is basically realized. ... In the second stage, from 2035 to the middle of the 21st century, we will, building on having basically achieved modernization, work hard for a further 15 years and develop China into a great modern socialist country that is prosperous, strong, democratic, culturally advanced, harmonious and beautiful."

The key phrase here is "great modern socialist country." According to Xi, China will reach "new heights" in material, political, cultural, social and ecological advancement, and basic prosperity will be achieved for every Chinese citizen by then. Externally, China will regain its position as a "global leader" and  "become a proud member of the community of nations."

This blueprint is a further elaboration of Xi's pet phrases "Chinese dream" and the "great revival of the Chinese race." And the time frame is in line with his attachment to the "Two Centennials" -- namely, the hundred-year marks from the establishment of the party in 1921 and the founding of the People's Republic of China in 1949. Enhancing the sense of historic mission to regain a rightful position in the world after the "century of humiliation" after the 1840s defeat by the British in the Opium War is a powerful narrative in the country and a prime source of legitimacy for Communist rule.

On modernization of the military:

"We will adapt to the trend of a new global military revolution and to national security needs. We will upgrade our military capabilities and see that, by the year 2020, mechanization will have basically been achieved, the application of IT will have markedly progressed, and strategic capabilities will have greatly improved. .... We will make it our mission to see that by 2035, the modernization of our national defense and our forces will have been basically completed, and that by the mid-21st century our people's arms forces will have been fully transformed into world-class forces."

"Political power grows out of the barrel of a gun," Mao Zedong famously said, and the People's Liberation Army is still the military arm of the party. As China's economic and political clout grows, its military muscle is bulking up as well. The PLA plays a central role in attaining Xi's ambition of China becoming a "great modern socialist country" by the middle of this century.

But tensions with neighbors -- including disputes with Southeast Asian nations and Japan over territorial issues -- have been growing while friction between Beijing and Washington has been exacerbated by a series of trade issues. Regional stakeholders are feeling increasingly jittery over China's hefty security spending and frequent exercise of military might in disputed waters.

"China remains firm in pursuing an independent foreign policy of peace. ... No one should expect China to [accept] anything that undermines its interests. China pursues a national defense policy that is by nature defensive. China's development does not pose a threat to any other country. No matter what stage of development it reaches, China will never seek hegemony or engage in expansion."

While Xi appeared to adopt a softer tone on foreign policy, recent skirmishes with India on their borders have made other countries wary of Beijing's confrontational approach to disputes with its neighbors. Its efforts to expand its economic influence in Central Asia, Africa and even Europe have also alarmed other powers.

At a time when some are pointing fingers at China for failing to rein in North Korea, which has been carrying out nuclear and missile tests, Xi seems to want to avoid fueling the perception that Beijing is still supporting Pyongyang.

On Hong Kong, Macau and Taiwan:

"We must uphold the principles of peaceful reunification and 'one country, two systems,' work for the peaceful development of cross-Straits relations, and advance the process of peaceful unification of China. ... Blood is thicker than water. People on both sides of the Taiwan Straits are brothers and sisters. We share the bond of kinship. Guided by the conviction that we are all of the same family, we respect the current social system and way of life in Taiwan. ... We have the resolve, the confidence and the ability to defeat separatist attempts for Taiwan independence in any form."

Ever since Hong Kong's pro-democracy "Umbrella Movement" in 2014, Xi has been eroding various freedoms granted to the territory under the framework of "one country, two systems." Even though Hong Kong was supposedly guaranteed autonomy -- with the exceptions of foreign policy and defense -- in a treaty with the U.K. and enshrined in the territory's Basic Law, Xi has been claiming that Beijing has "overall jurisdiction."

Xi followed up by reiterating his commitment to the policy of "Hong Kong people governing Hong Kong" in the latter part of his speech, but added the condition of "patriots playing principal roles," something his predecessor Hu Jintao did not spell out five years ago.

"Patriots" means the pro-Beijing camp in Hong Kong. Xi seems to have made it clear that he is not tolerating anyone who is against Beijing, as he stipulates "full unification" of the two former European colonies to be "essential to realizing national rejuvenation." This is also part of his "Chinese dream" and what he terms the "great revival of the Chinese as a race."

While Xi still sounded tough on anti-China elements in democratic Taiwan, he also seemed to have indicated flexibility by repeating earlier promises of a high degree of autonomy, despite critics noting that Beijing has never made good on its pledges to Hong Kong and Macau.