How the Politburo Standing Committee members reached the top The Chinese Communist Party's Politburo Standing Committee may be referred to as the "China Seven," but these days power is increasingly concentrated in the hands of one man: President Xi Jinping.

The latest sign of this came in a party communique that omitted the words "collective leadership."

Nevertheless, here is the top decision-making body's new lineup, in order of rank:

1) Xi Jinping: A leader forged by a painful past Xi Jinping, the man with the power   © Kyodo

When President Xi Jinping took charge of the party as general secretary five years ago, he was billed as a "cooperative type with few enemies." The story of the 64-year-old's life may explain why.

"Nothing goes well alone," his father, Xi Zhongxun, lamented after a power struggle that saw him purged as vice premier. Xi's mother also demanded that he conduct himself with care.

Yet emotions raged within the young Xi. Like many other "sent-down youth," he was dispatched to work in a poor village. He was treated badly in the Shaanxi Province village because of his father's ouster when Xi was just 15. But Xi's resolve was unbroken.

"Power is fleeting," he said. "I saw the harshness of the world and the cruelty of politics."

These would become lessons heeded throughout a three-decade-plus career in the provinces and beyond.

After taking office as general secretary, Xi purged his own political enemies through an anti-corruption campaign and replaced them with longtime subordinates. Behind the heavy-handed tactics lay memories of his father's struggle.

A prominent theme in many Xi speeches is that one-party Communist rule is the only way to stably govern China. He is believed to have written the addition to the party's charter that all activities will be led by the party. Under his leadership, the government has stepped up restrictions on the internet and human rights activists.

Yet Xi also values the people's perspective. The popular campaign against corruption is a textbook example. Even his "Chinese Dream" of national renewal is an "expression that is easy for the people to accept," he has said.

Xi was born in Beijing in 1953, and his family hails from Shaanxi.

Originally from Anhui Province, Li Keqiang graduated from the prestigious Peking University before making his way into the fast track of the Communist Youth League.

Li rose to the position of first secretary of the body, having worked under then-President Hu Jintao during his time in the role. Li was often referred to as Hu's direct heir.

After leaving the Youth League, Li served as party chief of Henan and Liaoning provinces. Along with Xi Jinping, he was made a member of the Politburo Standing Committee while in his 50s at the 2007 party congress. Li replaced Wen Jiabao as premier in 2013.

Li's market-focused economic policies, dubbed Likonomics, have been widely praised, but he has gradually been overshadowed by Xi.

Li also has close relationships with a number of Japanese politicians, including Liberal Party President Ichiro Ozawa. Li stayed at Ozawa's home in Iwate while visiting Japan as part of a Japan-China exchange program in the early 1990s.

Li Zhanshu travels with President Xi as his closest aide on foreign visits and domestic tours. The 67-year-old Li has served as Xi's chief of staff for the past five years, working behind the scenes on important initiatives, including the no-holds-barred anti-graft campaign and the push to set Xi up as the Communist Party's "core" leader.

Li in the 1980s was party chief of Hebei Province's Wuji County, next to Zhengding County, where Xi was serving as party chief. The two, close in age, opened up to each other.

Residents of Wuji County still reminisce about Li's days there and how he played a leading role in improving roads and inviting factories. He started his career in his hometown, Hebei, and spent four decades working in smaller municipalities. Just like Xi, Li has been party chief at the municipal, county and provincial levels.

Li is known for his loyalty; he once sent a fur cap to a friend from his hometown and continued to hand-write letters to friends even after his numerous promotions. He was named in honor of a letter sent by his uncle, who died at a young age during China's Civil War.

While serving as a top official in Guangdong, China's largest province in terms of economic activity, Wang Yang advocated "replacing birds in a cage." This referred to the need to upgrade local industries and reform their structure.

Wang assumed the post of mayor of Tongling, Anhui Province, when he was still in his mid-30s. During his time in that position, he pushed ahead with bold reforms of the local government and state-owned enterprises.

Around that time, Wang published an article in a local newspaper titled, "Wake up, Tongling!" It caught the attention of then paramount leader Deng Xiaoping, who met with Wang during his famous southern tour in 1992.

Wang won reformist credentials under the "reform and opening-up" policy introduced by Deng in the late 1970s.

Born to a poor family in Anhui, Wang graduated from a middle school, then worked at a food product factory. He has supported President Xi Jinping as a vice premier in charge of external economic affairs, accompanying the president on many of his overseas trips.

Wang is known for his cheerful disposition and frequent jokes. He devours history, economic and science books when time permits, and likes to recommend books to his subordinates. At the first meeting he convened as Guangdong's top official, he read from a book about Deng's southern tour.

Wang Huning is one of China's top thinkers on both domestic and foreign affairs, having served under every party chief since Jiang Zemin.

Tough on corruption, Wang has Xi's unflagging trust and accompanies him on nearly every foreign trip. His ideas that authority must be concentrated at the top to promote reform form the backbone of Xi's political ideology.

Although Wang's family is from Shandong Province, he was born in Shanghai in 1955. He began to make his mark in 1985 when he became an associate professor at prestigious Fudan University at age 30. Wang is fluent in French and has studied in the U.S.

He does not hesitate to speak up even to those in higher positions. Known for his quick temper, he gave up on studying in Japan when he was asked to provide a detailed list of his prior schooling.

Zhao Leji spent his adolescent years in Qinghai Province, but his family is originally from Shaanxi Province, the ancestral home of Xi Jinping. Zhao even speaks with a Shaanxi accent, and some accounts claim that his father was a friend of Xi's.

Zhao went on to study philosophy at Peking University. Later he returned to Qinghai where he established his career and, at 42, became China's youngest provincial governor in 2000.

In 2007 he became party chief of Shaanxi, where he was called "the people's secretary" for his frequent visits to impoverished areas.

Although not a well-known figure in the party's center at the time, Zhao in 2012 was chosen to head its organizational department, where he helped promote Xi supporters to top positions in important areas like Beijing and Chongqing.

Zhao became a close aide to Xi while helping build the foundation of the Chinese leader's first term in office. When former Chongqing party chief Sun Zhengcai was brought down in July on corruption charges, it was Zhao who made the trip to explain the situation to local officials.

7) Han Zheng: Once a Jiang associate, now a Xi loyalist Han Zheng, 63, has been serving as the secretary of Shanghai since November 2012. While other Communist Party senior members typically gain experience in posts in a number of municipalities, Han's political background is rather unique, as he has dedicated his 40-year career solely to Shanghai.

After then Shanghai Secretary Chen Liangyu was forced out in 2006 for taking bribes and abusing power, Xi Jinping took the position. Han, as the city's mayor at that time, helped Xi settle the confusion. This led Han to be named to his current position, which is the highest in Shanghai and is usually assumed to be a shortcut to the party's top positions.

Born in a city in Zhejiang Province, he worked in a factory doing inventory management and other tasks in his 20s, while studying at a college in the evenings. He graduated from the college in his early 30s.

Han used to be a close associate of former President Jiang Zemin, who once led the Shanghai Bang, one of unofficial factions within the Communist Party. But as Jiang's influence diminished, Han approached Xi.

He is well-regarded for his balanced leadership style. 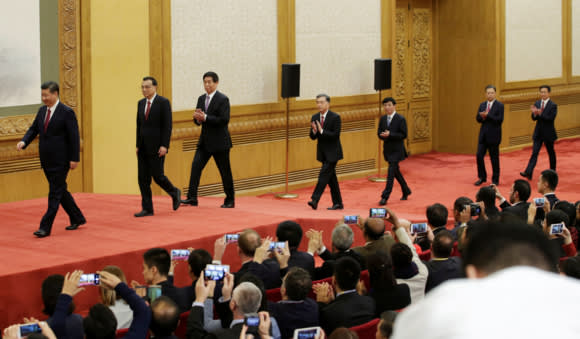