BANGKOK -- The leaders of the Association of Southeast Asian Nations met in Jakarta on April 24 to grapple with the aftermath of the coup in Myanmar. After the meeting, Brunei issued a chairman's statement, saying the leaders had reached "consensus" on such matters as an immediate cessation of violence in Myanmar, the sending of the ASEAN chairman's special envoy and the start of constructive dialogue among all parties concerned to seek a peaceful solution in the interests of the people.

The leaders meeting was extraordinary in every way.

ASEAN has a policy of noninterference in the domestic affairs of other members. This was the first time for the group to convene leaders' gathering over an internal issue in a member nation. It was also the first to be held in a country other than that of the chairman. Meetings of the bloc, which happen nearly 1,000 times a year, have been held online since the COVID-19 pandemic began. This was the first face-to-face ministerial meeting since a foreign ministers meeting with China in Laos in February last year.

It was also surprising that Myanmar junta leader Min Aung Hlaing was present. It is understood that he attended as a head of the State Administration Council, the official name of junta that seized power after the Feb. 1 coup, not as a senior general of the Myanmar military. But during the previous military government, the prime minister attended the summits, not Than Shwe, then-chairman of the State Peace and Development Council. If normal diplomatic protocol had been followed this time, it would have been appropriate for Myanmar to send former Vice President Myint Swe, who was appointed acting president by the junta.

The decision to invite Min Aung Hlaing drew the ire of critics, who said the move amounted to granting tacit approval to the junta. But ASEAN called the recent confab a "leaders' meeting," rather than a summit, to indicate that it does not recognize Min Aung Hlaing as Myanmar's head of state, according to diplomatic sources. The head of Mynmar's junta, Senior Gen. Min Aung Hlaing, left, gestures as he is welcomed at Soekarno Hatta International airport on the outskirts of Jakarta on April 24.   © Reuters

The unusual gathering was held to urge Myanmar's military chief to end the violent crackdown on pro-democracy protesters, which has already killed more than 750 civilians, according to the Assistance Association for Political Prisoners, a pressure group. ASEAN faced strong pressure from the international community over the meeting, and discussions must have been heated, unlike the usual carefully choreographed ASEAN summits.

After the coup, Indonesia set up an online meeting of ASEAN foreign ministers on March 2. Members appealed to Wunna Maung Lwin, the junta-appointed foreign minister of Myanmar, for restraint, but instead the junta's crackdown escalated.

Then Indonesia moved again. On March 19, President Joko Widodo called on Brunei's Sultan Hassanal Bolkiah to convene a leaders meeting, and Malaysian Prime Minister Muhyiddin Yassin and his Singaporean counterpart, Lee Hsien Loong, quickly voiced their support. The meeting would not have taken place without the backing of these three countries.

It is thought Indonesia's activism was driven by the situation in Myanmar when the ASEAN foreign ministers' meeting was held in March, and it may have been the case for the latest gathering as well. Just before a telephone conference with Sultan Bolkiah, Jokowi posted a video on YouTube saying that he would propose a leaders' meeting in Brunei. The message was that the Indonesian president intended to play a leading role in solving the Myanmar crisis.

The persecution of Rohingya Muslims in Myanmar has been a concern for Indonesians, 90% of whom are Muslims. "Being a leader with excellent political balance, Jokowi thought it would be beneficial for him to be involved in Myanmar, given the state of domestic public opinion and Indonesia's status as a leader of ASEAN," said Takashi Shiraishi, chancellor of the Prefectural University of Kumamoto.

Malaysia, where Islam is the official religion, and Singapore, which emphasizes multiracial unity and has the biggest economic interest in Myanmar, had similar political interests in tamping down the unrest in Myanmar.

These three countries were actively involved in Myanmar for 10 years until Myanmar joined ASEAN in 1997 and their attitude toward the country has remained the same.

Europe and the U.S. in the past strongly condemned Myanmar's previous junta, which in 1988 placed pro-democracy leader and later Myanmar's de facto leader Aung San Suu Kyi under house arrest after smashing pro-democracy demonstrations. The junta also ignored Suu Kyi camp's landslide victory in the 1990 general election. But the three ASEAN members, among others, defended Myanmar.

The trio faced their own challenges at the time. They had adopted "developmental dictatorships" that prioritized economic growth over political freedom. And they advocated "Asian-style democracy," which places more emphasis on social stability than individual liberty. As kindred governments, they sought to help Myanmar to fend off criticism over censorship and crackdowns on democratic opponents.

However, the three also pursued "constructive engagement," urging the junta to release Suu Kyi from her first house arrest in 1995, when talks with Myanmar over ASEAN membership were in the final stage.

This time, the three nations sought concessions from Myanmar, rather than defending it, probably due to changes at home. Indonesia became democratic after the Asian financial crisis and Suharto's authoritarian regime collapsed in 1998. Malaysia experienced its first democratic change of government in 2018, while in Singapore, which has been led by the ruling People's Action Party since its independence, the opposition has become more of a political force in recent years. 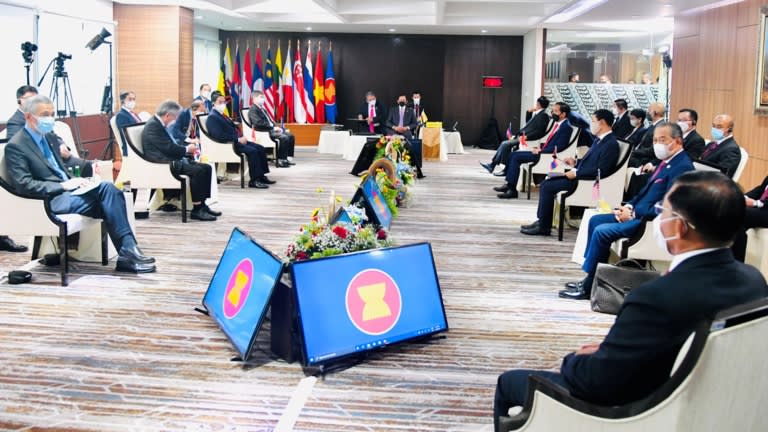 Leaders of the 10-member Association of Southeast Asian Nations meet at the organization's secretariat building in Jakarta on April 24.   © Reuters

The shift in attitudes toward Myanmar's junta reflects progress toward democratization in the three countries, which have grown more sensitive to public opinion.

But the opposite trend is visible in Thailand and the Philippines, which only sent foreign ministers to the latest meeting. The Philippines and Thailand, which went democratic in 1986 and in 1988, respectively, took a cool attitude toward Myanmar's junta at the time. But both countries are now reluctant to take a stand on Myanmar being ruled by strongmen themselves.

Thailand's Prime Minister Prayuth Chan-ocha, who masterminded the 2014 coup that brought him to power, and Philippine President Rodrigo Duterte, whose extralegal killings of those accused of drug-related crimes, are facing pressure in Europe and the U.S.

It looks as if the ASEAN leaders meeting may win some concessions from Myanmar's junta, but it remains unclear whether the generals will keep their word. Singapore's prime minister said that Myanmar did not reject the dispatch of a special envoy, but Min Aung Hlaing may have shrugged off the proposal, rather than accepting it. It is also unclear when and how the junta will implement the agreement.

If Myanmar fails to hold up its end of the bargain, and ASEAN does nothing about it, confidence in ASEAN, both at home and overseas, could plummet. In the 1990s, the prospect of admission to ASEAN was a bargaining chip that the group held to persuade the previous junta to moderate its behavior. Is the group really prepared to consider expelling Myanmar this time? The extraordinary recent meeting may shed light on whether ASEAN is ready to take that momentous step.