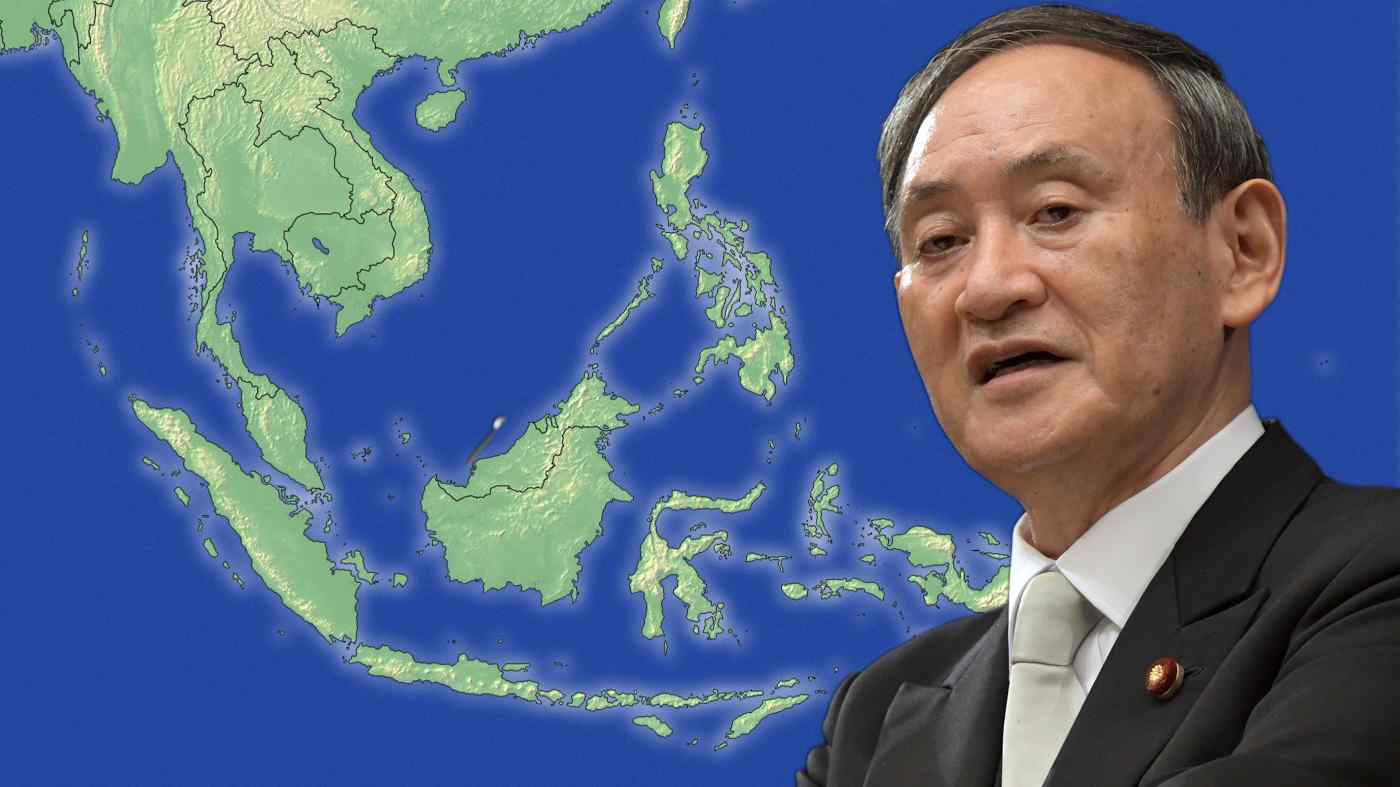 To read the outlook for Suga's diplomacy, it is necessary to understand the evolution of this concept that he has pledged to carry on. It is the product of great pains to taken to deal with both the U.S. and China under his predecessor Shinzo Abe.

Asia was in a turbulent period of change when Abe returned to the post of prime minister in late 2012.

In April of that year, China took effective control of the Scarborough Shoal in the South China Sea after a nearly monthlong standoff between Chinese and Philippine armed forces.

In September, the government of Abe's predecessor Yoshihiko Noda nationalized three of the Japanese-administered Senkaku Islands in the East China Sea. This provoked fierce anti-Japanese protests across China, which claims the islets as the Diaoyu Islands.

In November, Xi Jinping took the helm of the Chinese Communist Party, marking the country's first leadership change in 10 years.

Japan's interest in the Association of Southeast Asian Nations was at a low ebb. Countries in the region had griped that Japanese foreign ministers had not visited for years, a diplomatic source recalled.

"But Japan suddenly turned its attention to cooperation with ASEAN after the re-realization that the bloc has problems in the South China Sea that are similar to the Senkakus situation," this person said.

Against this backdrop, it was perhaps inevitable that Abe chose Vietnam, Thailand and Indonesia for his first official trip abroad in January 2013. The tour put Japan in step with the U.S. Then-President Barack Obama visited Thailand and Myanmar in November 2012 as his first overseas trip following reelection. 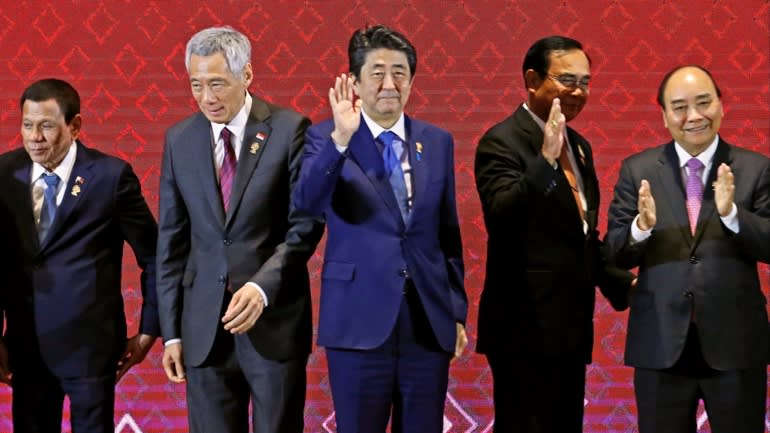 Shinzo Abe and the leaders of the Philippines, Singapore, Thailand and Vietnam in November 2019. As Japan and the U.S. began giving the cold shoulder to Thailand after a 2006 coup, China began warming up to Southeast Asia.   © Reuters

The nearly back-to-back visits to Thailand by the Japanese and U.S. leaders were no coincidence.

Both Japan and the U.S. had grown distant from Thailand since the Thai army had toppled the elected government of Prime Minister Thaksin Shinawatra in a 2006 coup. Nevertheless, Thailand was a U.S. ally and a close economic partner of Japan owing to the presence of many Japanese companies there.

In ASEAN, where decisions are made by consensus, China-leaning Cambodia was shaking the bloc's unity as a check against Chinese expansion in the South China Sea. To counter Beijing, Japan and the U.S., in cooperation with Australia, tried to bring Thailand to their side.

But the attempt ended in vain. Thailand's political unrest over the question of pardoning Thaksin, who went into self-imposed exile to avoid a corruption trial, was followed by another coup in May 2014 to oust Thaksin's sister, Yingluck Shinawatra. The U.S. stepped up its criticism of Thailand, which only drove Bangkok closer to China.

Meanwhile, China was steadily expanding its influence in Southeast Asia. Xi and Premier Li Keqiang visited five ASEAN member states in a separate but coordinated manner in the fall of 2013. When Xi visited Indonesia as part of his debut tour, he declared that China would take the lead in infrastructure building in Asia with his Belt and Road initiative. The project signaled that China's presence would expand westward from the Pacific Rim. 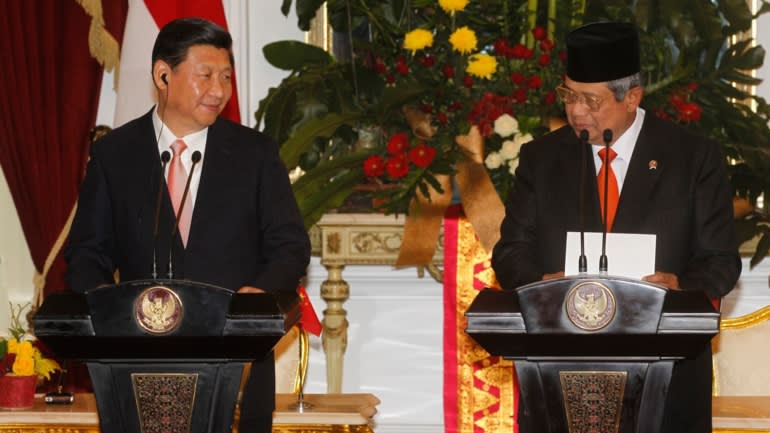 Japan turned to India as a new partner to replace Thailand. At the Tokyo International Conference on African Development in August 2016, Abe proposed the "free and open Indo-Pacific" concept of cooperation among countries along the Pacific and Indian oceans to promote economic ties and democracy.

During his first term as prime minister, Abe stressed the importance of this region in his "Confluence of the Two Seas" speech to the Indian parliament in 2007. The "free and open Indo-Pacific" contains this initial vision in a more developed form, and it represents a shift from conventional geopolitical thinking centered on an "Asia-Pacific" region.

U.S. President Donald Trump, who took office in 2017, had only a vague Asia strategy at the start of his administration. In essence, his administration hitched its wagon to Japan's idea, introducing a similar concept in conjunction with Trump's visit to Asia in November. In May 2018, Washington changed the name of U.S. Pacific Command to U.S. Indo-Pacific Command.

ASEAN reacted to this change in thinking. Indonesia, a leader in the bloc, said the Indo-Pacific concept could be traced back to 2013 speech by then-Foreign Minister Marty Natalegawa. ASEAN went on to adopt its own version of the idea in June 2019. Nations such as Britain, France and Germany have followed.

The Indo-Pacific concept is now becoming a global standard when it comes to discussing Asia. This development could very well be called the biggest legacy of Abe's diplomacy.

Even as the Abe government advanced cooperation with the U.S., Australia and India in diplomacy and security, it also sought to improve Japan's relations with China from the rock-bottom state in which he found them.

When Li visited Japan in May 2018, Abe agreed to cooperate with China on infrastructure projects in third countries. Abe's visit to China in October of the same year brought along about 500 business leaders and resulted in the conclusion of 52 memorandums on cooperation.

The upshot of this is that the two countries worked out a framework for to Japan to support the Belt and Road initiative. This reflected the Abe government's desire to protect Japan's economic interests in Asia through cooperation, rather than confrontation, with China.

How sustainable is such a diplomatic strategy of being everybody's friend? Not only are the U.S. and China locked into an escalating new Cold War, but Australia's and India's relations with Beijing have also suffered a shocking deterioration. China has imposed economic restrictions on Australia in retaliation for a call to investigate the origin of the new coronavirus. India, meanwhile, has hit China with economic repercussions after a military clash along their disputed border.

"Much like the postwar Pax Americana, the Cold War and 'Japan as Number One' faded into the past one after another, global hegemony is a transient thing," a diplomatic source said. "You have to take actions that anticipate what happens 10 years ahead."

While the world watches America's decline and China's rise, the Suga government needs to see past these trends as it plans Japan's foreign policy in Asia. This will likely entail strategic decisions that go beyond simply taking up Abe's mantle.