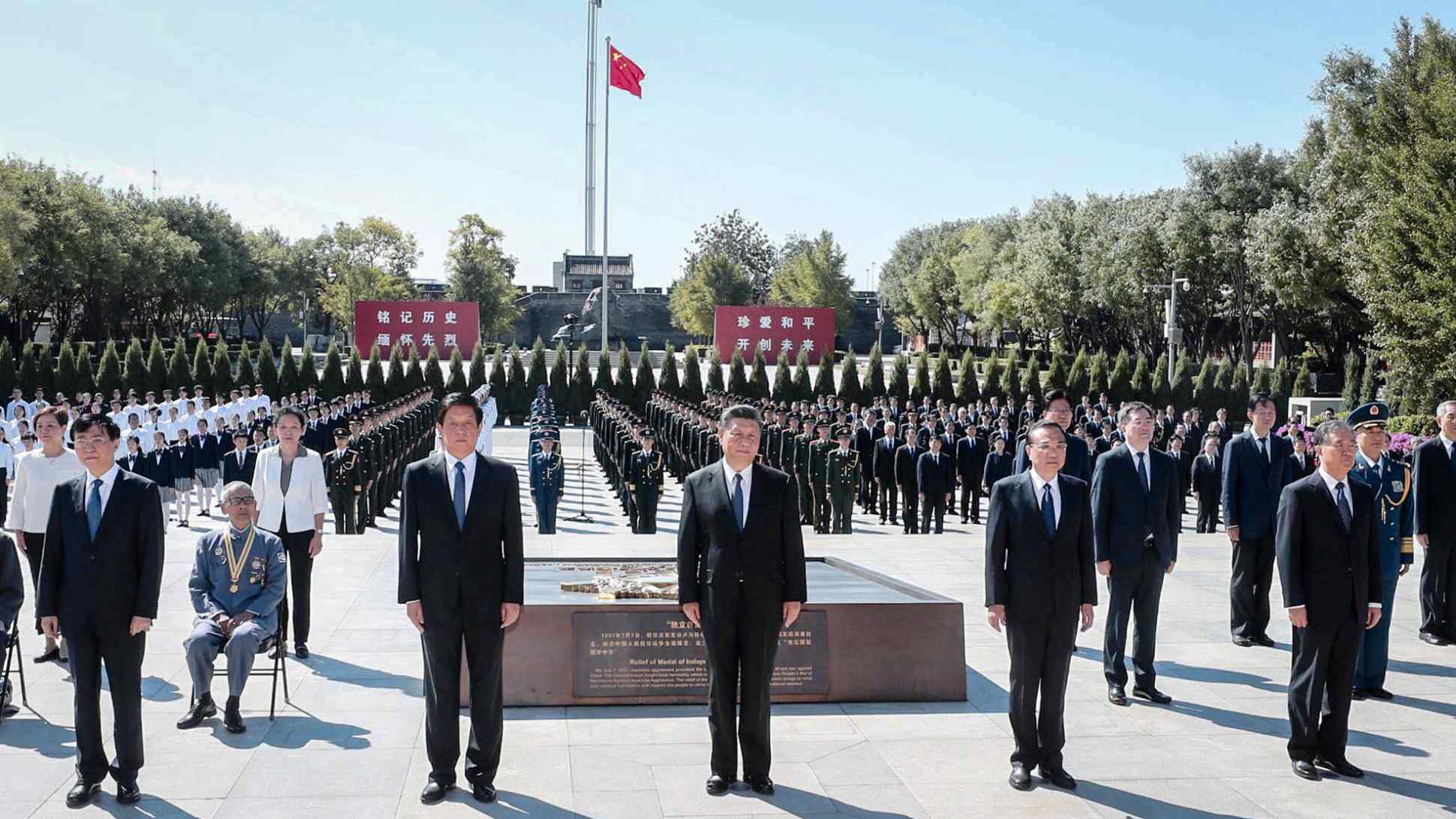 Chinese President Xi Jinping, front center, last week took aim at the U.S. while commemorating the 75th anniversary of the victory of the Chinese People's War of Resistance Against Japanese Aggression.   © Xinhua/Kyodo
China up close

Analysis: Five things Xi pledged never to allow the US to do

TOKYO -- For China, this year's Sept. 3 was supposed to be a historic milestone, commemorating the 75th anniversary of its victory in the "war of resistance against Japanese aggression" and the "anti-fascist war."

Yet, the scathing criticism was not aimed at Japan. Anti-Japanese rhetoric was largely replaced by anti-American discourse.

President Xi Jinping appeared at a symposium commemorating the anniversary at the Great Hall of the People in Beijing. As his speech proceeded, he stepped up his bluster against the Trump administration, listing five rejections.

Each sentence stated, "The Chinese people will never allow ...

"attempts by anyone or any forces to distort the history of the CPC [Chinese Communist Party] and vilify its nature and mission."

"attempts by anyone or any forces to distort and change the path of socialism with Chinese characteristics, deny and vilify the great achievements of the Chinese people in building socialism."

"attempts by anyone or any forces to separate the CPC from the Chinese people and set them against each other."

"attempts by anyone or any forces to impose their will on China, change its direction of development, and obstruct Chinese people's efforts in building a better life for themselves."

"attempts by anyone or any forces to jeopardize their peaceful life and right to development, obstruct their exchanges and cooperation with other peoples, or undermine the noble cause of peace and development for humanity." 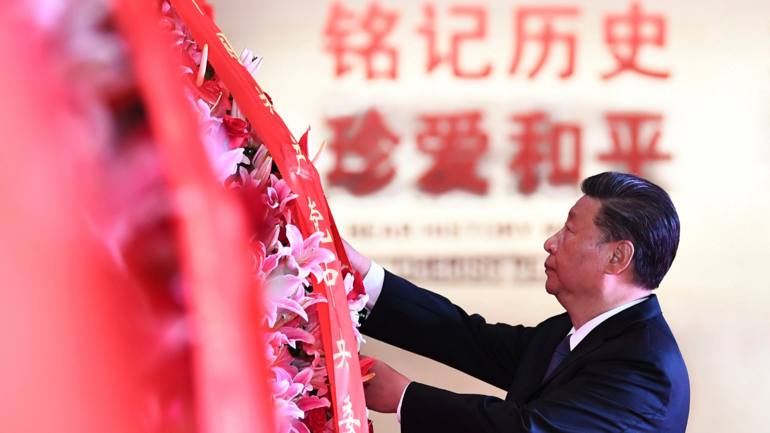 Chinese President Xi Jinping straightens the ribbons on a flower basket at the Museum of the War of Chinese People's Resistance Against Japanese Aggression in Beijing on Sept. 3, the same day he delivered a broadside against the U.S.   © Xinhua/AP

Particularly important is the third one, an Asian scholar studying U.S.-China and Sino-Japanese relations said. Having the U.S. drive a wedge between the party and the people is most disturbing for China.

With no fair and democratic elections, the premise of Chinese-style rule is that the party represents all the interests of the Chinese people.

If the U.S., the world's biggest military and economic power, were serious about treating the Chinese Communist Party and the Chinese people separately, it would be no small matter for Beijing.

In his address, Xi also referred to the need for Japan to reflect deeply on its history of militarism and aggression. But he attached greater importance to maintaining peaceful and friendly relations between the two countries over the long term.

Xi's style of delivery was also uncustomary. Instead of reading from a prompter, a seated Xi read out a prepared text while looking down at the table. Each time he declared that "the Chinese people will never allow," he paused, as if waiting for applause.

Before the symposium, a flower-laying ceremony was held on Sept. 3 at the Museum of the War of Chinese People's Resistance Against Japanese Aggression, near the Marco Polo Bridge in suburban Beijing.

Despite the appearance of Vice President Wang Qishan, the first such sighting in several months, major Chinese media outlets treated the ceremony as only the second most important news of the day. It was clear that the main theme of the day was not "anti-Japan."

Xi's speech was also notable because "it was the first time that China's top leader himself squarely hit back at the Trump administration, " a party source said.

It was, in effect, a counterpunch to a speech U.S. Secretary of State Mike Pompeo made on July 23 in California, where he unveiled a policy of targeting the Chinese Communist Party while separating it from ordinary Chinese people.

Details of that fiery speech initially were not carried in China. More than a month on, though, they are widely known.

To counter the Trump administration's narrative, China needs the support of friends. That is why the country's top two diplomats, Politburo member Yang Jiechi and Foreign Minister Wang Yi, embarked on separate tours of Europe.

Strengthening ties with Europe, with a big focus on economic benefits, will allow China to block the U.S. from forming an international coalition against Beijing, Chinese leaders thought.

Yang and Wang had one more important mission in Europe. To have partners reiterate the "one China" policy regarding Taiwan.

A Czech delegation led by Senate speaker Milos Vystrcil was making a six-day visit to Taiwan at the time, although the Czech Republic and Taiwan have no diplomatic ties. Meanwhile, the U.S. has moved recently to strengthen its ties with Taiwan.

China thus is becoming increasingly alarmed by the possibility that its "one China" policy -- in which Taiwan is part of the one entity called China -- is becoming a mere facade.

In Europe, however, China's efforts to silence Taiwan and its supporters backfired.

When Wang said the Czech speaker will "pay a heavy price" for visiting Taiwan, German Foreign Minister Heiko Maas, who was standing next to Wang at a Sept. 1 news conference, objected, saying, "Threats don't fit in here."

Germany and France are also critical of the Hong Kong national security law, which China put into force at the end of June. During his meeting with Wang in Paris, French President Emmanuel Macron expressed "strong concerns" about the situation in Hong Kong and human rights in Xinjiang.

Macron told reporters that France was not excluding any companies from its next-generation 5G mobile market, including China's telecom equipment giant Huawei, but that his strategy was one based on European sovereignty.

China is facing an uphill battle in its desperate efforts to retain Europe.

Among the participants in the symposium on Sept. 3 were officials from the Political Work Department of the Central Military Commission. The department is in charge of politics within the military. It was a symbol that, going forward, it will not be only the "wolf warrior" diplomats of the Foreign Ministry but an "all China" team on the counterattack against the U.S.

But mystery remains. Why did Xi choose the 75th anniversary of China's war of resistance against Japan to launch a counterattack against the U.S.?

A sign of this came from Chinese Foreign Ministry spokesperson Hua took, who took to Twitter to give Abe high marks for working to better Sino-Japanese relations.

"We appreciate PM Shinzo Abe's efforts to improve China-Japan relations," she wrote in English and Japanese. "We wish him a speedy recovery and good health."

Interestingly, the official Chinese translation of the tweet has her expressing "thanks" to Abe, rather than "appreciation." The contrast with China's stance toward the U.S. was stark.

With an eye on a fierce, prolonged confrontation with the U.S., the Xi administration wants to win Japan over to its side as much as possible. For Chinese diplomacy, it has become even more important to leave open the possibility of realizing Xi's postponed official visit to Japan. Xi's official Japan visit was originally scheduled for April, but it was put off due to the coronavirus outbreak.

As Japan gets set to choose Abe's successor, most likely Chief Cabinet Secretary Yoshihide Suga, it is not in China's best interest to provoke Japanese public opinion at such a politically sensitive time.

China could have easily been engulfed in anti-Japan sentiment if the 75th anniversary had triggered "Japan bashing." But that would have been the worst-case scenario in terms of strategy.

Beijing is now carefully analyzing and calculating the chips on the table as the U.S. and Japan both choose their leaders for the coming years. Ideally, there could be an opportunity to drive a wedge between Japan and the U.S.

A closer look at Xi's speech reveals that despite the bellicose tone, he carefully avoided mentioning Trump by name.

Think of it as a slight hedge so matters can still be smoothed over if the U.S. president wins re-election in November.