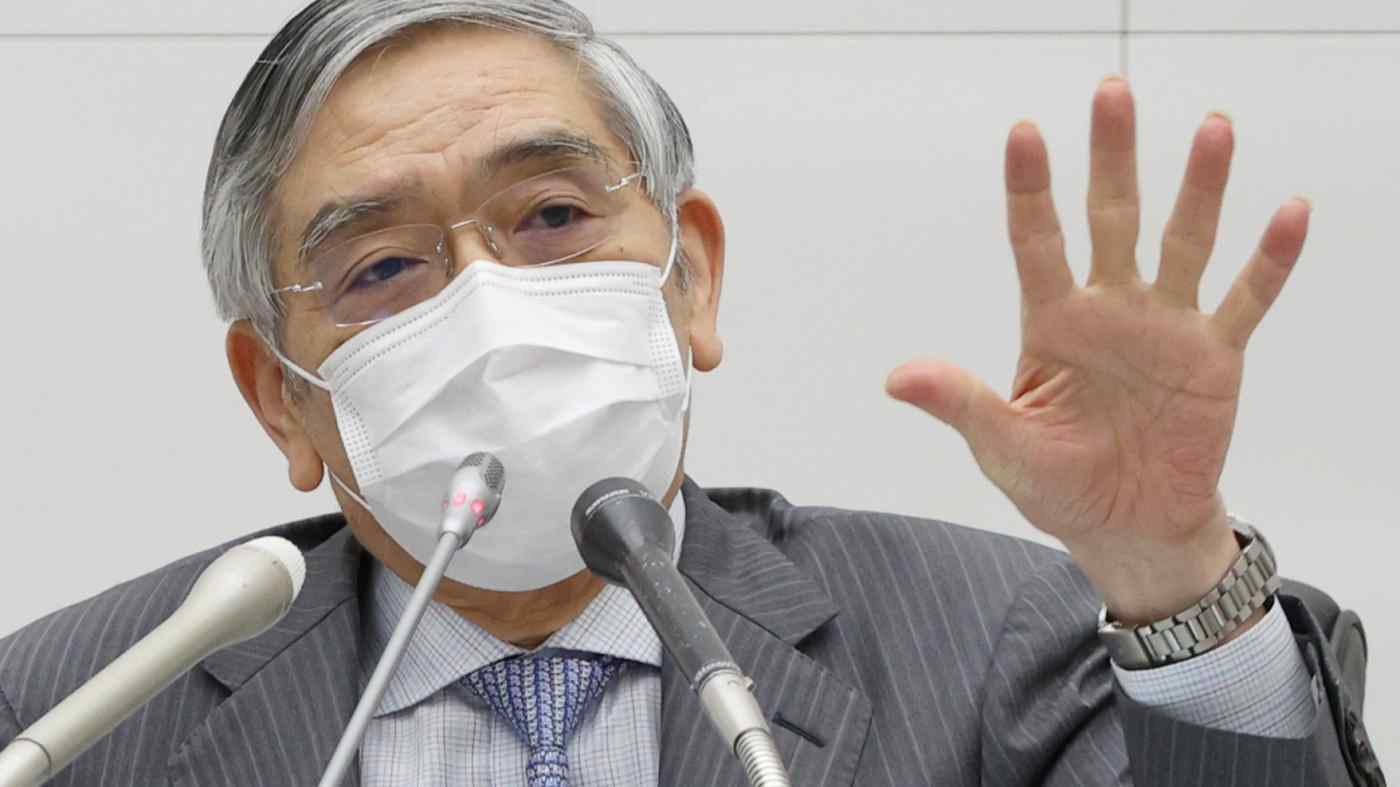 TOKYO -- Financial market participants have paid keen attention to a recent remark by Bank of Japan Gov. Haruhiko Kuroda suggesting that the central bank will continue its negative interest rate policy after 2023.

Answering a question at a news conference on June 16 about whether it will be difficult for the BOJ to increase interest rates before the U.S. Federal Reserve, Kuroda said, "I don't think the BOJ will be anywhere near raising interest rates in fiscal 2021 or 2022."

The question was raised because the Fed indicated on June 10 that interest rates will remain close to zero until at least the end of 2022 to address the economic turmoil caused by the coronavirus pandemic.

The question and answer reminded me of the history of the BOJ bound by U.S. economic trends and the Fed's policy and losing its policy leeway. If the history is repeated, the BOJ could continue to face the difficulty of raising rates in and after 2023 when the Fed may start rate hikes. In addition, the BOJ may find it difficult to end the negative rate policy even after Kuroda's successor takes office in April 2023.

Over the past 25 years, there were two phases in which the BOJ raised rates -- August 2000 when it ended its zero rate policy and from July 2006 until February 2007 during which it lifted the policy for the second time and then increased its policy rate.

The word "phase" may not be appropriate for the first hike because no increase followed. In both cases, however, the BOJ raised rates after the completion of the Fed's rate hike phase as seen in the chart below. The BOJ raised rates long after the Fed possibly because of the Japanese economy's reliance on exports to the U.S. market. In other words, the BOJ could not raise rates before a strong upturn in the U.S. economy as, otherwise, Japan could not expect its economy and price trends to improve. In addition, the BOJ probably wanted to avoid the risk of upward pressure on the yen from higher rates.

It was therefore reasonable for Kuroda to deny the possibility of rate hikes by the BOJ before the Fed begins to increase rates.

It is also questionable whether the BOJ can raise rates soon after the Fed starts the move in or after 2023. As mentioned above, the BOJ could increase rates after the completion of the Fed's hiking phase. The BOJ will find it difficult to increase rates unless rates are considerably hiked in the U.S. and the risk of the yen's appreciation is significantly reduced. The central bank therefore could continue the negative rate policy on a long-term basis.

A U.S. shift to monetary relaxation will also make it difficult for the BOJ to raise rates as it will increase buying pressure on the yen. As shown by the chart, Japan's phase of rate hikes has become short-lived, ending before the Fed begins easing credit.

The BOJ's actions in 2000 and between 2006 and 2007 were better than nothing. In the latest phase of rate hikes in the U.S. from December 2015 until December 2018, the BOJ could not move even after the Fed put the phase to rest. The BOJ could merely adopt a more flexible approach in July 2018 to Japanese Government Bond purchases aimed at keeping 10-year JGB yields at around zero, allowing them to move upward and downward within a wider range. U.S. Federal Reserve Chairman Jerome Powell speaks to reporters in March. The Fed indicated on June 10 that interest rates will remain close to zero until at least the end of 2022.   © Reuters

The decision was seen as paving the way for rate hikes by the BOJ. But before it took effect, the Fed decided to cut rates in July 2019 in the wake of a global economic slowdown caused by, among others, the escalation of the U.S.-China trade war.

With the economic harm of the COVID-19 pandemic spreading, the Fed has returned to the policy of keeping rates near zero. There is even word circulating that the Fed may opt for a negative rate policy. Policy leeway is further narrowing for Japanese monetary authorities concerned about the risk of the yen's appreciation.

The BOJ with Kuroda's successor at the helm after the spring of 2023 may manage the 2% annual inflation target in a flexible manner one way or another and devise a way to smooth rate hikes.

But there will be no major changes in the state of Japan's monetary policy under the bind of economic conditions and policy of the U.S. as well as foreign exchange rates. Room for the BOJ's flexible moves may not expand greatly.

There is no denying that the U.S. will be unable to start raising rates in 2023 as a result of the prolonged the pandemic. If the BOJ continues the policy of keeping short- and long-term rates at razor-thin levels, adverse effects, such as those on financial institutions' earnings, may well become more acute.