Backlash builds against China as Belt and Road ties fray Traffic enforcers remove an anti-China banner from an overpass in Metro Manila on July 12.   © Reuters

TOKYO -- With China suffering setbacks in its Belt and Road infrastructure initiative, Southeast Asian countries are starting to fight the pull of the emerging Chinese-led regional order.

Philippine President Rodrigo Duterte's recent change of heart on China was a hot topic of conversation when Asian journalists met recently in Bangkok for a media forum, hosted by the Japan Foundation Asia Center, centering on Japan and the Association of Southeast Asian Nations.

Duterte had sat squarely in the pro-Beijing camp. "I would say I need China," he said as recently as April ahead of a trip to the country. "More than anybody else at this time of our national life, I need China."

"I just simply love [President] Xi Jinping. ... He understands my problem and is willing to help, and I'd like to say, 'Thank you, China,'" he said.

Duterte had avoided criticizing Beijing over disputed territory in the South China Sea. But this changed in August, with negative remarks on three occasions in the space of 10 days.

"I hope that China would temper" its behavior in the region, lest it become a "flashpoint," he said in a speech attended by the U.S. ambassador to the Philippines and VIPs from elsewhere.

"You cannot create an island. It's man-made, and you say that the air above this artificial island is yours," he said. 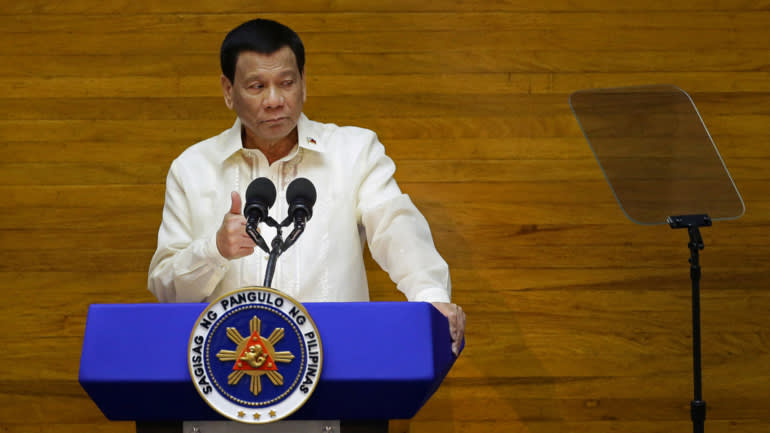 Philippine President Rodrigo Duterte delivers his State of the Nation address to the House of Representatives in Metro Manila on July 23.   © Reuters

"That is wrong because those waters are what would consider international sea. And the right of innocent passage is guaranteed," Duterte said.

China's Ministry of Foreign Affairs issued a statement objecting to Duterte's remarks, showing a rift developing between Manila and Beijing.

An international arbitral tribunal sided fully with the Philippines in 2016 on the dispute, rejecting Chinese claims to much of the South China Sea. Duterte, who came to power shortly after the ruling, largely set the issue aside in favor of forging closer ties with Beijing.

His recent about-face comes amid signs that the public is unhappy with his approach. More than 70% of respondents to a June poll said the Philippines should press its claim to the Chinese-occupied islands. Filipinos are increasingly frustrated that Manila's compromise on the issue has not been met with commensurate economic support from Beijing.

Some Southeast Asian attendees at the media forum said the Philippine public no longer supports Duterte's conciliatory posture on the issue and that with midterm elections coming up in May, the president cannot ignore public opinion.

According to a diplomatic source, Duterte has quietly told Xi that the arbitration ruling in the Philippines' favor is a card he can play against China in a pinch and that while he does not plan to use it without good reason, he will not discard it.

The shift in Manila reflects two realities. One is that even when Beijing throws its economic weight around with massive Belt and Road projects, using them to get Southeast Asian countries to take its side on security issues touching on sovereignty is no easy task.

The other is that while China has no problem putting up massive sums to support such projects, implementation is often poor or lacking in transparency, drawing host countries' ire.

This has spurred countries that have borrowed from China to take steps to resist being pulled into its economic sphere of influence -- including seemingly pro-Chinese governments in Thailand and Myanmar.

In Thailand, construction just began late last year on a Belt and Road rail project after negotiations got bogged down for years. Beijing initially proposed splitting the investment, but Bangkok ultimately decided to take sole ownership.

The government also imposed tough restrictions on Chinese engineers involved in the project, requiring those working in Thailand to pass examinations in engineering as well as Thai law and professional ethics.

Thailand is perceived to have been cozying up to China since being hit with Western sanctions after the coup that brought its military junta into power. But the reality is not so simple.

Bangkok detests the power Beijing holds over it, said an ASEAN diplomat familiar with Thailand's internal affairs. China initially wanted to extend the railway project to a port in southern Thailand, but the Thai government insisted that it run only as far as Bangkok, the source said.

Myanmar pushed China to scale back a port project for similar reasons. It also has yet to give the go-ahead on high-speed rail that would link the two countries, reportedly over concerns in Naypyitaw that Beijing might use it for military purposes.

Many countries have taken note of the fate of the Hambantota port project in Sri Lanka, part of Belt and Road. The Sri Lankan government became heavily indebted to Beijing and was forced to lease the port to the Chinese for 99 years. The Hambantota port in Sri Lanka under construction back in 2010.   © Reuters

That China often sends over the necessary labor for infrastructure projects, instead of employing locals, is another sore spot.

This growing resistance to Beijing is not necessarily a bad thing for the future of the Asia-Pacific region. As China grows in power and influence, it promotes the spread of undemocratic models like its own -- a trend to avoid.

How will the friction over Belt and Road affect Southeast Asian nations' diplomatic approach to China? The most interesting example is that of Malaysian Prime Minister Mahathir Mohamad, who scrapped a China-backed rail project after taking office in May, citing concern about excessive costs and debt to Beijing that could harm the country's finances.

Mahathir's predecessor Najib Razak, by contrast, had prioritized securing Chinese economic support. He ordered his cabinet to steer clear of comments on Malaysia's own dispute in the South China Sea that could provoke Beijing, according to an Asian diplomat.

Given Southeast Asia's immense need for capital to build infrastructure, countries are unlikely to distance themselves entirely from China. But their instinct to avoid having their hands tied politically and diplomatically, even at the cost of economic aid, should not be underestimated.