TOKYO -- U.S. President Joe Biden gently put his hand on Japanese Prime Minister Yoshihide Suga's back as the two leaders left the Rose Garden at the White House after a joint news conference in mid-April. Biden made the gesture as if to show his appreciation for Suga's visit to Washington, despite the ongoing pandemic and his Asian counterpart's relative lack of experience in foreign diplomacy.

The face-to-face meeting could firm up relations in these uncertain times and provide a greater bond than online talks might have achieved.

In 2001, Japanese Prime Minister Junichiro Koizumi made his first visit to the U.S. two months after assuming office. When presented with an autographed baseball from U.S. President George W. Bush, Koizumi tossed it back to the smiling American leader in a brief and informal game of catch. The exchange marked the start of a productive relationship.

Both Koizumi and Bush were in their 50s and had just started out as national leaders. After his U.S. visit, Koizumi led his ruling Liberal Democratic Party to a landslide victory in the upper house election, taking the first step toward his long reign as prime minister. Bush also began to envision his eight-year presidency, as their paths as political leaders followed similar trajectories.

Facing critical domestic issues in the middle of a pandemic at rather advanced ages -- Suga is 72 and Biden 78 -- both leaders must have been keenly aware that their clocks are ticking.

Biden is the oldest president to assume office in U.S. history and he may not be up for a second term. For him and the Democratic Party, the worst nightmare is Donald Trump running in the 2024 presidential election. To counter this possibility, Biden must strengthen his power base by regaining the support of blue-collar workers in the 2022 midterm elections. This sense of crisis is likely behind Biden's rapid rollout of measures targeting the coronavirus and economy.

Many questioned whether Biden could spare time and energy for diplomacy, given the serious divide in U.S. politics. Yet, his administration has been trying hard to contain China by repairing the country's relations with allies and friends.

The administration's deftness can be seen in its linking of domestic policy with diplomacy.

The agreement reached at the U.S.-Japan summit included cooperation in critical technologies and supply chains. While the move is officially aimed at checking China, the measures closely match Biden's massive infrastructure investment plan to promote the U.S. manufacturing sector in areas such as semiconductors.

Suga is also racing against the clock but on a shorter timeline. His term as president of the LDP will end in September, while incumbent lower house members face reelection after Oct. 21. Suga would likely be pushed aside if he fails to win the party election and lead it to a victory in the national vote following the lower house's dissolution.

Suga, like Biden, sought to leverage the summit as a means of bolstering his cabinet's popularity by touting deals on climate change. After returning home, Suga drastically raised Japan's greenhouse gas emissions target for fiscal 2030, based on the two countries' agreement to "lead a sustainable, inclusive, healthy, green global economic recovery." The Suga cabinet now lists "green growth" as its key policy. 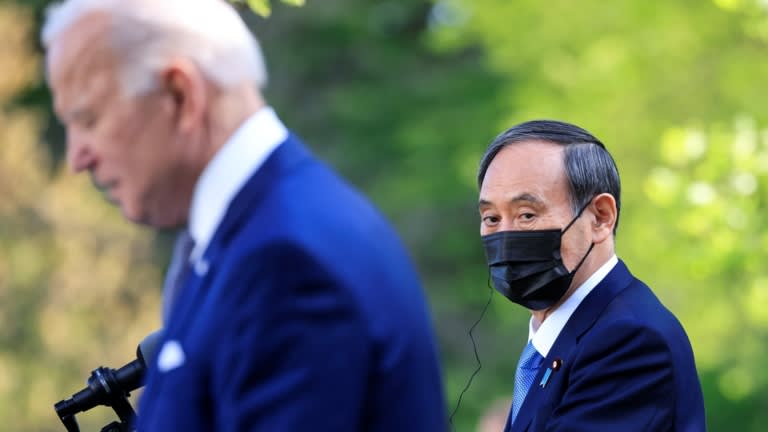 But what has drawn the two leaders closer is Chinese President Xi Jinping, who is also under pressure dealing with a series of key events at home: the Chinese Communist Party's centennial celebration in July; the Winter Olympics in Beijing in February 2022; and the once-in-five-year party Congress in autumn next year.

While Xi cannot afford to show any weakness to the U.S. and Japan, he will need to carefully calculate China's relationships with the two countries to make the events a success.

One advantage Xi has over his rivals is time. He has already extended his tenure indefinitely by eliminating presidential term limits through a constitutional amendment.

Because the leaders of Japan, the U.S. and China face constraints at home, all three must be ready for serious diplomatic acrobatics to find common ground in areas of rivalry.

"China provoked the U.S. by seeing itself as an equal and challenging [the U.S.] before it was ready," said Masahiro Kohara, former graduate school professor at the University of Tokyo and former consulate general in Shanghai when he was with the Ministry of Foreign Affairs. "China may be thinking it acted a bit too early," he said.

For the U.S. and Japan, it is important to tighten cooperation in areas of interest for China such as climate change and "make it clear who will lead the world through universal values and soft power," Kohara said. Only this strategy -- combined with a stronger deterrent -- could move China, he said.

Suga's political foundation has weakened as a result of the LDP's recent setbacks in local elections, including the upper house reelection in Hiroshima Prefecture. Biden thus may be watching closely whether Suga can remain as a viable partner.

Only time will tell whether Suga and Biden can overcome their political hurdles at home to allow them to strengthen their bond.