TOKYO -- President Joe Biden marks his 100th day in office on April 30, ending what historically represents a "honeymoon period" for new U.S. leaders during which opposition lawmakers and the news media avoid heavy criticism of the administration.

But the practice has fallen into disuse in Washington recently due to intense partisan confrontation. Biden's predecessor, Donald Trump, clashed with the media from his first day in office and received no honeymoon period.

Biden's public approval rating stands at 59% as of April, much higher than Trump's 39% but comparable to Presidents Barack Obama, George H.W. Bush and George W. Bush at this point in their first term, according to Pew Research Center, a Washington-based research company.

"[It is] a better score in this divided world," said Bruce Stokes, a polling expert at the German Marshall Fund, a Washington-based think tank, of Biden's high support despite an unusually polarized U.S.

I asked six American, Japanese and Australian experts to assess the Biden administration's first 100 days, and all of them gave a top grade of an A or B. Though the scores were partly inflated by the continuation of chaotic developments during the Trump presidency, symbolized by the Capitol riot in January, it is more or less surprising that the Biden presidency has achieved a favorable start.

Biden has cultivated a reputation as a self-made leader with integrity and long experience in politics. But Biden faced skepticism about his leadership due to his occasional slip of the tongue and because he is the oldest person to assume the presidency. His ability to unite the Democratic Party as radical left-wing lawmakers come to the forefront was questioned. Progress on COVID-19 vaccinations is one of the major early achievements by the Biden White House. Americans already have received over 200 million shots, double Biden's initial target of 100 million in his first 100 days.

But Biden benefited from the Trump administration's "Operation Warp Speed" program, which facilitated the development and production of vaccines and helped pave the way for reaching this target ahead of schedule.

Biden, who won the presidency in his third try, seems to have learned from past failures.

In 2008, Biden withdrew from the Democratic primary contest at an early stage. He later accepted Obama's offer to join the ticket as the vice presidential candidate, running with the younger, less experienced presidential hopeful after deep contemplation. Biden's bid for the White House in the 2020 election overcame early stumbles and primary defeats. 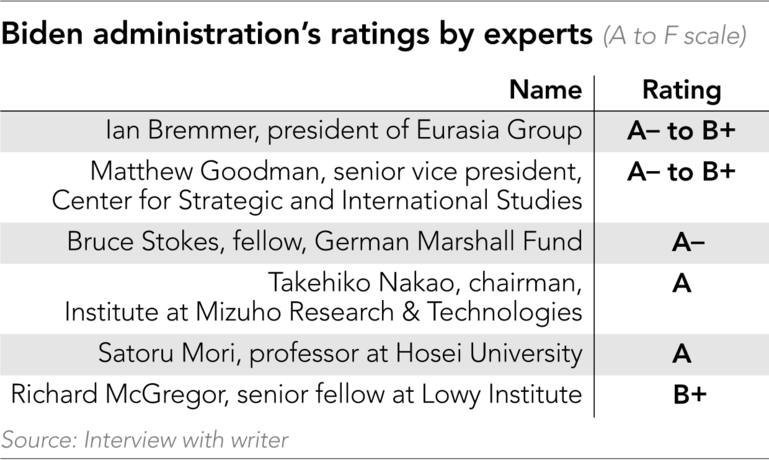 Shinzo Abe, whose first term as Japan's prime minister was cut short in 2007 due to his chronic illness, is known to have written reflections in a notebook for pursuing his return to the premiership. Similarly, Biden seems to have taken lessons from his time in the Obama administration -- particularly regarding China policy and fiscal measures.

A symbolic outcome of the first lesson was observed at the high-level diplomatic meeting between the U.S. and China in Alaska on March 18. Secretary of State Antony Blinken, delivering his opening statement in the presence of reporters, criticized China harshly over human rights abuses and other issues. As reporters were about to be ushered out of the room, Blinken waved for them to stay before countering China's rebuttals.

In the background to this performance was Obama's conciliatory policy toward China during his first term, which aroused criticism from the Republican Party. Obama took a tougher stance on China in his second term, but Biden might remember the continuation of criticism against the early policy toward China. The Biden administration is occasionally ridiculed as "a third Obama term" because its diplomatic team returns many members of the Obama White House, such as Blinken, national security adviser Jake Sullivan and Kurt Campbell, the National Security Council coordinator for Indo-Pacific affairs.

Following the exchange of harsh words at the Alaska meeting, the U.S. and China were reported discussing cooperation in addressing global warming and other problems. But the first blow from the U.S. side successfully created the image that Biden's White House differs from that of Obama.

The plan drew warnings of excessive stimulus, including from Harvard University professor Lawrence Summers, who served as director of the National Economic Council in the Obama administration. But Biden's economic team, which includes Treasury Secretary Janet Yellen, is pushing ahead with a "high pressure" policy that prioritizes employment over inflation. Biden also has set aside $2 trillion for infrastructure investment and other measures as a second stimulus package.

The tough stance on China has won bipartisan support. And opinion polls show strong public backing for the Biden administration's coronavirus relief payment of $1,400 per person and other spending programs, despite receiving no Republican cooperation.

Biden will face more scrutiny by the news media after the honeymoon period. The Republicans will toughen their adversarial stance before the 2022 midterm election. Does the administration have weak spots?

Sullivan and others heading Biden's diplomacy have adopted a "foreign policy for the middle class," stressing that U.S. foreign policy should not be left exclusively to experts who emphasize international relations and events but instead be designed to benefit middle-class American citizens.

This foreign policy represents a reconstruction after Democrats were defeated in the 2016 presidential election by Trump, who was hostile toward Washington elites and experts without knowledge of the difficulties among ordinary people.

This policy has something in common with a pandering approach to politics. A "policy for the middle class" sounds fine, but it is designed as an election tactic and always risks falling into populism.

Both Democrats and Republicans are now advocating "a trade policy for the middle class," said Adam Posen, president of the Peterson Institute for International Economics in Washington. Posen warned in his latest treatise in Foreign Affairs that the policy risks adding fuel to trade protectionism and delays structural adjustments to domestic industry.

For a Biden administration that has achieved a strong start, the biggest risk down the road may be that the policy for the middle class will run out of control.