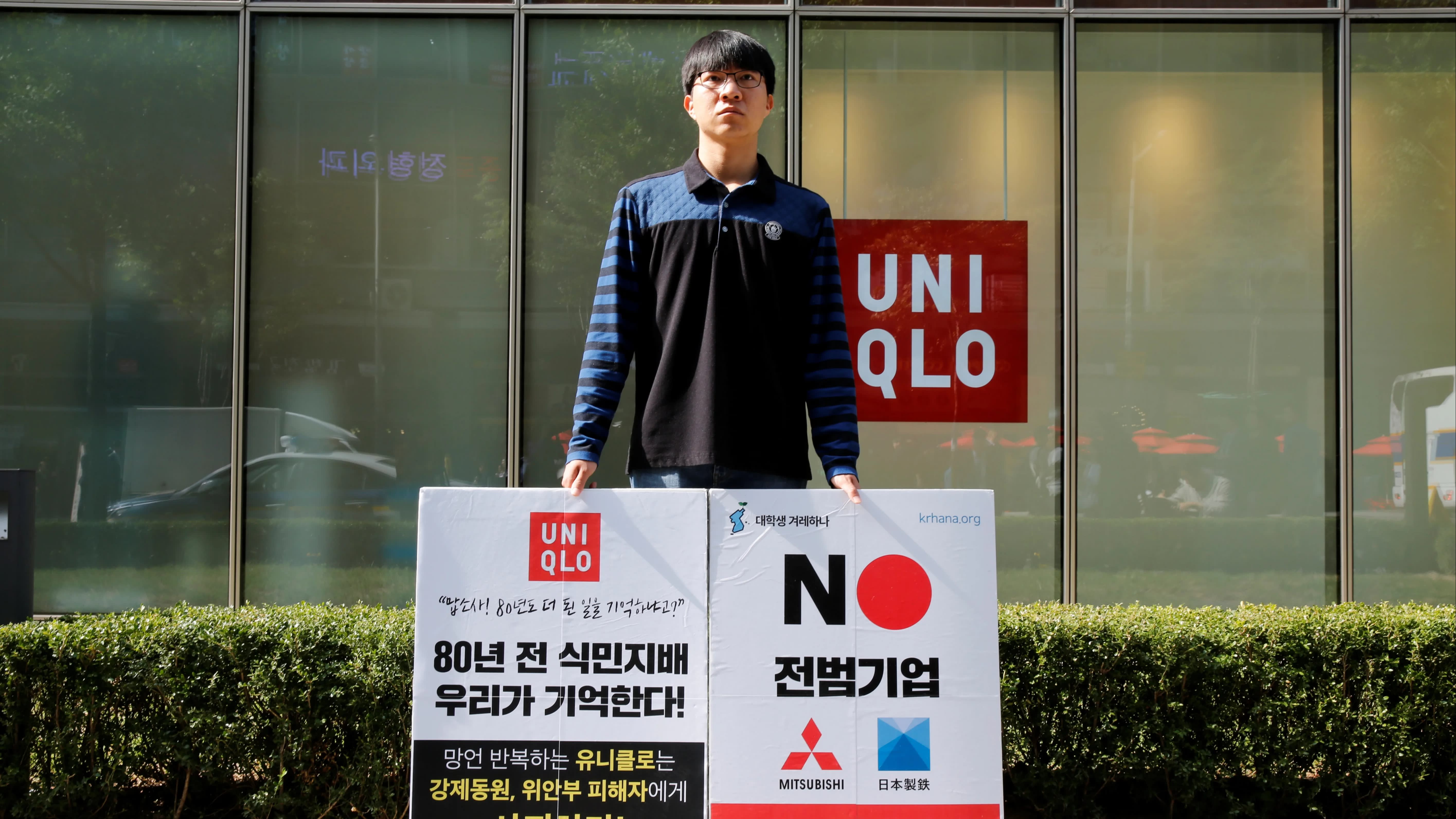 SEOUL -- Campaigns calling for a boycott of Japanese products sprout up in South Korea every time relations between the neighbors hit a rough patch. They are typically short-lived.

This time is different. Consumers' anger toward Japan, which ignited in the summer, still smolders. Behind the current boycott's staying power is young people who have kept up the momentum through social media.

In the ad, which aired in South Korea, a 13-year-old girl asks a 98-year-old woman how she dressed when she was the girl's age. The old woman replies: "I can't remember that far back."

The Korean subtitles for the ad said, "No way! How can I remember something from 80 years ago?" Eighty years ago, it was 1939. At that time the entire Korean Peninsula was a Japanese colony.

The addition of the phrase "80 years ago," which was not in the original English version, stirred criticism. South Koreans accused Uniqlo of mocking Korea's wartime "comfort women," many of whom are still demanding an official apology and compensation from Japan. A TV commercial for Japanese casual clothing brand Uniqlo was pulled from the airwaves in South Korea after an outcry. The subtitles read: "No way! How can I remember something from 80 years ago?"

Soon after, a video parodying the commercial appeared on the internet. In the video, a South Korean student and a woman who was a wartime laborer appear and say: "We cannot forget our terrible agony, ever." Uniqlo's South Korean unit pulled the commercial on Oct. 19.

The backlash against the ad came just as customers were beginning to trickle back into Uniqlo shops in Seoul, looking for the brand's popular Heattech clothing or down jackets for fall.

Some South Koreans think the brouhaha over the ad overdone. One student in his 20s called it "a bit far-fetched to link the ad to the comfort woman issue." But most social media commenters welcomed the broadside against Uniqlo, accusing it of adding "kindling" to the fire. A South Korean student and a woman who worked as a wartime laborer appear in an online video protesting the Uniqlo TV ad. The sign reads: "[We] can't forget."

In 2005, when Shimane Prefecture in Japan created "Takeshima Day" -- a string of islands controlled and called Dokdo by South Korea -- a Honda Motor dealer in South Korea was set on fire. But a boycott that followed soon petered out. In 2013, a boycott in protest against Takeshima Day was planned by activists but it, too, fizzled.

So why has the latest outbreak of anti-Japanese sentiment persisted?

An analysis of search terms on portal sites and social media by Emforce, a South Korean digital marketing company, is revealing. Its report found that the current boycott is driven by people their 20s and 30s, but without an organized leadership. It also suggests that their initial anger toward Japan has morphed into something different: a sense of satisfaction at seeing their online campaign have an effect.

The latest boycott was set off by Japan's announcement on July 1 that it will -- and later did -- tighten restrictions on exports to South Korea. The Emforce report points out how terms related to the boycott on social media have changed over time. Initially, emotional words such as "irritated," "patriotism" and "anti-Japan" were predominant. More recently, words like "fun," "rationally" and "falling sales" appear more frequently.

The new phase of the campaign includes practical tips on how to make the boycott sting, such as monitoring who goes in and out of Uniqlo shops, and introducing alternative products on websites. The tips have gone viral on social media.

The effect has been to make South Korean consumers feel guilty for buying Japanese goods. Uniqlo stores have had few customers lately, and Japanese beer has disappeared from supermarket shelves. Many people have canceled trips to Japan.

Once they began to see their efforts pay off, campaigners began to feel more like they were playing a fun game. As a result, report concludes that the online activists are settling in for a long struggle.

Ironically, perhaps, the word "boycott" itself has appeared less frequently online since peaking in late July. Instead, one sees a term that did not appear in earlier boycott efforts: "kindling."

If there were no "kindling," public attention would have gradually faded. But the term gave the campaign a second wind. South Korean social media now scrutinizes the remarks of well-known Japanese companies, highlighting their every misstep. The furor over the Uniqlo ad was a perfect example of kindling. Inside the lose-lose trade fight between Japan and South Korea

The boycott in 2013 failed to take off because it was spearheaded by groups of uncoordinated individuals and civil society groups, the Emforce report determined. Their activities focused on street demonstrations, and participants were mostly older. Young people did not pay much attention to the campaign, the report said. In the latest boycott, social media plays a bigger role, enhancing the ability of young "digital natives" to shape public opinion.

Expressions frequently used in the social media campaign now include "habit" and "routine," the Emforce report said. This indicates South Korea's netizens hope to make the boycott part of daily life rather than a one-off. Emforce predicts the boycott will eventually die down, but says it will take much longer for Japanese goods to regain their former popularity in South Korea.