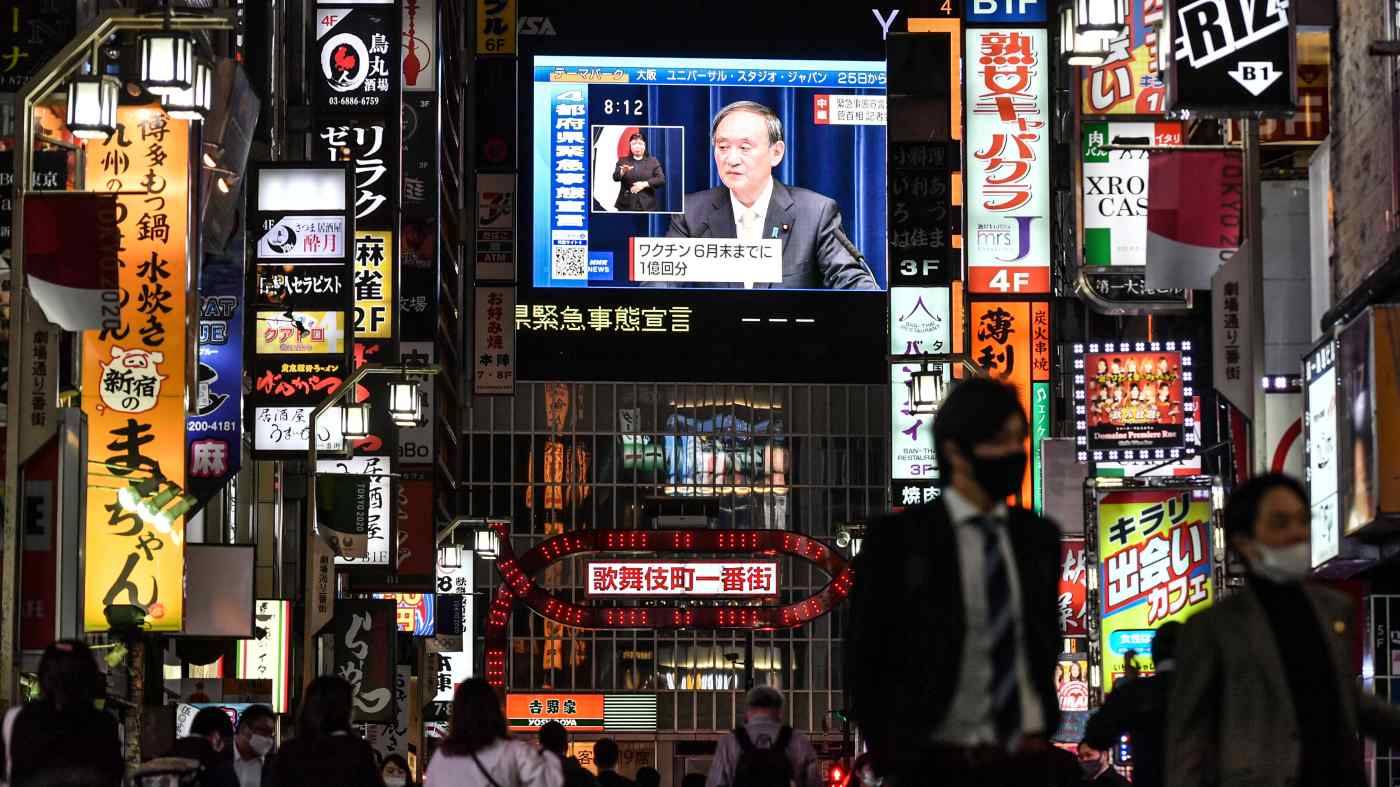 TOKYO -- Japan has the most hospital beds per 1,000 people of any advanced economy, yet a new coronavirus wave has put the country's medical system under strain. Meanwhile, it has vaccinated the smallest share of its population among leading economies.

The cumulative death toll in Japan due to the coronavirus pandemic is about 11,000, a relatively small number compared to the U.S. and major European nations. However, Japan's current plight highlights not only a lack of medical preparedness but also deeper trouble with setting national priorities.

The problem is that Japan has a policymaking approach designed only for normal times and cannot flip a switch when a situation escalates. Japan's train runs on a single track rather than a network.

The U.S. and Britain were initially slow in responding to the pandemic. But as deaths mounted, the nations went into emergency mode and took the lead in vaccinations.

In Israel, where a state of quasi-emergency is the norm, the country acted fast to secure vaccines, reportedly by mobilizing its military intelligence network. Taiwan, which operates in a similar context, was quick to track the movement of infected people using information from mobile phones.

Japan falls short in quasi-emergency preparedness in every aspect. Symbolic of this is a lack of legal mechanisms to enforce its pandemic-related restrictions, meaning the government can only ask people to stay home or businesses to close.

In the era of peace since the end of World War II, Japan, defended by the U.S. military, has gotten along fine with this form of laissez-faire crisis management. The country has striven to put limits on state power out of deep soul-searching over its wartime history.

If the status quo was good enough going forward, Japan would have little to fear. Unfortunately, however, the COVID-19 crisis has exposed Japan's vulnerability. 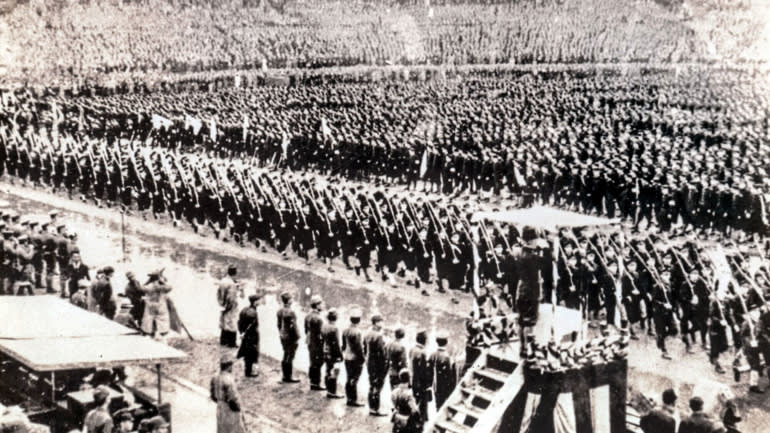 A sendoff party for student soldiers in Tokyo's Jingu Stadium in 1943. Japan went to war against the U.S. without considering any exit strategies. (Nikkei photo)

This is not to say Japan should rush to adopt policies that clamp down on individual rights and ramp up state powers during emergencies. If anything, ramming through such measures could cause counterproductive consequences. That is because Japan's crisis preparedness would not improve if we only gave the government tools of control but neglected to solve the fundamental problem.

After the 19th-century Meiji Restoration set in motion Japan's Westernization, the country faced a series of emergencies -- the First Sino-Japanese War and the Russo-Japanese War. Japan also participated in World War I, and the Second Sino-Japanese War broke out in 1937.

During this period, the state gained stronger control over society. Did this improve Japan's ability to cope with emergencies? The answer is no. Unable to manage tensions with major powers, Japan rushed headlong into war with the U.S. and the United Kingdom in December 1941. This brought the country to the verge of complete ruin.

What, then, needs to change? Modern history scholars identify at least three flaws that today's Japanese state has in common with governments before and during World War II.

The first is a lack of clear strategic priorities and a tendency toward ad hoc responses. This was seen in the Second Sino-Japanese War. Fighting escalated without a clear purpose or goal. As a result, the government failed to gain sufficient public support for the war effort.

"Trying to whip up fighting spirit, the government in 1937 initiated a 'national spiritual mobilization movement' and tightened its control," Gakushuin University professor Toshikazu Inoue said. "But as the public couldn't see the goal of the Sino-Japanese War, they were not convinced. People dared not risk staging protests against the war itself, but fewer than 20% of households hoisted the national flag. This situation stayed mostly unchanged until Japan lost the war." A woman receives a vaccine shot in Aichi prefecture in April. Many Japan residents no longer take state of emergency decrees seriously. (Photo by Yuki Nakao)

There are echoes of this in the response to the coronavirus pandemic.

"Containing infections, supporting the economy, the Tokyo Olympics -- it's not clear which of these gets priority," Inoue said. "As a result, the [coronavirus] state of emergency declarations have become just a routine, and the public has gradually ceased to take them seriously."

The second problem, which contributes to a lack of priorities, is a silo mentality -- long considered a flaw in Japanese organizations. Japan has struggled to provide vaccinations, COVID-19 testing and sufficient hospital beds quickly for a number of reasons. But "the fundamental problem is a lack of cooperation and coordination between governmental agencies and between the central and local governments," a government official said.

Take vaccines for example. They fall under the responsibility of the Ministry of Health, Labor and Welfare, while the Ministry of Internal Affairs and Communications coordinates between the central government and local governments. The Ministry of Land, Infrastructure, Transport and Tourism takes charge of their transportation. U.S. and European governments, too, divide different roles among different ministries. But Japanese ministries are not particularly good at effectively coordinating interagency processes.

The silo mentality of Japanese government agencies was even worse during the war. The Imperial Army and Navy would compete for funding and materiel, and there were constant rivalries between factions within each branch. At the Ministry of Foreign Affairs, the pro-U.K., pro-U.S. faction and the pro-Axis faction were opposed to each other. No consensus on national policy could emerge from these divisions.

"Before the war, Japan recognized that military expertise was important, and worked to produce elite military officers," Teikyo University professor Kiyotada Tsutsui said. "This made it difficult to nurture personnel who had broad perspective, though it may have produced officers with a wealth of knowledge about war. This, in turn, worsened the silo mentality in the military."

Today, "there are many experts on health care and infection prevention, but there are few leaders who can objectively analyze the overall situation and coordinate for policies," Tsutsui said, adding that in this respect, "the prewar culture has not changed." 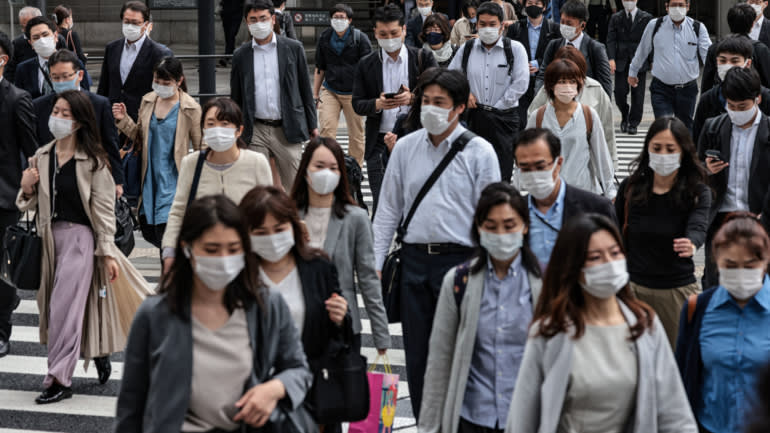 Tokyo commuters on May 6. The Japanese government has sat on its hands since 2009, when a new strain of influenza emerged. (Photo by Yo Inoue)

The third flaw is the tendency toward groundless optimism, where the thinking is: "It will all work out."

Japan has not been good at preparing for worst-case scenarios. In the most extreme case, Japan initiated a war against the U.S. that it had little chance of winning, yet it had not prepared any clear exit scenarios.

In terms of public health, after a new strain of influenza emerged in 2009, a review committee issued recommendations for preparing for a major outbreak. These measures called for upgrading health centers, PCR testing and vaccine development, only to be shelved while the next pandemic was lying in wait.

"When it comes to frequent earthquakes and typhoons, Japan has world-class responses. But it neglected to prepare for the pandemic," said Nobukatsu Kanehara, who served as deputy secretary-general of the National Security Secretariat under former Prime Minister Shinzo Abe.

"Even more serious is the risk of war," Kanehara continued. "The threat is there but Japan just closes its eyes. There's been little progress in efforts to develop a necessary crisis management."

This year marks the 80th anniversary of the Japanese attack on Pearl Harbor. The coronavirus pandemic has revealed long-neglected flaws in Japan's preparedness and decision-making. Unless it begins to correct them now, an even worse fate could lie in store.