Can American democracy be saved? WASHINGTON -- Toward the end of a landmark speech on Wednesday, on the eve of his 100th day in office, U.S. President Joe Biden said, "We have to prove democracy still works."

These past few months have seen action to "restore the people's faith in democracy to deliver," Biden said in his first speech to a joint session of Congress. More than 80% of the seats in the chamber were empty as a precaution against COVID-19.

Still fresh are the public's memories of the Jan. 6 rioting where supporters of then-President Donald Trump stormed the Capitol in an attempt to overturn the 2020 presidential election that Biden had won. Then-Vice President Mike Pence and House Speaker Nancy Pelosi only narrowly escaped the mob, and the incident was widely viewed as an assault on American democracy.

"We have to come together to heal the soul of this nation," Biden said in Wednesday's speech.

There have been quiet signs of progress. Biden has signed unprecedented $1.9 trillion coronavirus relief legislation and met key vaccination milestones significantly ahead of schedule. Roughly 40% of Republican supporters approved of Biden's pandemic response in a recent Reuters/Ipsos poll. Protesters backing then-President Donald Trump are sprayed with tear gas during clashes with police at the Capitol on Jan. 6.   © Reuters

Since the Reagan administration of the 1980s, the push for smaller government has been a major force in American politics. But that philosophy has lost momentum in the face of the pandemic as support builds for going big on fiscal and monetary stimulus to create a so-called high-pressure economy. The U.S., along with China, has emerged a key driver of global economic growth.

An outsize portrait of Franklin D. Roosevelt now hangs in Biden's Oval Office. After taking office in 1933 amid the Great Depression, Roosevelt enacted a series of large-scale projects and reforms under his New Deal that boosted employment and revived the economy. Biden is taking inspiration from his forebear with plans to spend trillions of dollars to repair infrastructure and help families, funded by taxes on the wealthy.

But Biden has also positioned himself as the anti-Trump. Climate change, largely ignored by the previous administration, has been at the forefront of Biden's policies from the start and is key to his job creation plan.

It is crucial for Biden to rack up achievements for his Democratic Party to win the midterm congressional elections in 2022 and avoid losing momentum like former President Barack Obama, under whom he served as vice president. But in some ways, Biden's approach has exacerbated political divisions in the U.S.

"These are the most radical first three months of a presidency since 1933, the most divisive -- and certainly the most dangerous," wrote Victor Davis Hanson, a senior fellow at the conservative Hoover Institution think tank, in an April 18 commentary.

Pointing to Biden's policies on immigration, cancellations of pipelines and fossil fuel leases, planned tax hikes, and his rhetoric on the Green New Deal, Hanson told Nikkei that they are "the most left-wing agendas since FDR." 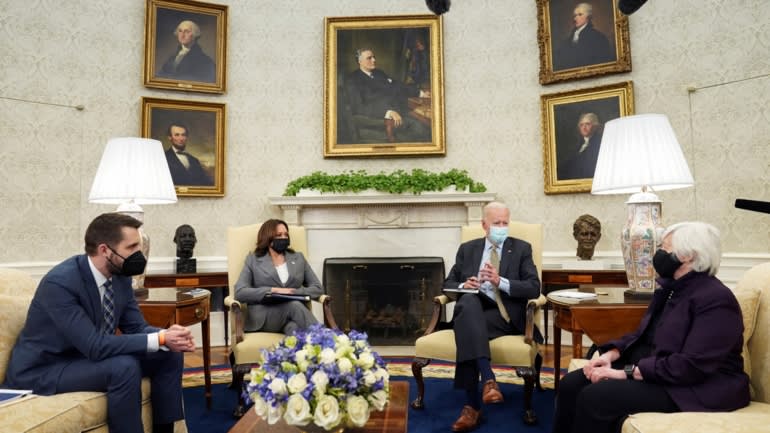 "Remember, had the pandemic not hit, along with the lockdown and self-induced recession, Trump probably would have been reelected on the strongest economy in 50 years," Hanson said.

In 1933, a month before Roosevelt took office, Nazi leader Adolf Hitler became chancellor of Germany. The autocrat's rise, which fed off public anger and exploited weaknesses in the democratic system, eventually plunged the globe into a second world war.

The world once again faces the rise of autocrats, this time in countries like China and Russia. But democracies face a mounting challenge both in terms of their reputation and what they are capable of, according to Yascha Mounk, associate professor of the practice of international affairs at Johns Hopkins University.

According to a CBS News poll in early February, 57% of Republicans see Democrats as the enemy -- not political opponents -- while 41% of Democrats see Republicans as the enemy. The authorities are on edge as extremism continues to grow after the events of Jan. 6, and American democracy remains on shaky ground.

"Many people within the United States actually have little confidence in the democracy of the United States," top Chinese diplomat Yang Jiechi told U.S. counterpart Antony Blinken at a tense meeting in Alaska in March.

In contrast, "the leaders of China have the wide support of the Chinese people," Yang said.

Sino-American tensions are only increasing over human rights, the Taiwan Strait, the race for technological supremacy and more. Climate change has also emerged as a national security issue, while the world continues to battle COVID-19 and other infectious diseases.

Bridging the political divide in the U.S. will require sustained, principled efforts. "It's the time for stability and calming things down, while at the same time getting things done," prominent pollster John Zogby said in an interview.

The administration should seek to unify the country by focusing on younger generations and diversity, Zogby recommends.

Rebuilding democracy here is a crucial task that could impact the global order for decades to come.

"Autocrats will not win the future," Biden said Wednesday. "We will. America will. And the future belongs to America."