Can democracy tell a better story than scripted communist drama? BEIJING -- The red banners adorning buildings add to the celebratory mood in the capital, with large white characters spelling out the Chinese Communist Party slogan "Remain true to the original aspirations and keep the mission firmly in mind."

Not just in Beijing, but across China, people are wholeheartedly embracing the party. Tourists make pilgrimages to the sites of the party's important milestones in so-called red tourism. Waving red flags, they happily pose for photos in front of statues of revolutionary leaders and exhibition halls.

Though China has strict internet controls, many of its citizens live in high-tech cities with access to information from overseas. Why, then, does the CCP continue to receive so much "love" from the public?

Adept storytelling that draws on people's empathy seems to be the answer.

Television dramas produced to mark the party's 100th anniversary are a case in point.

The party has a less-than-stellar track record here. At the height of the anti-Japan movement, it released many shows with threadbare plots where heroic CCP members defeat the evil Japanese army.

But this time, seasoned actors delivered strong performances from well-written scripts depicting a woman executed for standing up for fellow female workers who were treated like farm animals, for example, or the many young people who died dreaming of a better society. These are not far-fetched stories for ordinary Chinese people. The characters are their grandparents and great-grandparents.

In his centennial speech Thursday, President Xi Jinping recalled the "ravages" China suffered at the hands of foreign forces after the Opium War. He stressed that despite it all, the nation became the world's second-largest economy under the CCP's leadership. This narrative resonates with Chinese people.

China is trying to create its own economic sphere through its Belt and Road infrastructure initiative. In emerging countries that are part of China's economic sphere, Beijing will push a narrative touting the smart cities and convenience made possible by Chinese technology.

Xi also pledged to realize goals set for the 2049 centennial of the People's Republic of China. It is unclear what he meant by "building a great modern socialist country," but it is safe to assume that China aspires to be a superpower rivaling the U.S. economically, militarily and technologically.

The U.S. is alarmed by the new Chinese ambitions. The administration of U.S. President Joe Biden is trying to build an alliance of like-minded nations to counter China's rise, setting a path for an inevitable showdown between democracy and totalitarianism.

Can a democratic society tout a narrative that wins hearts and minds? Many in China feel that the West is trying to impose democracy, which does not suit their own country, with unveiled condescension. 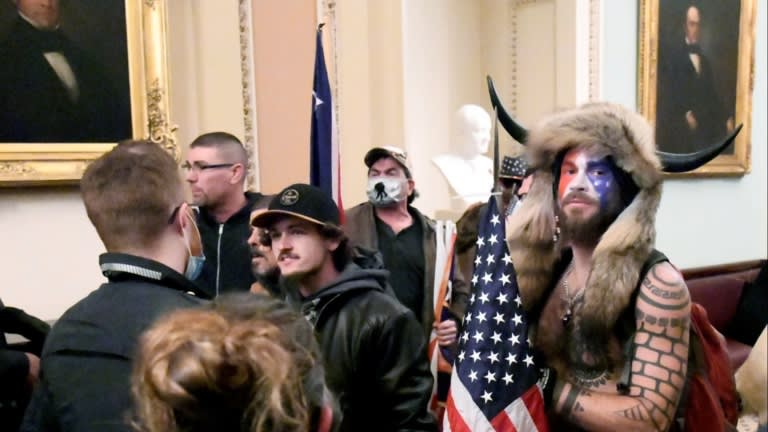 Supporters of then-U.S. President Donald Trump on the second floor of the Capitol on Jan. 6.   © Reuters

In democracy, majorities make decisions but try to balance them with the interests of minorities. People's lives cannot be lived by the greatest common denominator. In totalitarianism, minorities are often left out.

In China, unambitious young people who do not try to buy houses or marry are labeled "lie-flatters," who reject the pressure cooker race for a better standard of living.

Their future is less than rosy. China lacks a safety net for those who drop out of the competition. On top of supporting themselves, caring for their aging parents is also their responsibility.

There will come a time when the fruits of growth are not distributed equally to people, creating a new underclass. What happened in Xinjiang's Uyghur Autonomous Region and Hong Kong can befall other Chinese.

When it does, will people be able to criticize social injustices? Democratic ideals that do not devalue the interests of individuals can create a narrative that resonates with Chinese people.

The question is whether a democratic system can still hold up its original promise. Elections in the U.S. and Europe seem to suggest that silencing opponents is the sole goal of building a majority.

Democracy evolved into what it is today after a long, tortured history. Ahead of the seemingly inevitable showdown with totalitarianism, democracy needs to hone its narrative of fairness to all.