China, a troubled giant, poses growing risk to the world

Facing growing frustration at home, Xi may be apt to act with least composure Chinese President Xi Jinping and Premier Li Keqiang at the closing session of the National People's Congress in Beijing on May 28: Xi and Li are said to be at odds over the economy.   © Reuters
HIROYUKI AKITA, Nikkei commentatorJune 12, 2020 17:20 JST | China
CopyCopied

TOKYO -- For people around the world, the spring of 2020 has not been a happy one. The coronavirus pandemic has so far killed an estimated 420,000 people and threatens the livelihoods of up to 1.6 billion.

China, where the pandemic began, has its own troubles. Top of the list is massive job losses. While the official unemployment rate in the country stands around 6%, that does not include people formally registered as living in rural areas. If migrant workers who have seen their jobs in cities disappear are included, the true joblessness figure jumps to around 20%, according to a private estimate.

In China, unlike in the U.S., anger over unemployment does not usually spark mass protests. Freedom of expression is severely limited in the country. But keeping a tight lid on dissent risks an explosion of rage down the road.

The ruling Communist Party must be worried. Some China watchers in Hong Kong say there are signs President Xi Jinping and Premier Li Keqiang are at loggerheads over how to salvage the sinking economy. They point to Li's speech to the National People's Congress, China's legislature, on May 22. In a notable break from tradition, Li did not set an economic growth target for this year. He also made no secret of his concern about job losses.

Japanese experts familiar with developments inside the party offer an intriguing explanation for Li's unconventional "work report," as the address to the congress is called. Xi's close aides wanted Li to speak more optimistically about the economic outlook to promote the narrative of China's "victory" over the virus under Xi's leadership. But Li, who is responsible for economic policy, resisted, the experts say. The National People's Congress rubber-stamped a national security law for Hong Kong during its closing session at the Great Hall of the People in Beijing on May 28.   © Kyodo

The World Bank predicts China's economy will grow by an anemic 1.0% this year. That would be the slowest expansion since the country began opening to the outside world in the late 1970s.

Chinese people have tolerated Communist Party rule, despite restrictions on their political freedom, because their living standards have risen steadily over the decades. But a bout of low economic growth and high unemployment would shake the party to its core. Xi's worst nightmare is that the People's Republic will meet the same fate as the Soviet Union, which collapsed in 1991, due in part to the country's economic disarray.

One episode suggests just how worried Xi is about this scenario. When he became head of the party in 2012, Xi ordered all senior members to watch a documentary about the disintegration of the Soviet Union. For Xi, the demise of the Soviet Union is an object lesson in what could happen in China.

At a May 19 virtual forum organized by the National Committee on U.S.-China Relations, Robert Zoellick, the architect of former President George W. Bush's China policy as deputy secretary of state, who later served as the president of the World Bank, pointed out that the coronavirus outbreak could have endangered the party's rule. "I believe if President Xi had been unable to control COVID-19, it would have posed a threat to the party's legitimacy," Zoelick said.

The question is how China's concerns about domestic stability may affect its behavior toward other countries. There are three main possibilities.

One is that it might try to avoid unnecessary friction with others in order to concentrate on shoring up its rule at home. Beijing would seek to maintain friendly ties with other countries by adopting a conciliatory foreign policy.

Another possibility is that China may become more diplomatically rigid, adopting a hard-line stance toward many countries.

The third possibility lies somewhere between the first two, with Beijing adopting a benign or a hostile attitude, depending on how it sees its bilateral relationship with the country in question.

Clearly, the first scenario would be best for the rest of the world. But China's behavior since the start of the coronavirus outbreak hints that the second possibility is most likely.

China has frequently sailed surveillance ships in waters around the Japanese-controlled Senkaku Islands. On May 8, two China Coast Guard ships pursued a Japanese fishing boat in Japanese territorial waters around the islands, which are also claimed by China -- the second such provocative move in the past year.

In April, Beijing announced it was setting up two administrative units on islands in the South China Sea. Its sole aircraft carrier, the Liaoning, conducted drills in the Taiwan Strait. China also decided on May 28 to impose a national security law on Hong Kong to crack down on pro-democracy activists in the territory, drawing protests from around the world.

China appears on the brink of a new cold war with the U.S. Under normal circumstances, Beijing would have an incentive to lower tensions with U.S. allies and partners, such as Japan, Australia, India and countries in Southeast Asia. Traditionally when its ties with the Washington are strained, China tries to drive a wedge between the U.S. and its friends in the Asia-Pacific region.

Beijing used this tactic when it became internationally isolated after the 1989 Tiananmen Square massacre. Abandoning hopes of quickly mending strained relations with the U.S. and Europe, China moved closer to Japan as a first step toward an eventual thaw with Western democracies. A senior Japanese official at the time described China's game plan: Use Japan as a tool to end its isolation. 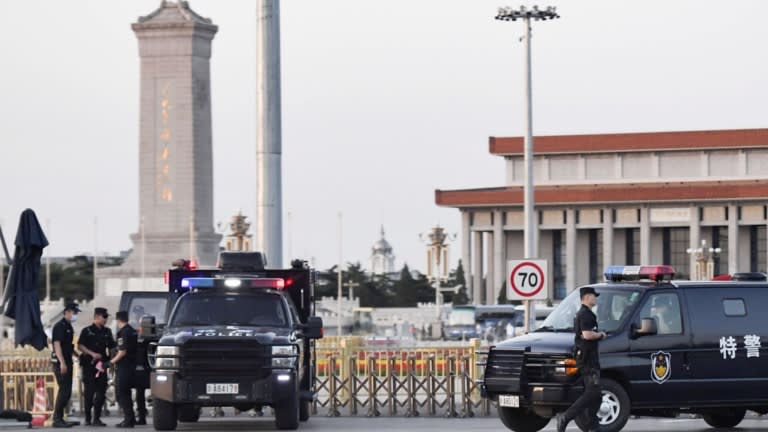 Security is tight in front of Tiananmen Square in Beijing on June 4, the anniversary of the bloody crackdown on student protesters in 1989.   © Kyodo

China was led at the time by the charismatic Deng Xiaoping, who steered the Communist Party's foreign policy with great skill. Xi has not so far shown the same degree or sophistication or composure.

Like people, nations tend to lose the ability to make levelheaded decisions when they are gripped by anxiety. China may respond to its current stresses by adopting an unreasonably harsh stances toward certain countries and behaving unpredictably.

Whether or not the Chinese Communist Party is really in such dire straits, there is little doubt that it is plotting a course marked by aggressive diplomatic posturing.

The world is struggling to deal with a China that is feeling its oats and becoming more assertive in all respects. But along with its ambitions, China is tormented by anxiety over its internal problems. Dealing with a troubled giant with huge military and economic muscle will be an even more difficult challenge in the future.