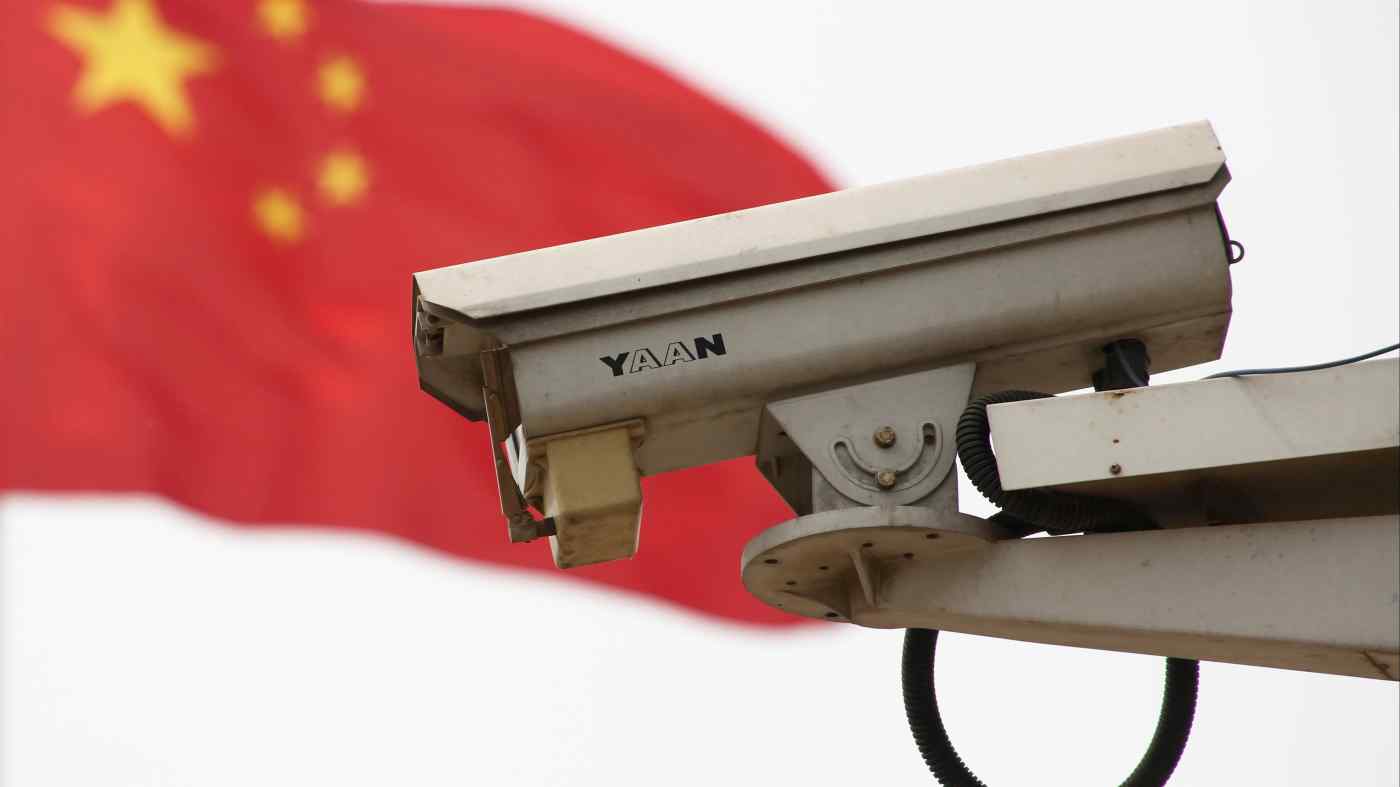 TOKYO -- China is building and exporting an Orwellian dystopia, supported by a network of ubiquitous security cameras and advanced facial recognition technology.

At home, China is working to establish a "social credit system" as a new and powerful tool to control the public. The system will rate the "trustworthiness" of all Chinese citizens based on a wide range of criteria, including their credit card records, traffic violations and contributions to the nation. Citizens with low "social credit scores" will be punished in various ways, such as not being allowed to travel.

Not only is its quest to build a mass-surveillance society proceeding apace, China is outmaneuvering the U.S. In addition to developing a vast system to track and control citizens at home, the country is also selling its approach to public security internationally.

China's Orwellian vision of the future has huge implications for how its battle with the U.S. for global hegemony will play out. At stake is the question of who will lead in building and maintaining order in the Indo-Pacific region, an area vital to both American strategic interests and to Japan's future.

In this war for hegemony, political power is as important as economic and military power. If other Asian countries tread the path of democracy, it will be easier for the U.S. to maintain its influence in the region. If, however, many Asian nations opt for authoritarianism, the foundations of the U.S.-led liberal order will gradually erode.

Seen in this light, the spread of China's AI-powered system of public surveillance does more than threaten human rights in many parts of the world; it could create serious geopolitical challenges for those countries that remain committed to the liberal order.

According to a report by Freedom House, a U.S. human rights group, at least 18 countries are building AI-based mass-surveillance systems with China's help, including Zimbabwe and Uzbekistan.

The trend is also apparent in Southeast Asia, a region into which Japan has poured aid for decades in hopes of encouraging reform. According to media reports, Thailand, Malaysia and Vietnam have already struck deals with Chinese companies to introduce state-of-the-art public surveillance systems. Myanmar is planning to use Chinese AI to spot traffic violations.

Democracy in all these countries is in a delicate transitional phase. In Thailand, a general election was held in March, supposedly as a step toward returning to democracy after years of military rule. But former junta leader Prayuth Chan-ocha returned as prime minister in June.

Myanmar's government, whose de facto leader, Aung San Suu Kyi, was the face of the country's pro-democracy movement, has been roundly criticized by the international community for violent suppression of the Rohingya, a Muslim minority group. Observers worldwide have raised concerns the country may be backsliding toward autocracy.

In May, Malaysia had its first change in ruling parties since independence, but Prime Minister Mahathir Mohamad is struggling to boost his standing with the public amid ethnic tensions in the country.

Vietnam is pushing through economic reforms, but the Communist Party has maintained its monopoly on power and has made no move toward political reform.

Introducing Chinese AI-powered surveillance systems in these countries will hardly promote democracy in the region.

Although there is money to be made selling hardware and software, money is not the only prize China is after in exporting its surveillance society model. Some Chinese companies offer to help foreign governments analyze the huge amounts of facial recognition data collected through their systems.

This gives China access to tremendous amounts of data on facial features, helping boost the accuracy of its facial recognition systems, which compare that information against a database of known faces to find a match. In addition to the U.S., democracies in Japan and Europe and elsewhere worry that China may gain political influence over others by building ports and railway lines in strategically important areas in the Indo-Pacific region through Beijing's Belt and Road Initiative. To counter what they perceive as a Chinese campaign to expand its sphere of influence, the U.S. and Australia created a fund last autumn to support the development of infrastructure in the region.

But the spread of China's surveillance technology has more worrying strategic implications than flashy building projects. Chinese-funded ports and railways will not necessarily undermine democracy in host countries. But sophisticated systems that let authorities to keep tabs on people could see countries with immature democratic institutions morph into dictatorships.

That is not to say that China's exports of AI technology are driven solely by evil intent. Such technology could be used to improve air traffic control systems or to better manage ground transportation, for example. But applying next-generation technology to keep an eye on the citizenry is more likely to foster totalitarian rule.

Another worry is that China is exporting not only hardware for civil surveillance but legal structures that enable digital dictatorship.

China's internet security law, which came into force in June 2017, exemplifies Beijing's legal approach to monitoring people's activities. The law requires all data collected in China to be stored within the country and bans transfer of data out of the country without permission from the authorities. It also mandates that web-based businesses cooperate with authorities investigating matters that may threaten the "safety of the nation."

It effectively sets boundaries in cyberspace and cuts China out of the global internet, while making it easier for the government to find and eliminate information it does not like.

Depending on how the law is enforced, foreign companies operating in China may also be required to disclose information under the pretext of ensuring public safety, or risk punishment.

The law has set off alarm bells among security policymakers in the U.S., Japan, Europe and Australia, but the situation is getting worse. Earlier this year Vietnam enacted a similar law. If more countries follow suit, the global internet could become seriously snarled.

It is vital for Japan, the U.S., Europe and Australia to take coordinated action swiftly to stop this trend. China's efforts to expand its global influence through the power of AI to monitor and control people should not be taken lightly.

Unlike a democracy, China can gather personal data on its 1.3 billion people and develop its AI-based surveillance systems without concern for human rights. And it can collect personal data on people elsewhere through business contracts with the foreign governments that adopt its systems.

What can the world's democracies do in response? Unfortunately, there is no magic bullet for countering Beijing's strategy. But there are at least two things they can do. The U.S., Japan and Australia have barred Chinese telecommunications equipment maker Huawei Technologies from their 5G networks, citing security concerns. These governments are concerned that China will use Huawei as a tool for espionage.

Although Huawei has strenuously denied allegations that it acts on Beijing's behalf, one diplomat involved in the decision to ban Huawei's from the country's 5G network says the move was based on a careful analysis of Chinese law, which convinced policymakers that Huawei would not be able to reject a request for information from the Chinese government.

The U.S., Japan and Australia should do more to share their knowledge and concerns about the Chinese company with other countries to alert them to the risk. Even authoritarian countries should be worried about the possibility that China may have easy access to their sensitive information.

The second thing the U.S., Japan, Australia and the European Union should do is work in tandem to quickly draw up international rules for the use of digital technologies and the internet. The rules should be designed to build a "common digital space" shared by like-minded countries, one that limits government intervention and monitoring.

AI, like any technology, is politically neutral: It can be a tool for promoting democracy or a means by which dictators suppress people. It all depends on how it is used. The democratic world needs to work hard to prevent the spread of AI-powered autocracy.