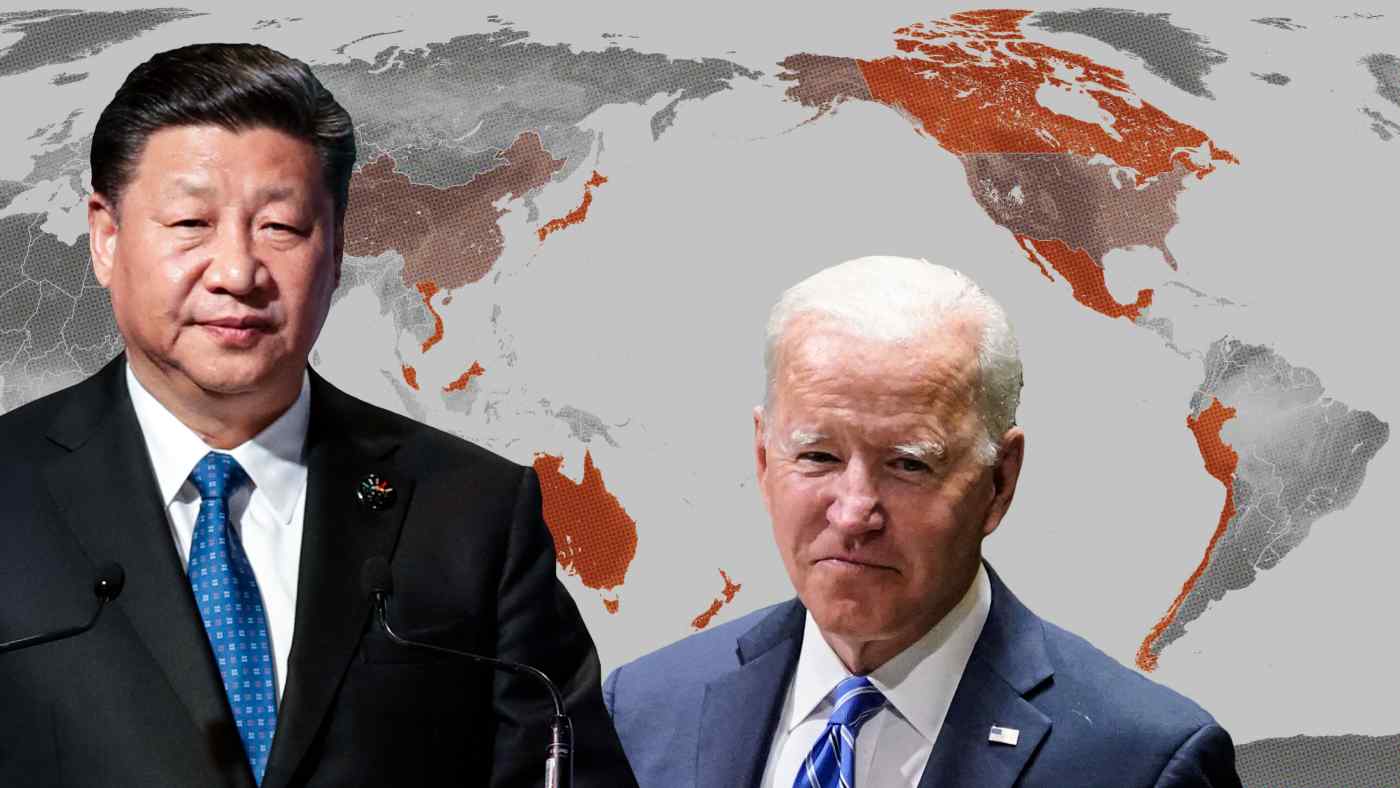 TOKYO -- In September, China and Taiwan applied to join the Comprehensive and Progressive Agreement for Trans-Pacific Partnership, a regional trade accord formerly known as the TPP. Taiwan's application came on the heels of China's move.

How the group of 11 Asia-Pacific countries responds to China's bid for CPTPP membership will have huge strategic implications not just for the region but also for the entire world.

The CPTPP is not just an economic framework simply for setting new terms of trade and business among member nations. The CPTPP was originally designed to establish highly transparent rules for trade and data flows within the bloc as a rule-making alliance led by countries like the U.S. and Japan and to put pressure on China to accept such rules.

But the fate of the trade pact has changed drastically. As soon as he took the office in the White House, President Donald Trump delivered on a campaign promise and abandoned the trade deal. Eleven nations, therefore, signed the pact without the world's largest economy and the accord came into force at the end of 2018. Trump's successor, Joe Biden, has also been unwilling to push for Washington's return to the pact.

Beijing has seen the absence of America as a great strategic opening, and last month made its move to take advantage of that. Clearly, its aim is to transform the accord into an economic zone with China at the center.

How should CPTPP member nations respond to China's move? There are two warring opinions among policymakers and experts. 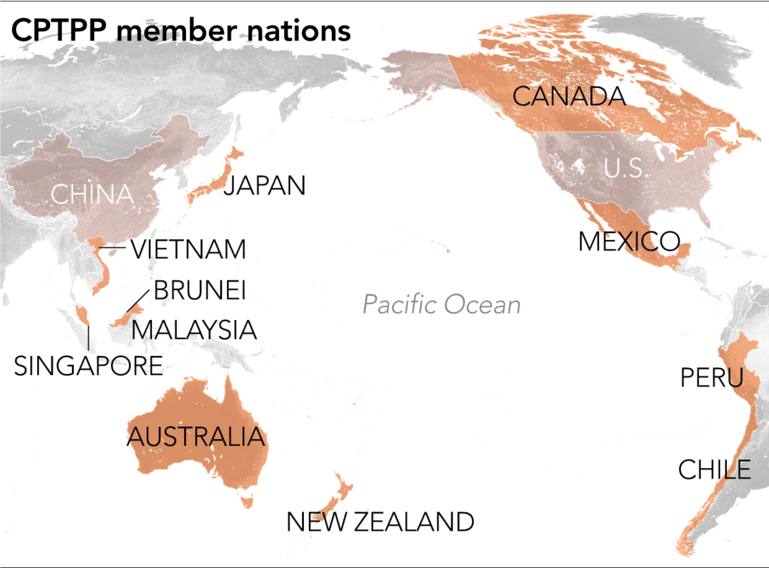 One is to proactively support China's membership talks. To join the CPTPP, China needs to take steps to harmonize its policies and regulations to the standards set by the agreement, such as easing its regulations on cross-border flows of data, scrapping its policy of helping state-owned enterprises through government procurement and state subsidies, and banning forced labor.

Proponents of Beijing's participation argue that CPTPP membership would press China to push through these policy and regulatory reforms and thereby act as a catalyst for radical changes.

The second group of policymakers and experts, including this author, oppose such an idea. They point out that China would demand special exceptions to certain CPTPP rules, since it would be very difficult for the country to meet all the standards set by the agreement. By accepting any such exception, the bloc will not be bringing China closer to CPTPP standards, but will, in fact, push the accord toward a Beijing standard.

Beyond that, there is a stronger case for not allowing China in. A country is allowed to join the pact only when all members agree to let it in. If China becomes a member before Taiwan and the U.S., Beijing would be able to veto their applications.

Washington would be forever be excluded while China reshaped the CPTPP into a powerful instrument for its strategic ambitions in the Asia-Pacific region. The area's supply chains would be integrated into China's huge ecosystem, which would dominate the regional economic landscape, in line with Beijing's national strategy.

China's entry into the bloc would also have an immeasurable impact on the region's security environment. In April 2015, then-U.S. Defense Secretary Ash Carter, in a speech at the McCain Institute at Arizona State University on "the next phase" of the U.S. rebalance to the Asia-Pacific, stressed the strategic value of the trade accord, saying, "Passing TPP is as important to me as another aircraft carrier."

In other words, allowing China to take control of CPTPP would cause the U.S. a tremendous strategic loss, larger than the loss of an aircraft carrier for the former defense secretary.

After applying to enter the trade group on Sept. 16, China wasted no time in starting a diplomatic offensive for its bid. President Xi Jinping, Foreign Minister Wang Yi and senior officials at the Ministry of Commerce made phone calls to top policymakers in five of the 11 CPTPP members.

The offensive reportedly earned Beijing the support of Brunei, Mexico and New Zealand for its attempt to elbow its way into the club. There is no doubt that the Chinese government is stepping up the lobbying campaign to win the backing of CPTPP members for the start of formal membership negotiations. 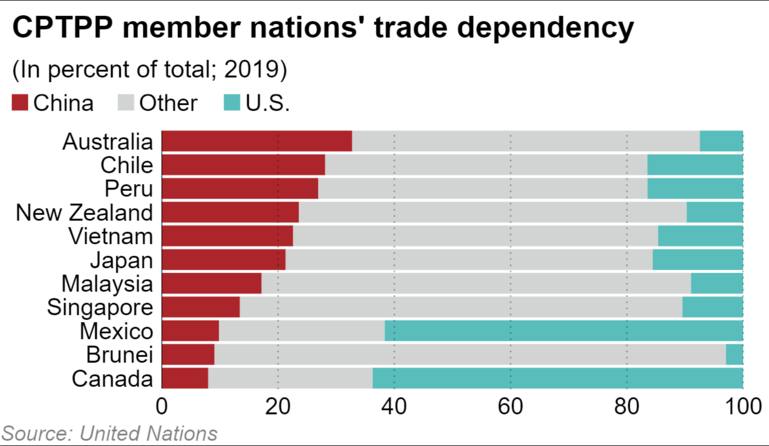 One of sources involved in the matter warns that it is only a matter of time before all the CPTPP members except those wary of China, like Japan, Australia and Canada, will be won over.

Formal talks over a country's application for membership do not begin without a full consensus among all the existing members. It is unlikely that this will happen for China anytime soon. But China is close to at least achieving what seems to be its initial goal: dividing the group and undermining the bloc's role as a bulwark against its growing regional influence.

What should be done to stop the rule-based trade bloc from drifting? In my previous commentary published Sept. 24, I argued that CPTPP members should first focus on encouraging the U.S. to come back, not on rushing toward negotiations with China. I received many comments supporting my argument, but some critics pointed out that Washington's return to the pact is unimaginable.

To be sure, even if Biden wanted to bring the U.S. back into the agreement, his administration would face a raft of big political obstacles. According to a source close to the administration, staunch opponents include not only Trump supporters but also leftist Democrats close to labor unions, who both see any free trade pacts as symbols of American job losses overseas.

That is not to say there is no hope. During the so-called Quad meeting of the leaders of Japan, the U.S., Australia and India on Sept. 24, then-Prime Minister Yoshihide Suga urged Biden to bring the U.S. back in. Though he did not make any commitment, Biden responded by saying he "will think" about the implications of China's application, according to a source in Japanese government.

U.S. Secretary of State Antony Blinken made a similar response to the same request from his Japanese counterpart, Toshimitsu Motegi, during their meeting on Sept. 22.

Matthew Goodman, senior vice president for economics at the Center for Strategic and International Studies, a U.S. think tank, does not rule out the possibility of Washington rejoining the group.

"It is still possible that the U.S. will return to the TPP. China's application will give Biden a chance to face the TPP issue seriously and reconsider his options," Goodman said. "For example, at [the] Asian Pacific Economic Cooperation Conference (APEC) in November, it could be possible for Biden to signal interest in returning to the TPP and mention the conditions for that."

Even if Biden decided to move in that direction, however, he would demand renegotiations to insert provisions designed to placate worried American workers who are against the deal. Such renegotiations would most probably take a long time.

This prospect makes it all the more important for the CPTPP members to avoid making any hasty moves to accelerate the process of China's entry into the pact, which should remain a bastion and promoter of fair and transparent rules of trade and investment in the region.