China's gains in Myanmar divert US attention from human rights BANGKOK -- The U.S. seems to be punching Myanmar with one hand while extending another for a handshake.

For five days, starting on Sept. 2, the U.S. Navy conducted its first joint military drills with Association of Southeast Asian Nations forces, including Myanmar's military. The U.S. initiated the exercise.

Only a month and a half earlier, the American government prohibited Min Aung Hlaing, Myanmar's commander in chief, and other high-ranking military officials from entering the U.S. due to "their involvement in gross violations of human rights." Yet, it did not stop Myanmar's navy from participating in the drills and welcomed its frigates.

What explains this seemingly inconsistent policy? In a word, China.

The current U.S. diplomatic approach stands in contrast to its stern policy against Myanmar's old military regime. The U.S. strongly opposed the junta's treatment of pro-democracy leader and Nobel Peace Prize laureate Aung San Suu Kyi, who was confined under house arrest three times for a total of 15 years. In 1997, Washington imposed tough economic sanctions on the country, prohibiting American companies from making new investments. Sanctions were expanded in 2003, not allowing U.S. firms to trade or engage in any financial dealings there.

It was only after President Thein Sein took office in March 2011 that the U.S. gradually eased the restrictions, in response to Myanmar's progress on democratization. Washington lifted all the sanctions in 2016, just after Suu Kyi became Myanmar's de facto leader.

Though Myanmar was once a British colony, the U.S. played a key role in restoring order in Asia after World War II and its pressure on the Southeast Asian country was consistent with its commitment to the basic principles of human rights and democracy. 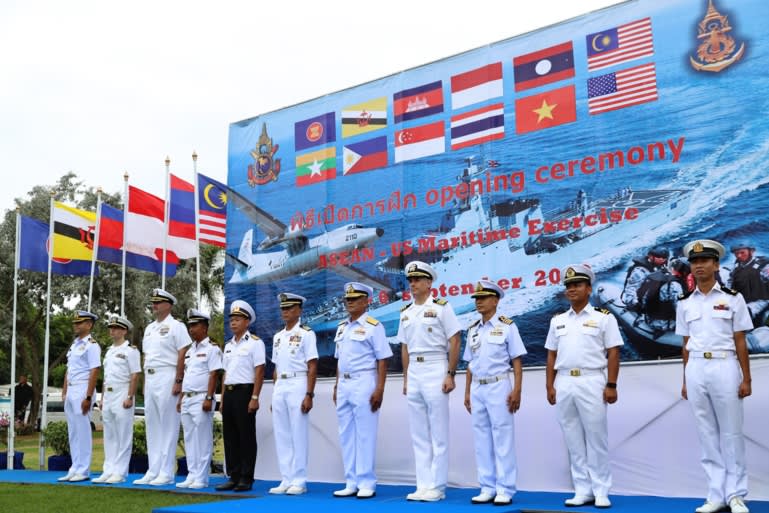 Myanmar's military participated in U.S.-ASEAN drills in Thailand in early September, even though some high-ranking officials are under sanctions. (Photo by Rie Ishii)

But not long after Suu Kyi's rise to power, Myanmar sparked another humanitarian controversy.

In August 2017, police stations were attacked by an armed group. The government concluded the attacks were the work of Rohingya Muslim extremists and launched a crackdown on the minority. More than 700,000 Rohingyas fled the violence to neighboring Bangladesh.

In a report issued in September 2018, the United Nations found that Myanmar's army and police had indiscriminately attacked civilians including children, and raised suspicions of "genocidal intent." The U.S. also concluded that Myanmar's commander in chief had been involved in the atrocities and imposed new sanctions.

When they met in Singapore last November, on the sidelines of the East Asia summit, U.S. Vice President Mike Pence told Suu Kyi that the plight of the Rohingya was inexcusable. The EU, for its part, is considering revising preferential customs duties on imports from Myanmar.

Nevertheless, at a time when it would seem natural to toughen sanctions on Myanmar, the U.S. held an investment seminar in Yangon with Japan on Aug. 20. Suu Kyi attended, and Scot Marciel, the U.S. ambassador to Myanmar, declared that American companies were keen to enter the country.

This, coupled with the military cooperation, suggests the U.S. wants to pull Myanmar into its orbit despite the concerns over human rights. A major difference between now and 1997 is that security issues concerning China carry much more weight. Rohingya refugees pray at a gathering held to mark the second anniversary of their exodus from Myanmar on Aug. 25 in Cox’s Bazar, Bangladesh.   © Reuters

It was China that supported Myanmar when it was under Western sanctions for roughly two decades. China helped build power stations and roads across the country and invested in development of natural resources. Beijing also supported the relocation of Myanmar's capital from coastal Yangon to inland Naypyitaw -- a change rumored to have been made to prepare for a possible U.S. Marine Corps invasion. China backed a range of infrastructure for the new capital, including a gigantic parliament building, an international airport and a 20-lane major road, which could be used as a runway in emergencies.

Throughout all this, although it was aware of China's increasing influence, the U.S. still prioritized Myanmar's democratization.

But from the U.S. perspective, the Chinese security threat has reached the point where it must take precedence.

In particular, the U.S. is warily eyeing a port China is developing in Myanmar's state of Rakhine -- the origin of the Rohingya crisis. The port is called Kyaukpyu, and it features a natural harbor facing the Indian Ocean that is well-suited for large ships.

Two oil and natural gas pipelines, running a total length of 870 km, already connect Kyaukpyu with China's Yunnan Province -- part of Beijing's Belt and Road Initiative. The two countries have also agreed to develop a China-Myanmar economic corridor, in which highways and railways will be built along the pipelines, and designate a special economic zone near the port.

"The U.S. likely fears Kyaukpyu will be another Hambantota," said one ASEAN diplomatic official.

In 2017, China obtained a 99-year lease on the Sri Lankan port of Hambantota in exchange for debt relief. Critics argued that the deal demonstrated how the BRI can be a debt trap. A diplomatic source said "there are strong suspicions the port is already being used for military purposes," such as refueling China's warships and other vessels. 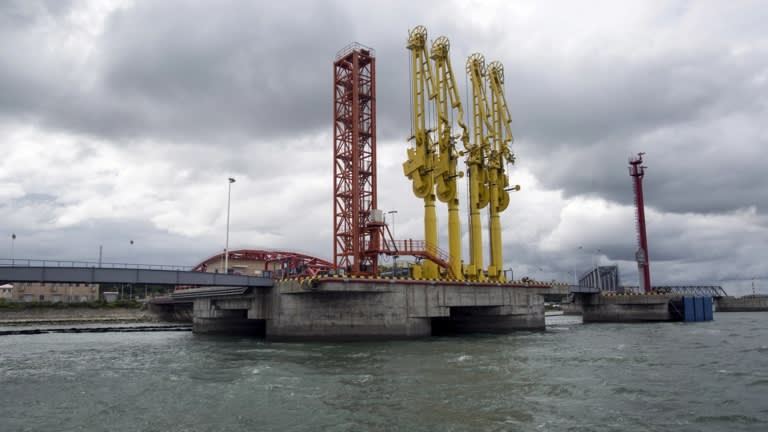 Sri Lanka is not the only example. In Pakistan, China obtained a 43-year lease on the southwestern port of Gwadar in 2015. Including Kyaukpyu, three strategically important ports could soon be in Chinese hands.

This comes as the U.S. faces off with Iran, calling for a coalition of the willing to ensure security in the Strait of Hormuz. But even if oil tankers safely ply the strait, they could be under constant threat from Chinese submarines in the Indian Ocean.

Since the start of the Rohingya refugee crisis two years ago, China has only increased its influence in Myanmar while the U.S. and Europe held back. "It gives me the impression that China is backing up Myanmar to make it more isolated, rather than helping it solve the Rohingya issue," one aid official said.

This explains the U.S. reluctance to act more forcefully on the Rohingya. Washington's human rights advocacy opens it up to accusations of double-tongued diplomacy, but the Myanmar situation is yet another sign of how China's growing presence is raising U.S. alarm bells.

Officials from the U.S. Department of Defense and the Central Intelligence Agency are said to be making frequent visits to Myanmar lately. But the country poses unique challenges for American strategists, compared with Sri Lanka and Pakistan. Until recently, the U.S. had almost no diplomatic ties with Myanmar, leaving it largely in the dark.

Japan, on the other hand, has a clearer view. Tokyo has maintained relations with Myanmar, refraining from hitting the country with sanctions like those enacted by the U.S. and Europe. Shortly after the transfer of power to a civilian government, Japan resumed yen loans.

The U.S. appears to be hoping its ally Japan -- which shares its Indo-Pacific strategy and joined the Yangon investment seminar last month -- can be a guiding light.