Since it entered the World Trade Organization almost 20 years ago, China has been the fastest-growing economy on the planet, in large part thanks to its exporting prowess and its vital role in global supply chains.

Apple employs a million people in China; driving across the Baosteel metallurgical plant takes a half an hour. No other country can replicate China's scale or its manufacturing ecosystem.

For example, in 2007, a mere six years after joining the WTO, the mainland's current account surplus reached a peak of 9.9% of gross domestic product as it sold far more to the rest of the world than it purchased from it.

However, that surplus has been coming down rapidly since 2015, and in 2018 amounted to a mere 0.5% of GDP. Moreover, this year will likely be the first full year that China is expected to actually run a (small) deficit on its current account since it entered the WTO in 2001. Indeed, JP Morgan's chief China economist Haibin Zhu expects the deficit this year to amount to some 0.3% of total output.

That shift from a net capital exporter to a net debtor will have profound implications for the world economy, foreign companies that invest in China and companies that sell to China as well as investors in the Chinese currency, its bond markets and its equity market. 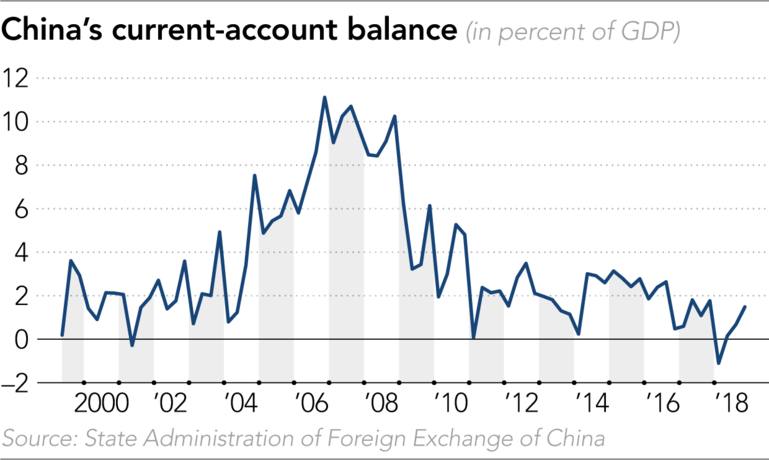 "China will need to increasingly rely on domestic demand while, China's role in the global economy will shift from supply side (as the biggest exporter) to the demand side as one of the fastest expanding consumption markets," say economists at JPMorgan led by Zhu in a report entitled "Made in China 2025: A New World Order?" Indeed, already "China appears to have become less connected to the rest of the world over the past half-decade... as China turns inward with increased consumer service sector spending that shifts the composition of growth away from imported goods and commodities."

The electronics and hardware manufacturing supply chain the country has built over the last two decades will be left behind as China moves to embrace value-added services for its ever-wealthier population, especially in areas such as health care.

Services tend intrinsically to be locally provided. Meanwhile, the adjustment away from resource- and commodity-intensive growth will be especially brutal for those countries and companies that were beneficiaries of China's investment-intensive growth of the past 20 years. As the sources of growth both slow and shift, base metals prices could fall 40% to 60% from current levels, the report warns. That will be bad news for countries and mining groups from Australia to Chile.

In other words, countries that will be hurt by declining orders for say iron, may have to transform their mines into tourist attractions if they are to offset the loss of metals orders -- and cater instead to the hunger of Chinese tourists to see the world,

And while much has been made of upgrading the housing stock as the standard of living rises, that source of support is likely to matter less than the fact that the population is aging more quickly than it is growing wealthier. That in turn will ultimately put downward pressure on residential property, and push down prices by as much 40% from current levels.

In addition, the structural changes in the mainland economy will soon change the nature of the country's financial markets hastening the development of these overwhelmingly domestic and still small markets. That in turn will lead to more inflows -- as will the inclusion of both equity and debt in global indices.

Today, offshore investors are almost irrelevant players in both the bond and equity markets of China, accounting for a mere 2.3% of onshore shares and bonds, currently worth $430 billion, according to data from JPMorgan. "The bond market has a limited ability to produce assets foreigners can hold," says Chen Long of GaveKal, a research boutique with offices in Beijing and Hong Kong.

At the same time, China pays out more to foreign investors in China ($290 billion) than it earns on external assets, ($260 billion), according to data from GaveKal. Moreover, the country has had a deficit on its services account for a while largely due to the rising penchant of Chinese people to travel abroad. "Tourism services first swung to a deficit in 2009, and since then the deficit has risen every year and is on pace to reach about $230 billion," the firm notes.

In addition, the appreciation of the Chinese currency from 2000 to 2017, when it rose over 20% is also likely a thing of the past, in part precisely because of Beijing's desire to stem that appreciation and in part because of the declining surplus in its balance of payments. 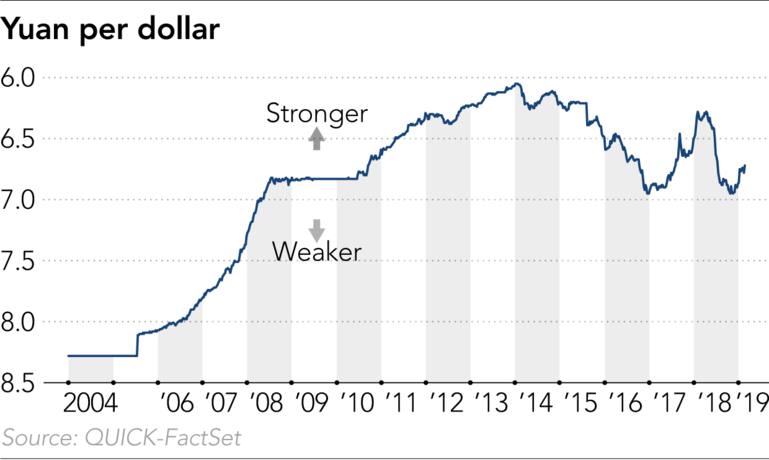 Since mid-2015, the paranoia about losing control of its currency and the prospect of massive capital outflows has slowed or even reversed the process of the liberalization of capital controls on the yuan. The yuan is less widely used today for trade settlement than a few years ago, the issuance of local currency bonds has dropped and while the place of the currency in the foreign exchange reserves of a few countries including Russia has risen, the number is still laughably small give the size of the mainland economy.

Still the new status of China as a savings deficit economy means that eventually China will be developing the prerequisites and laying the groundwork for the yuan to one day take its place as the only real contender to challenge the status of the U.S. dollar as the only reserve currency, with all the advantages that status confers. That is because an attractive deep financial market is necessary for any currency to be widely held by foreign investors.

The debt market, the world's third largest now, with a size of $12 trillion, "is too big to ignore," say the economists of JPMogan, adding that following the inclusion of sovereign debt in major fixed income indices, inflows could amount to some $300 billion, while they expect a total of $115 billion inflows to the A-share market following inclusion of China in the FTSE Emerging Index.