China unlikely to emerge as leader of post-coronavirus world 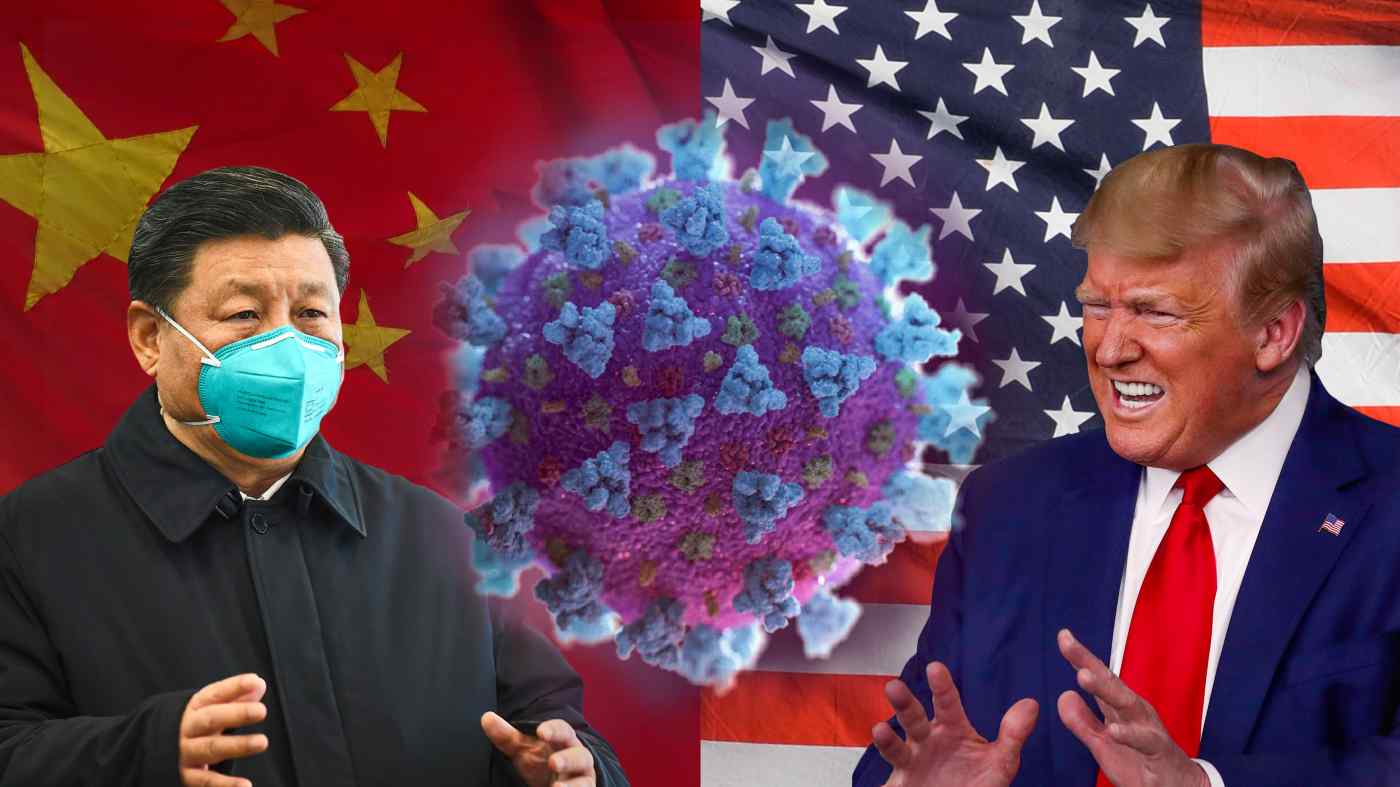 A debate is raging among scholars of international relations over whether China or the U.S. will emerge stronger in the wake of the coronavirus pandemic (Nikkei montage/Source photo by Xinhua/AP and Reuters)
HIROYUKI AKITA, Nikkei commentatorApril 14, 2020 12:46 JST | China
CopyCopied

TOKYO -- As the novel coronavirus spreads across the world like wildfire, there is no doubt the pandemic will affect the global order, the question is how.

Scholars in the U.S. and Europe are discussing the topic online daily, particularly the impact of the outbreak on the U.S.-China strategic contest over the world leadership.

Experts point to three possibilities. The first is a further decline of the U.S. as de facto world leader and a shift in the balance of power toward China. This scenario envisions China successfully containing the epidemic -- at least on the surface -- and using that as an opportunity to offer aid to other countries suffering from the outbreak.

Meanwhile, the U.S. and Europe will continue to struggle to find an effective containment strategy, exposing their domestic political weakness, putting China is a favorable light on the world stage and setting it up to assert global leadership.

The second scenario, conversely, predicts China's global influence will wane in a post-coronavirus world. Advocates of this view point out that China suffered a tremendous loss of trust in the global community for allowing the coronavirus to spread. Public sentiment in China toward the central government has soured due to its failure to deal swiftly with the crisis, they argue, dimming China's prospects for global leadership.

The third scenario lies somewhere in between. It posits that both China and the U.S. have been greatly harmed by the disaster, driving them to focus more on domestic affairs. This will create a "Group of Zero" world -- a global order without a clear leader.

The second scenario seems most likely, though a G-0 world is possible, depending on how badly the U.S. suffers from the crisis. A world in which China emerges from the pandemic as global leader seems highly unlikely.

The main reason is that China will not be able to avoid blame for its failure to contain the initial outbreak. Although the first infections were discovered in the central city of Wuhan as early as last December, Beijing failed to act quickly. Instead, local officials attempted to cover up the outbreak. On top of that, Beijing initially said the virus showed no signs of human-to-human transmission.

Although countries are busy battling to save their citizens from the deadly virus at the moment, demands that China to take responsibility for the outbreak may rise once it is under control. On April 6, National Review, a conservative opinion magazine, published an article titled "How to Make China Pay," suggesting the U.S. should demand that Beijing pay compensation for financial losses stemming from the coronavirus outbreak. Meanwhile, the Henry Jackson Society, a British think tank, on April 5 estimated the costs to the G-7 attributable to Beijing's coronavirus blunders at 3.2 trillion pounds ($3.99 trillion).

Meanwhile, Beijing has begun a global public relations campaign arguing that the international community should thank China for quickly containing the virus, thereby buying time for other countries to deal with the outbreak. In line with this effort, Beijing is offering more medical assistance overseas, providing masks and ventilators to around 120 countries as of the end of March. Serbia and Italy, two of the recipients, have expressed gratitude for China's help. "This does not mean the anger toward China for causing the global outbreak will disappear," however, according to a diplomatic source in Europe.

The economic damage from coronavirus is also a blow to China's global ambitions. It has poured vast sums into infrastructure projects in Asia and Africa under its Belt and Road Initiative. The goal is to create a vast economic sphere of influence, increasing its global stature.

According to the U.S. Council on Foreign Relations, however, the initiative appears to have hit a wall in countries such as Pakistan, Indonesia, Malaysia and Myanmar. The virus has stalled the flow of Chinese laborers and construction materials to project sites.

The U.S. is also laboring under the political and economic costs of the outbreak. Some expect the U.S. economy to shrink by double digits in the April to June quarter, which would be its worst contraction of the postwar era. Vast numbers of Americans have lost their jobs as much of the economy comes to a standstill.

The $2 trillion stimulus package recently passed by Congress will greatly expand the federal budget deficit, which expected to exceed 10% of the country's gross domestic product. That could force huge cuts in military spending and lead to a U.S. military retreat around the world. The U.S. Navy estimates that it needs 355 ships to maintain dominance over rivals such as China and Russia. But budget constraints might leave it unable to maintain more than 305 to 310 ships.

The Trump administration's lack of an effective virus containment strategy has led to more than 21,000 deaths in the U.S., which is likely to damage its international credibility. The political divide in the U.S. remains wide, leaving it little capacity to assert world leadership.

The key question is which of the superpowers will suffer more from the pandemic in the long run. In terms of political influence, China looks likely to suffer more. The U.S. has democratic allies such as Japan, South Korea, Australia and the European countries to help it in times of difficulty. This, in turn, helps Washington maintain global power. China, on the other hand, has some friends, but few reliable allies.

In addition, the U.S. is more adept at overcoming crises. Once the pandemic ends, Congress and numerous research institutions will surely study the mistakes the U.S. made in its virus containment strategy. And even if Donald Trump loses the November presidential election as a result, the U.S. government will remain stable. The lessons learned will be applied by the next administration.

Correcting errors is not Beijing's forte. Open discussion and analysis of past mistakes is hard under Xi Jinping's iron-fisted rule because acknowledging that the central government stumbled would undermine Xi's power. The international community should not fret about a China-led global order; it should be more concerned that the pandemic may threaten stability in China.