Chinese Communist Party has lessons to keep from fallen dynasties An image of Chinese President Xi Jinping at the Museum of the Chinese Communist Party, which opened in June ahead of the 100th anniversary of the party's founding.
HIROYUKI AKITA, Nikkei commentatorJuly 2, 2021 19:21 JST | China
CopyCopied

TOKYO -- I vividly remember a scene in the small hours in Beijing on Feb. 20, 1997. Assigned to the capital of China, I was in front of the 301 Hospital, a military hospital located at the southern edge of the city.

A medical ward for top Chinese officials was under heavy guard and being outlined with bluish white lights just after strongman Deng Xiaoping, known as "China's last emperor," died in a room there.

With a sense of anxiety, I wondered where China would head without its general architect. Deng's death was officially announced roughly an hour and a half later.

The anxiety was unnecessary because successors to Deng followed his "reform and opening-up" policy, which led to China's rapid development.

But Deng, up in the sky, must be worried, rather than relieved, by the current state of affairs because instructions left by him are about to be abandoned now that the Chinese Communist Party celebrates its 100th anniversary this month. 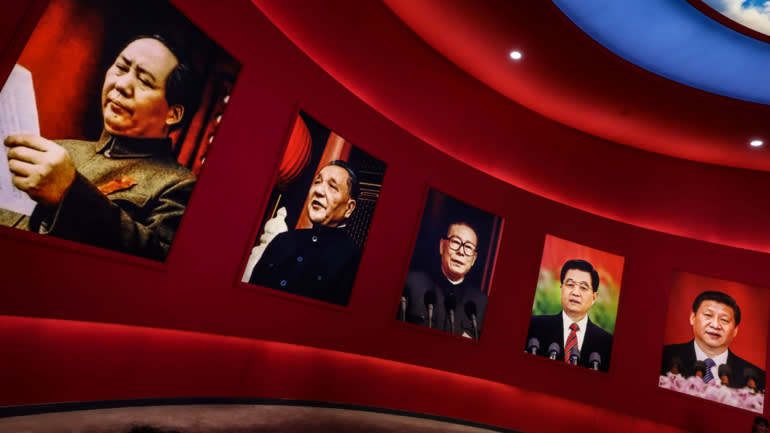 In his final years, Deng told future leaders that China should increase mutual trust, reduce trouble, promote cooperation and avoid confrontation with the U.S. He repeatedly urged them to follow his instructions.

Based on his experience of surviving the civil war and a series of power struggles, Deng was aware of risks resulting from China's precarious confrontation with the U.S.

Jiang Zemin followed Deng's instructions and strengthened China's relations with the U.S., resulting in a strategic partnership agreement between Beijing and Washington under the administration of President Bill Clinton. Hu Jintao, who succeeded Jiang, moderately toughened China's foreign policy in the latter half of his term but avoided confrontation with the U.S.

But President Xi Jinping is leading China in the opposite direction, challenging the U.S.-led order and sending the bilateral relationship into a tailspin. In Washington, views that not only take issue with China's words and deeds but also regard the party's regime itself with hostility have been growing since last year. Mike Pompeo and Mike Pence, then the U.S. secretary of state and vice president, in 2019.   © Reuters

Such a U.S. stance was manifested by Mike Pence, who served as vice president under President Donald Trump, and Mike Pompeo, secretary of state for the former president. In their foreign policy speeches, both Pence and Pompeo lashed out at the CCP in a manner then seen as unusually harsh.

"China not only violates its own people's human rights and intimidates neighboring countries, but also interferes in the U.S. political system through spying, cyberoperations and information warfare," Mary Kissel, former senior adviser to Pompeo, said.

"Secretary Pompeo, who also served as CIA director, came to believe that the underlying problem was the nature of the Communist Party regime itself," she added.

China has come to confront its neighbors as well as Australia and Europe and has become isolated as a result of its hawkish language and behavior.

China could better expand its sphere of influence by hiding its claws and cooperating with other countries. But what is driving the Xi government to pursue China's hasty growth to superpower status by making enemies of other countries?

Two hypotheses circulate among government officials and intellectuals in major countries. One sees China as becoming overly self-confident on the back of its increased national power.

The economic models of the U.S. and Europe showed weakness and fragility in the global financial crisis of 2008. The governance of democracies is being tested by the COVID-19 pandemic. Xi thus seems to have become more confident, believing that the time has come at last to change the U.S.-led order.

The other hypothesis presupposes the opposite reason. Xi's hard-line stance comes out of fear that China, if it drops its guard, would face the same fate as the Soviet Union, which collapsed in 1991. President Xi Jinping speaks during a celebration marking the 100th anniversary of the founding of the Chinese Communist Party in Beijing on July 2.   © Xinhua/Kyodo

In China, the gap between rich and poor has widened, while friction with ethnic minorities is increasing. Discontent about unemployment is also swirling. To prevent such flash points from shaking its regime, China has tightened control over Hong Kong, the Uyghurs and Chinese society in general, and also taken a hard-line stance in external relations, according to the second hypothesis.

While one may wonder which of the two hypotheses is closer to the truth, it is fair to say that both are correct.

China, if likened to a human, is close to a state of excessive self-confidence with a simultaneous anxiety disorder. There is a high risk, thus, of China resorting to reckless behavior. The risk will likely further increase in the future.

A matter of special concern is China's dwindling birthrate and aging population. The total population of China has been forecast to begin to decrease as early as in 2022 because the proportion of those who are 65 years old or older has reached 13.5%.

The CCP has been able to have the public on its side by raising the living standard of people in China thanks to Deng's "reform and opening-up" policy. The legitimacy of the party could be shaken if the growth of affluence stalls.

China has had no everlasting dynasty in its history. How long, then, will the dynasty of the CCP last?

"Making excellent use of digital and high technology, the CCP has equipment unavailable to past dynasties. It is rock-solid at present, and I don't think it has entered old age," said Takashi Okamoto, a professor at Kyoto Prefectural University and expert on the history of China.

Okamoto pointed out that the strengths and weaknesses of the Xi government has some similarity with those of the Ming dynasty. "The Ming dynasty implemented domestic control and contained opposing opinions by a closed-door policy and Sinocentrism," Okamoto said. "In its closing days (from the late 16th century till the early 17th century), popular backlashes successively occurred and weakened its governance."

The Ming dynasty collapsed in 1644 after ruling for around 300 years. The following Qing dynasty eased its grip and allowed foreign powers to penetrate into China, and ceased to exist in the early 20th century.

Xi sees Qing as an example of bad governance. But he well may be keeping lessons from Ming in mind.