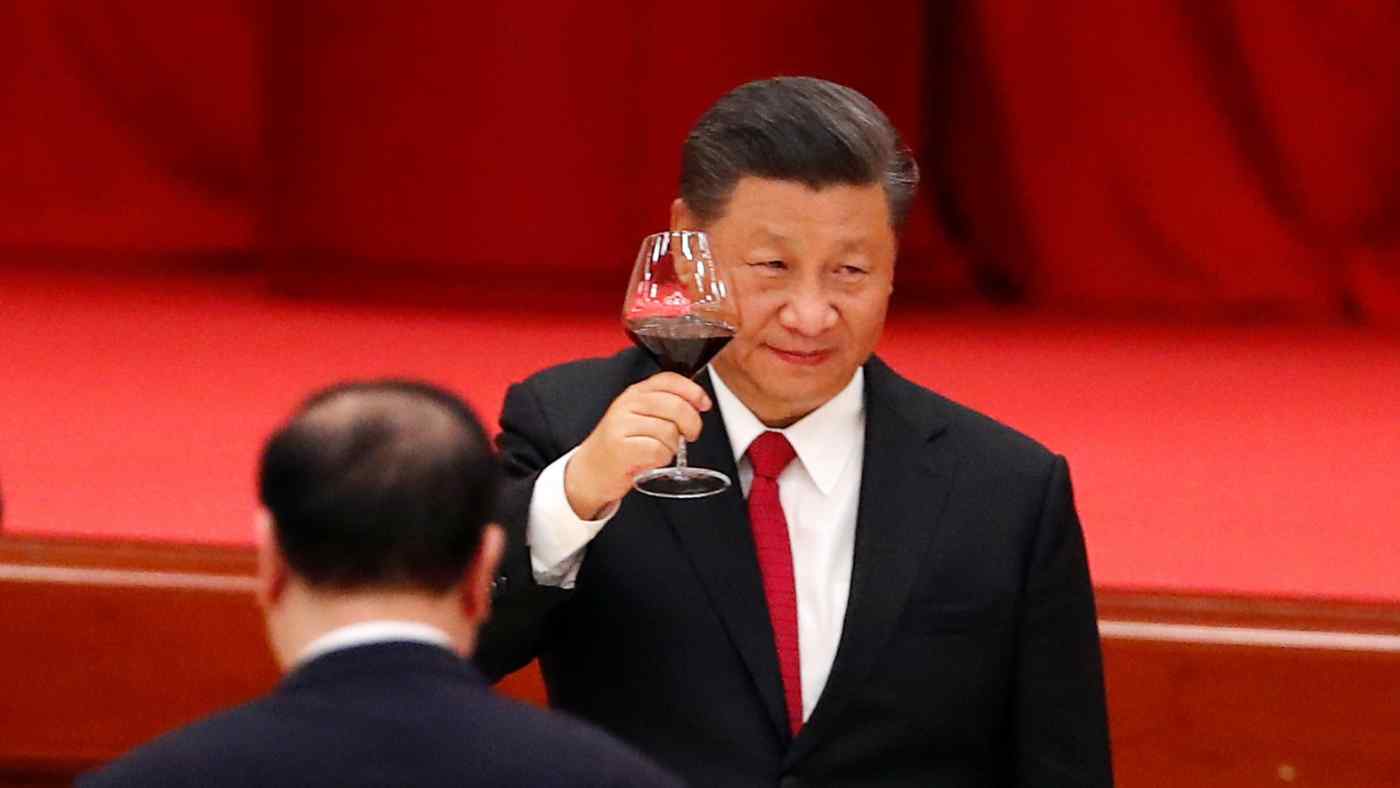 BEIJING -- The Communist Party of China will commemorate its 100th anniversary in July, as the country largely succeeds in containing the coronavirus and experiences a robust economic recovery.

But congratulatory remarks are hardly being heard from the rest of the world -- the CPC under the leadership of General Secretary Xi Jinping is reinforcing its one-party rule even at the risk of friction with foreign governments.

The atmosphere in the Huairen Hall in Zhongnanhai, a former imperial garden in Beijing where top CPC leaders have their offices, was filled with tension on Dec. 24 and 25 when Xi, who also serves as president of China, gathered the CPC's 25 Politburo members there for a "Democratic Life Meeting" session.

Such a meeting is not an occasion for party cadres to discuss problems in daily life in a democratic manner. It is a rather a gathering where participants criticize themselves as well as their superiors and colleagues and reportedly started by Mao Zedong to expose his political foes.

Since taking the reins of China in 2012, Xi has placed emphasis on the meeting. The theme of the latest session was to "earnestly learn the thought of unique socialism in China in the new age of Xi Jinping."

State-controlled China Central Television aired each of the 25 Politburo members reporting to Xi. They must have pledged fidelity to him.

It was likely no coincidence that on the first day of the meeting, the State Administration for Market Regulation, China's antimonopoly watchdog, began an investigation into Chinese electronic commerce giant Alibaba Group.

A planned initial public offering in Shanghai and Hong Kong in November by Ant Group, a financial company under the wings of Alibaba, was suspended by Chinese authorities. The CPC is striving to put Alibaba at bay.

The party's move was allegedly triggered by Alibaba founder Jack Ma's remark in October last year that "excellent innovation isn't scared of law." Xi may have taken the statement as a challenge to himself and the CPC and decided that Ma has become too influential to be left unchecked.

The tough stance came after the CPC got off to a rough start in 2020.

The outbreak of the coronavirus in the city of Wuhan in Hubei Province in January forced the Chinese leadership into an unprecedented predicament as its strict gag rule imposed over the spread caused a delay in addressing it and aroused criticism against the CPC's one-party control.

Subsequently, however, China has virtually contained the virus ahead of most other countries through the party's iron-fisted rule. The Chinese economy logged its first contraction in gross domestic product in the January-March period, but returned to growth in the following quarter.

China is believed to have achieved an economic expansion of around 2% in 2020 and is preparing to set a growth target of around 8% for 2021. With Japan, the U.S. and Europe continuing to struggle to pull out of the COVID-19 crisis, China appears to stand out as the sole winner.

The country will surpass the U.S. in terms of nominal GDP in 2028, according to a December forecast by the Japan Center for Economic Research. Before the pandemic, China had been expected to become the world's biggest economy in 2036 at the earliest. The change suggests that ironically, the pandemic, which started in China, is actually reinforcing the country's strength.

The 19th CPC Central Committee adopted a new strategy called "dual circulation" at its fifth plenary session in October last year. The strategy is Xi's blueprint for China's economic future, calling for domestic consumption to become the main pillar of the economy and reducing reliance on external demand. In other words, the strategy envisions a future global economy in which China does not rely on the world but the world cannot stand without China.

The strategy's purpose is crisply summarized in Xi's own words following the plenary session of the committee and carried by Qiushi, a political theory periodical published by the CPC. "We should increase the dependence of international supply chains on China and establish powerful retaliatory and menacing capabilities against foreign powers that would try to cut supplies," he said.

The new strategy was rolled out because Xi probably thinks that he can't rule out the possibility of the U.S. attempting to decouple its economy from China's even under the incoming presidential administration of Joe Biden.

At any rate, foreign governments are indeed casting a stern eye toward China.

With the forcible enactment of the Hong Kong national security law in June 2020, China has made titular the "one country, two systems" principle guaranteeing the special administrative region's high level of autonomy. Also, a large number of official Chinese ships continue entering Japanese territorial waters around the Senkaku Islands in Okinawa Prefecture, adding fuel to opposition among Japanese hard-liners to an as yet unrealized state visit by Xi to Japan planned before the coronavirus outbreak.

Meanwhile, a celebratory mood is growing in China ahead of the July 1 anniversary of the CPC's foundation.

The party's official records show that it opened its first congress in Shanghai on July 23, 1921. But the anniversary of foundation was set on July 1 because, according to a record, Mao merely remembered that the first party congress had been convened "in July" when the CPC decided on the date of the anniversary in the 1930s.

Coincidently, the postponed Tokyo Olympics is scheduled to open on July 23. On that day, what will be the state of relations between China and the rest of the world? If Xi pursues his policies with no fear of isolation, a further rise in tensions seems inevitable.