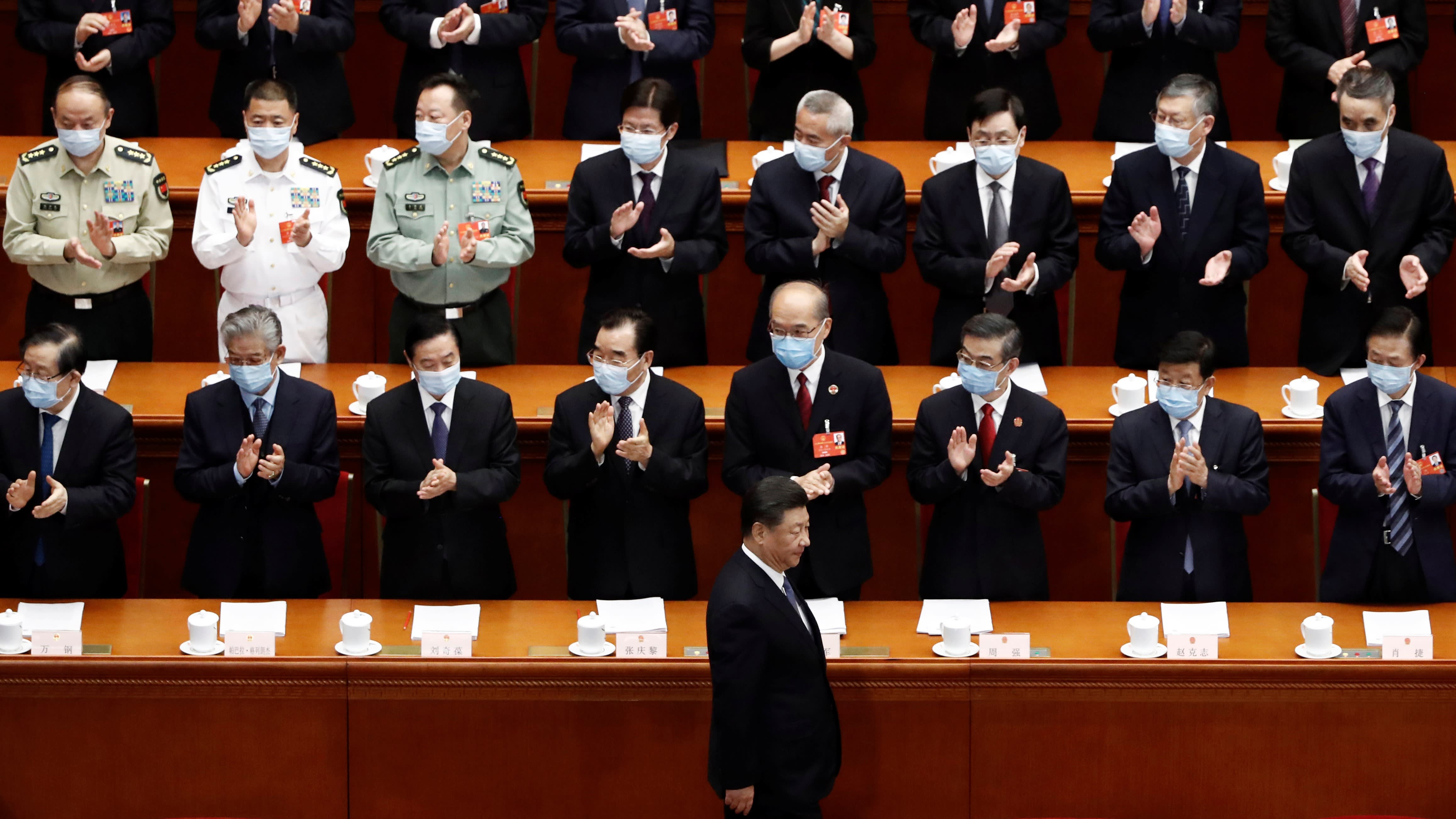 TOKYO -- The world economy has slowed amid the novel coronavirus pandemic, throwing a huge number of people out of work. People's anxieties and worries keep growing as economic conditions are unlikely to improve anytime soon.

The current situation threatens peace and security around the world. When political leaders find themselves in difficult domestic political positions, it is hard for them to be flexible in solving conflicts with other countries. Some might be tempted to get tough on other nations to avert domestic discontent.

"I think all of us realize that COVID-19 has not frozen any of these conflicts and in fact, may have catalyzed them," H.R. McMaster, former National Security Adviser to U.S. President Donald Trump, warned during an online meeting held by the Hudson Institute on Wednesday.

Antagonism between China and India over a border region including the Himalayas is a reflection of the situation described by McMaster.

Chinese and Indian troops clashed in Ladakh, a disputed region between the two countries, on June 15, causing deaths for the first time in 45 years in the conflict. Some 20 Indian soldiers and tens of Chinese were reported killed.

Although the nations have agreed to ease tensions in the area, the border conflict has lasted for more than half a century and frictions will likely remain. The world's two most populous countries possess nuclear weapons. As their border that runs thousands of kilometers has yet to be fixed since armed clashes in 1962, tensions have continued.

In 2013 and 2014, Chinese troops crossed the border just before visits by their country's leaders to India in 2013 and 2014. Further, Chinese and Indian troops engaged in an armed standoff at China's border with Bhutan in 2017, with the dangerous situation lasting for two and a half months.

While the latest clash in the border region was a result of long-lasting tensions, it was possibly also attributable to the pandemic.

According to former Indian senior military officials and diplomatic advisers, China is stepping up the offensive against other countries, including their own, while the world is caught up in dealing with the virus -- in what could be a possible attempt to divert growing domestic discontent in China.

The virus and the economic slowdown have sent China's unemployment rate, including farmers, up to an estimate of around 20%. There is also smoldering public discontent over authorities' delayed initial response to the virus due to an initial cover-up.

The experts from India thus agree that China is trying to avert domestic discontent while taking advantage of the country's preoccupation with tackling COVID-19.

Whether this is true or not, a crisis with a foreign country brings people together by stimulating patriotism. The number of views regarding border issues between China and India on Weibo, a Chinese social media platform, has topped 2 billion.

In a rare move, Indian Prime Minister Narendra Modi, who does not often speak out to the public, delivered a speech last Wednesday night following the clash with China, stressing that India would not budge on the territorial dispute.

Modi has become more alarmed by China in recent years and now believes that the territorial problem will not improve even if India compromises, according to a former Indian military official.

The prime minister is also in a predicament due to India's coronavirus-induced economic slowdown. A nationwide lockdown that started at the end of March caused a spike in the unemployment rate in urban areas, reaching 26% in May. Some 120 million workers are reportedly unemployed across the country.

An easing of the lockdown in June has triggered an explosion of infections. The number of deaths has reached some 13,000, which is making citizens anxious and irritated.

Under these circumstances, including their tough domestic situations, China and India are likely to enter a long period of confrontation without compromise.

India is, therefore, expected to review its China policy and take a tough stance. "Diplomatically, New Delhi will abandon the annual informal summit between Prime Minister Narendra Modi and Chinese leader Xi Jinping now [already] held twice," said Pramit Pal Chaudhuri, distinguished fellow at the Anata Aspen Centre. "It is also preparing to redouble its efforts to counter China in a number of multilateral fora and join multilateral moves against the Belt and Road Initiative," he added.

In any case, China's actions are enigmatic as they antagonize not only India but also other countries around the world.

China has dispatched official ships to the contiguous zone of the Senkaku Islands in the East China Sea for about 70 consecutive days since mid-April. The islands are administered by Japan but claimed by China. Also, last Thursday, a submarine, presumed to be Chinese, was spotted underwater near Amami-Oshima island in southern Kagoshima Prefecture.

China has also taken an aggressive verbal tone -- called "wolf warrior diplomacy" -- against the U.S., European countries and Australia as they are calling for an independent investigation into the origins of the COVID-19 outbreak.

Antagonism between the U.S. and China has already come close to a state of "New Cold War." It should be reasonable for China to ease tensions with India, Japan and Australia in order to decouple them from the U.S. But China has opted for an unwise stance that could shut itself off from the rest of the world.

What is prompting the Xi administration toward these actions, which are virtually akin to self-inflicted wounds? Experts on China point out three reasons.

First, as mentioned above, the country is trying to divert discontent among its citizens while going increasingly on the offensive against other countries by taking advantage of the spread of the coronavirus.

Second, there are cases in which China is carrying out hard line policies planned before the outbreak in a business-as-usual way. The dispatch of official ships near the Senkaku Islands and stepping up control over the South China Sea might be examples.

The most worrisome reason, however, is the third: Organizations in the Chinese government and military are competitively resorting to hard line measures in line with Xi's overall intentions for the sake of protecting themselves.

"Organizations in China are striving to secure budgets under severe fiscal conditions caused by the virus-triggered economic slump," said Akio Takahara, professor at the Graduate School of Public Policy at the University of Tokyo, who is an expert on Chinese politics.

The military and the foreign ministry are trying to highlight their relevance by assuming hawkish policies on the assumption that is what Xi prefers, he added.

Before 1945, the Japanese Imperial Army and Navy fiercely competed for budget allocations amid the rapid expansion of Japan's overseas interests, with such competition consequently increasing the country's external assertiveness. It seems that a similar situation is developing inside the Chinese military and government.

Recently, North Korea is increasing provocations against South Korea. North Korea is also reportedly in economic distress due to the closure of its border with China in January to contain the virus. It can be assumed that North Korea's hawkish tone is related to its dire economic straits.

The pandemic is not only claiming human lives but also spreading another virus, one that undermines peace. The world will become more dangerous if it does not contain such twin "infections."