As government pilots a tidal project, country focuses on catching up in renewables 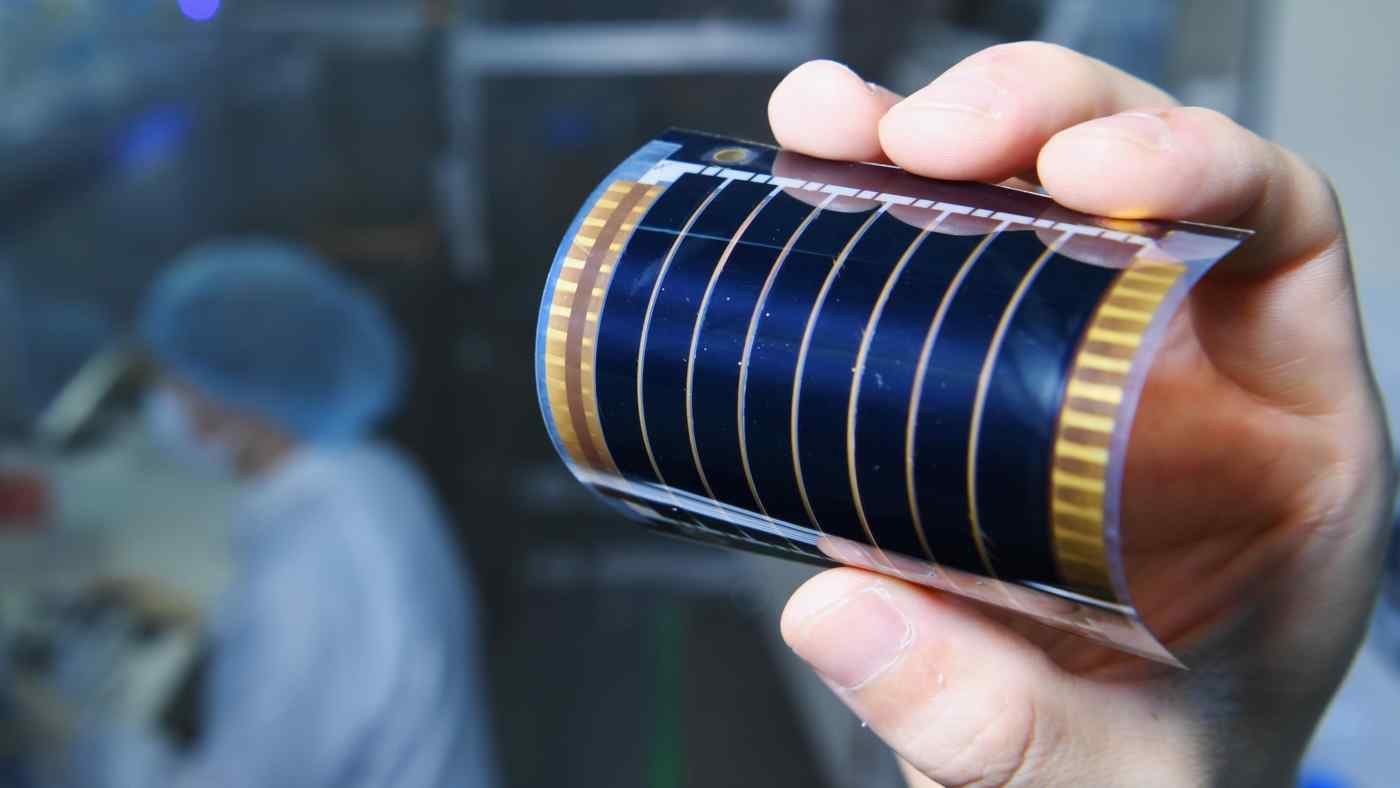 TOKYO/FUKUOKA -- Global demand for electricity is estimated to double by 2050 as countries race to build a zero-carbon future. With this expected surge in demand, the pressure is on to find alternative sources of energy and develop storage for those.

A perovskite solar cell harvests sunlight and is thin and transparent enough to coat machines and objects such as electric vehicles, vending machines, smartphones, clothes and curtains. This new solar cell could replace the existing crystalline silicon cells that dominate today's photovoltaic market.

Over the past decade, Toshiba has managed to increase the power conversion efficiency of its perovskite solar cells to 14.1%, the highest in the world. This compares just over 20% for conventional solar panels.

If perovskite solar cells become cheaper, they could be a vital technology for a carbon-neutral economy. "We could be able to install solar cells anywhere," said Kenji Todori, a senior expert at Toshiba.

A team of researchers at Stanford University said that if the manufacturing process of perovskite cells can be fine-tuned further, the average price of electricity generated this way could be dragged down to roughly 2 cents per kilowatt-hour. If this comes true, perovskite cells would be one of the cheapest sources of renewable energy.

But the creator of the perovskite cells, Tsutomu Miyasaka, professor at Toin University of Yokohama and a Nobel Prize in chemistry candidate, is not optimistic about the future of Japanese research in this field.

"In China, there are at least 10,000 researchers specializing in this technology, more than 10 times the number in Japan," he said. Despite being in the lead decades ago in the development of solar energy, Japanese manufacturers have now lost out to foreign rivals.

But Japan has now another focus -- tidal power. As an island, this is a plentiful source of energy for Japan. At the Goto Islands in the west of the country, where currents are fast and powerful, the Ministry of Environment and renewable energy producer Kyuden Mirai Energy are piloting Japan's first tidal power generation system. 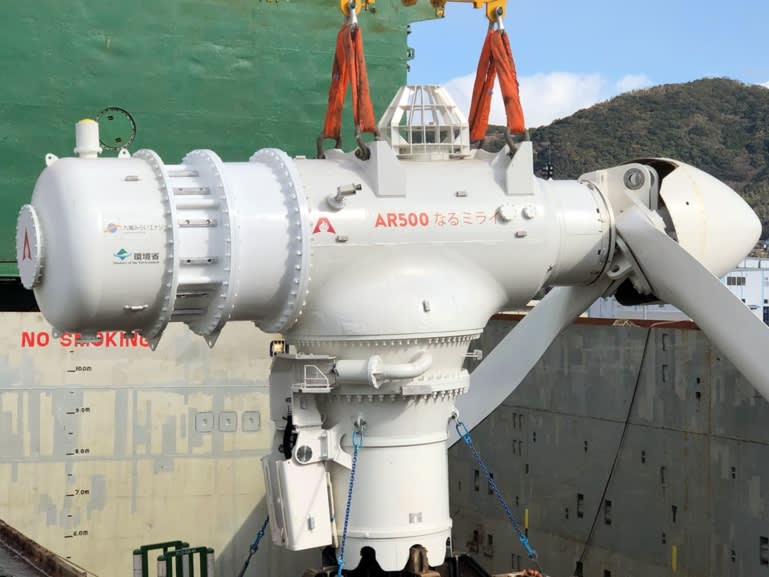 A turbine to generate electricity from tides.

Tides are predictable, unlike wind and sunlight, so they can be "trusted to keep producing stable amounts of electricity without being affected by weather conditions," said Masakatsu Terasaki, an executive at Kyuden Mirai Energy. It is estimated that Japan can generate energy, from tides, equivalent to the amount that 20 nuclear reactors can produce.

As countries strive to achieve zero emissions, global investment in the power sector is projected to grow to $2.2 trillion in 2030, about three times the figure for 2019. U.S. President-elect Joe Biden, who will be sworn in on Jan. 20, pledged to achieve a zero-carbon power sector by 2035.

Across the world, the auto industry is also focusing on developing electric cars, as internal combustion engines look increasingly outdated. Several countries have committed to banning the sale of gasoline vehicles, with the U.K. setting 2030 as its target time frame.

To keep pace with global developments, Japan needs to put to rest the debate about whether renewable energy, which is costlier now, hinders economic growth. Fossil fuels will account for only 20% of the world's primary energy consumption in 2050, down from 85% in 2018, according to a forecast by BP.

As such, Japan should move forward by looking at ways to make renewables cheaper. For one, it can learn from Germany which has managed to increase the share of renewables in its annual power supply by 5 percentage points at an average annual cost of just $2.9 billion.

By contrast, Japan has had to spend 1.8 trillion yen ($17.5 billion) a year for the same market expansion. While Japan's population of around 126 million is much bigger than Germany's 83 million, there should be room still to develop cheaper renewables.

Japan should also take note that energy can determine the destiny of a country. The sharp decline of crude oil prices that started in 1986 was one of the factors that caused the collapse of the Soviet Union. Oil reserves in Western Siberia discovered in the 1960s buttressed the Soviet economy for decades. But the plunge in oil prices depressed the country's oil revenues, leading to a rise in debt to Western countries.

The Middle East has also benefited from its rich oil reserves that have provided an annual income of $600 billion to the countries in the Organization of the Petroleum Exporting Countries. Its control of world supply has also kept the global economy vulnerable to conflicts in the Persian Gulf.

As the beginning of the end of the Age of Oil unfolds, the world energy order will be reshaped. Innovation in energy technology will determine the winners and losers in the new era of green energy.