Deep divisions in US politics have Asia on edge

TOKYO -- The next U.S. presidential election is a year away, on Nov. 3, 2020, and at this point, making a prediction would be foolhardy. With economic uncertainties, an ongoing impeachment inquiry and the race for the Democratic presidential nomination as wild cards, one might as well forecast the weather.

Still, there are two matters that require immediate attention and analysis. One is why Trump retains rock-solid support among Republicans despite waves of allegations and scandals. The other is how divisions in U.S. society, which appear to be deepening, will affect the course of American diplomacy, especially in regard to China.

According to Gallup Polls, Trump's approval rating has remained in the single digits among Democrats but between 80% and 90% among Republicans.

Trump has been mired in a series of scandals since the beginning of his presidency. Recently, the Democrat-controlled House of Representatives launched an impeachment inquiry. Even so, Republican voters remain staunchly behind their leader.

The reason for their support has little to do with Trump's personality. Interviews of white, middle-class Trump supporters in the Midwestern state of Ohio in September bore this out. The supporters said Trump's predecessors had been too tolerant toward illegal immigrants.

They like that Trump is cracking down on illegal immigrants and that he is doing so without fear of criticism. They savor Trump's promises to end what they perceive as excessive support for marginalized citizens. Among the support measures in the crosshairs are welfare payments and a health care system that has come to be known as Obamacare. The Ohioans also cheer Trump for taking China to task over lopsided trade rules and imposing high tariffs. 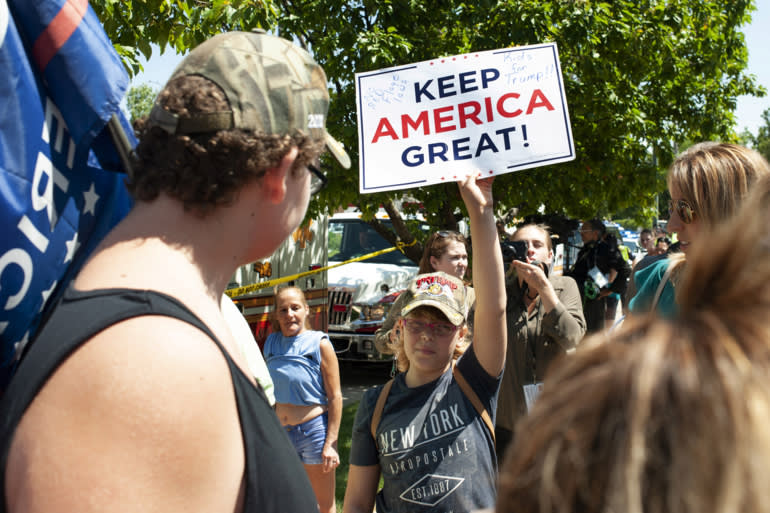 Donald Trump's approval rating has remained in the single digits among Democratic voters but between 80% and 90% among Republicans.   © Reuters

They are angry at a political system they think has put their livelihoods at risk. If illegal immigrants and Chinese products continue to flow into the country, more of their jobs will be lost. If government handouts are expanded, the taxes paid by hardworking people like themselves will be spent on those who "don't work."

This is how Trump supporters think.

In the U.S., there are appalling gaps between executives at big corporations benefiting from globalization and workers who are excluded from this prosperity.

Trump has adopted tough immigration and trade policies to show he is the guardian of the white working-class and the enemy of Washington politicians, bureaucrats and elites. His supporters believe working-class whites are virtually in a class struggle against highly educated establishment types and that Trump is their champion.

So they stay with him no matter what scandal unfolds around him.

Nonwhite, low-income Americans are also frustrated with the country's widening social and wealth gaps. Left-leaning Democratic presidential hopefuls are reaching out to them. Trump and these Democrats seem to be polar opposites but both are growing their support bases by tapping into the same streak of anger.

The worrying factor is how America's social divisions are affecting foreign policy. The Trump administration and Congress are coming to a consensus that China represents a strategic rival, and that tough security and economic policies should be applied.

Sanctions against Huawei Technologies and other Chinese high-tech companies are being tightened. To counter China's Belt and Road Initiative, the U.S. is cooperating with Japan, Australia and India to deepen its economic and security commitments to the Indo-Pacific region.

But how long can the U.S. maintain its physical and political strength in the region when it has deep divisions at home? Even if the government and military want to increase their overseas commitment, working-class voters, many of whom are more concerned with the widening social and wealth gaps in the country, may not support such a policy.

In early October, Trump made an out-of-the-blue decision to withdraw American troops from Syria. Kurdish forces, who had allied themselves with the Americans and against Islamic State militants, were left abandoned. The decision sent shock waves around the world, alarming U.S. allies like Japan and Europe. Major U.S. media outlets have been critical of the move.

Most of the American public, however, has shrugged its shoulders. A CBS News survey shows only 34% of respondents are against the withdrawal, 24% in favor and 41% undecided. A crowd of over 500 people comes out in support of Kurds after the Trump administration decided to withdraw U.S. troops from Syria.   © Reuters

Many working-class and low-income Americans are skeptical when it comes to putting the lives of U.S. troops on the line and spending taxpayer money to quell unrest in other countries. They are more concerned with the precarious state of their own livelihoods. Trump must have sensed this discontent and concluded that withdrawing from Syria would help his reelection bid. Scathing criticism from U.S. allies and the media is a price worth paying, Trump must have determined.

The same calculation likely went into Trump's decisions about skipping global summits where the U.S. has always played major roles, including this weekend's East Asia Summit in Bangkok. Trump also did not attend the previous two such gatherings.

The "America first" approach might not end if Trump loses his reelection bid, at least not if the country's social divisions remain and voters elect another populist.

"Trump has proved that a candidate can win the Republican nomination by appealing to working-class white voters with anti-immigration and anti-free trade policies," said University of Tokyo professor Fumiaki Kubo. "In the 2024 presidential race and beyond, Trump-like Republican candidates could win the White House. The world needs to prepare for such a situation."

Trump is prone to controversial remarks. But what should most concern Asian and European countries is how far and how much America's wide social divisions will hamper Washington's overseas commitments. This is an especially serious matter for Asian allies that depend on the U.S. in dealing with China.