China and the U.S. have been locked in a battle for supremacy for so long that a quick resolution is unlikely. (Source photos by Getty Images)
HIROYUKI AKITA, Nikkei commentatorSeptember 28, 2021 02:54 JST | China
CopyCopied

TOKYO -- Autumn is here. But even as temperatures cool in much of the Northern Hemisphere, a different change is afoot in geopolitics.

Sino-American relations are showing signs of life again after a long deep freeze. Not a full-blown warming, but stepped-up diplomatic maneuvering to gain the upper hand.

In trade, China filed its membership application for the Comprehensive and Progressive Agreement for Trans-Pacific Partnership on Sept. 16 -- hours after Australia, the U.K. and the U.S. announced the so-called AUKUS security framework as part of efforts to deter Beijing.

Less than a week later, Taiwan announced that it had applied to join the CPTPP, putting the 11-member trade deal at the center of the geopolitical tug of war.

The U.S., Japan, Australia and India held the first in-person Quad summit at the White House late last week, bolstering the group's cooperation on vaccine distribution, 5G development, supply chains and space -- all with the aim of countering an increasingly influential China.

A detente between Washington and Beijing seems far off, at least on the surface.

But at the same time, there are signs that President Xi Jinping is not fully committed to a hard-line stance. While demanding that the U.S. switch gears and remove the obstacles that are causing the antagonism, he also seems to want to avoid a further increase in tensions. 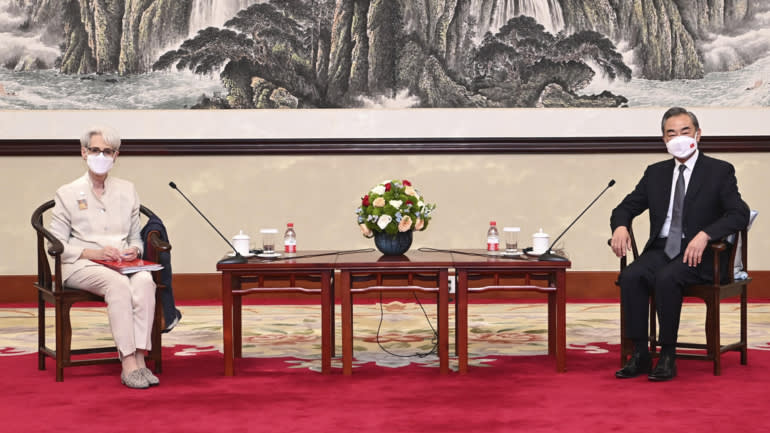 As things stand, U.S.-China cooperation is bogged down on all issues, including climate change and COVID-19. China's message to the U.S. is that to revive cooperation, Washington must not attempt to upset the Communist regime, block the country's development, and infringe on its sovereignty. Beijing is also urging American officials to lift sanctions on party leaders, as well as senior government officials and businesses.

The message was delivered by Chinese Foreign Minister Wang Yi to U.S. Deputy Secretary of State Wendy Sherman when the latter visited China in July. U.S. Special Presidential Envoy for Climate John Kerry met the same stern stance during his visit to China from Aug. 31 till Sept. 3, according to diplomatic sources.

There is no room for U.S. President Joe Biden to comply with China's demands. During the administration of President Barack Obama, in which Biden served as vice president, the U.S. was criticized for taking a weak stance regarding China's maritime expansion in the South China Sea in return for Beijing's cooperation in the fight against climate change.

Partly because of this, Biden has decided to keep pressure on China over human rights and security issues even if Beijing cooperates in combating climate change.

"Beijing thinks the U.S. needs China's cooperation more than China needs cooperation from the United States," said Bonnie Glaser, a China expert at the German Marshall Fund of the U.S. "So, by insisting that there are preconditions for any kind of cooperation, China thinks it can get some concessions from the U.S."

"Particularly, it could be the case for cooperation in the climate realm. But I don't think that the U.S. is going to play this game with China. We're not going to concede anything to the Chinese in order to get their cooperation on global challenges," she added.

On the other hand, under the surface, there are signs that Xi also wants to pause the antagonism. 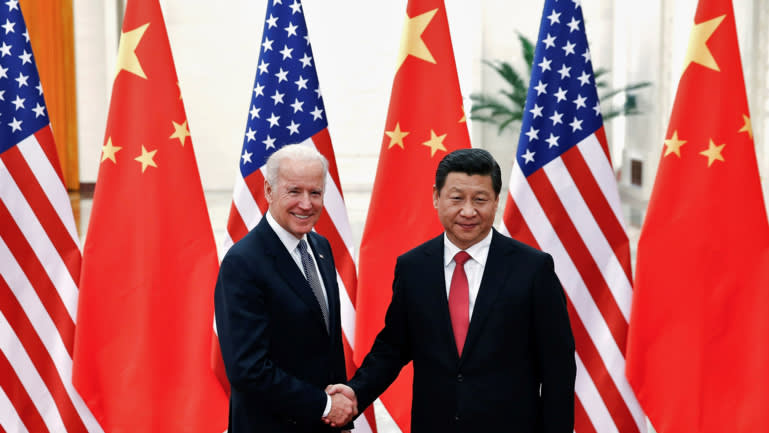 In an intriguing development, Biden and Xi held a 90-minute phone call on Sept. 10, marking the first time the leaders spoke in about seven months.

Biden, who initiated the call, said the U.S. would deepen its involvement in the Indo-Pacific region and insisted the countries should work out a framework to avoid military clashes, according to American and Chinese sources with knowledge of the conversation.

Xi voiced his discontent with the U.S. policy on China but agreed to promote bilateral dialogue. The phone conversation was not as thorny as a previous one in February.

Biden and Xi have known each other for about 10 years since they met when they were both vice presidents. It is said that the two leaders reflected on their previous trips together to regional cities in the U.S. and China in this latest call.

Domestically, Xi cannot afford to continue an all-out confrontation with the U.S. Although he has consolidated power within the CCP by expelling political foes, his political base will fracture if the Chinese economy begins to crumble from tensions with the U.S., adding to growing public discontent over wealth disparities.

Nobody openly criticizes Xi in public in China. But anxieties and questions about unprecedentedly heightened tensions with Washington under Xi's leadership are simmering within the Communist Party.

"Even Mr. Xi in his heart wishes to avoid an all-out confrontation with the U.S.," said Yuji Miyamoto, a former Japanese ambassador to China.

Xi is looking to clear his plate ahead of the CCP's National Congress in October 2022, when he will seek to extend his time in power. He is already dealing with growing friction with China's technology giants and pushing his "common prosperity" drive and is "in no position" to deal with other tough issues and "senior CCP members from top to bottom are aware of such a state of affairs," Miyamoto said. 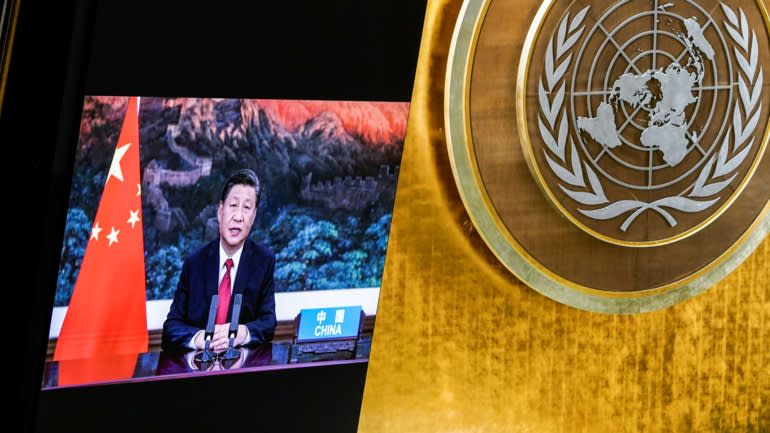 Xi Jinping speaks remotely during the 76th Session of the General Assembly at UN Headquarters in New York on Sept. 21.   © Reuters

The Chinese military is hardly an exception. Though remaining reluctant about a telephone consultation with U.S. Defense Secretary Lloyd Austin, it has opened a channel of dialogue by holding behind-the-scenes talks with a senior Pentagon official in late August.

"Chinese military leaders know that China's chances of winning are low if it now stages an all-out war with the U.S. in, say, the Taiwan Strait. They thus talk tough to check the U.S.," said an expert of Chinese politics familiar with the CCP's internal affairs.

Against the backdrop of such domestic affairs, Xi said in a prerecorded video to the U.N. General Assembly last week that China would not build new coal-fired power plants overseas. The pledge was evidently aimed at attracting a favorable reaction from Washington. Biden, who wants to avoid conflict with China, said in his speech to the assembly that the U.S. is "not seeking a new Cold War."

Three days later, the U.S. government arranged a plea agreement to release Huawei Chief Financial Officer Meng Wanzhou, who had been under house arrest in Canada.

Where, then, are U.S.-China relations headed? The two superpowers have been locked in a battle for supremacy for so long that a quick resolution is unlikely. After all, the rift between the countries is incredibly wide, with China wanting to change the world order and the U.S. eager to keep calling the shots on a global level.

However, it may be possible that tensions gradually ease. To foresee the outlook of bilateral relations, it is necessary to not only examine the tug-of-war between the two countries on the front stage but also look into China's domestic troubles.