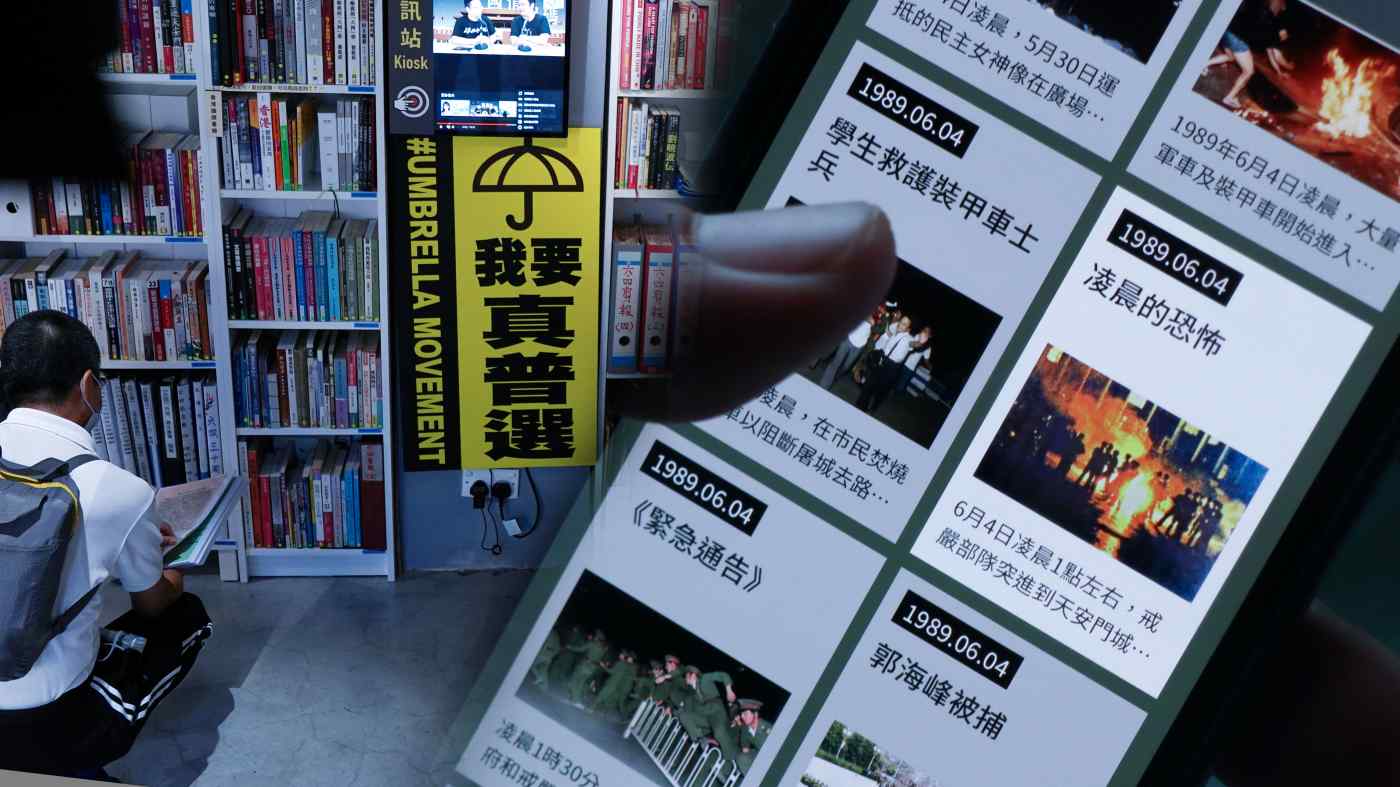 HONG KONG -- Ever since the national security law was imposed by Beijing at the end of June 2020, a number of activists striving for freedom and democracy in Hong Kong have been detained, while many civil organizations instrumental in pushing those causes were virtually forced to dissolve or pushed to the brink of dissolution.

The Hong Kong Alliance in Support of Patriotic Democratic Movements of China is one of them. The Alliance had been organizing the city's annual candlelight vigil of the 1989 Tiananmen Square crackdown but lately has been heavily targeted by Beijing and pro-Beijing authorities in Hong Kong.

Overall circumstances seem to be deteriorating at home, but a rare glimpse of hope for the Alliance has emerged in cyberspace.

In early August, the June 4th Museum of Memory and Human Rights opened online, two months after Hong Kong government inspectors forced the closure of the physical museum, dedicated to preserving the memory of the 1989 Tiananmen crackdown.

"The Communist Party regime is using digital technology to build a high wall of surveillance, but the technology also provides more opportunities and channels for opposition forces like us, too," Chang Ping, a prominent Chinese journalist living in exile in Germany for the past decade, told Nikkei Asia in an online interview on Saturday. Chang Ping, a Chinese journalist now living in exile in Germany, is in charge of the online June 4th Museum. (Photo courtesy of Chang Ping)

Chang -- who participated in the 1989 pro-democracy movement as a student at Sichuan University, in the inland Chinese city of Chengdu, and was subsequently detained -- has been named as the chief curator of the digital museum.

"Digitalization is already part of life," he said. "There are no limits to the capacity, and we are going to fully maximize that. It will give us a bigger possibility." With the real museum having to close and the Alliance's real-world breathing space rapidly shrinking, Chang intends to create a new platform for people around the world to be aware of the tragedy three decades ago and enhance an alliance among like-minded people.

The online museum consists of six halls with separate themes. The "Time" hall collects documents and photos to present a chronology of political repression and other events since the Chinese Communist Party took power in 1949, with a detailed account of the 1989 pro-democracy movement that ended in a bloody military crackdown on June 4.

Another hall records the human cost of the crackdown and other actions by the communist regime. The death toll from the 1989 Tiananmen incident remains unclear, with estimates varying from 200 to at least 10,000. The museum gives the names and personal information of 178 victims, some with portraits.

A digital June 4th Museum separate from Hong Kong's real one has been pondered and planned by the Alliance for years. Chang said the national security law has accelerated the process.

"We have to preserve it because we have an uncertain future," Lee Cheuk-yan, chairman of the Alliance, told reporters at the now-closed museum on June 6, 2020. Stressing the urgent need to protect the evidence of the crackdown 32 years ago, he sought online crowdfunding donations. "We don't know what will happen to this museum after the national security law is promulgated," he said weeks before it was. "This is also risk control, so what we have now could be preserved."

While the Alliance was successful in collecting 1.68 million Hong Kong dollars ($216,400) from 1,186 individual donors, sufficiently meeting its target in a little over two months, Lee's ominous premonitions turned out to be true; the museum is now inaccessible. 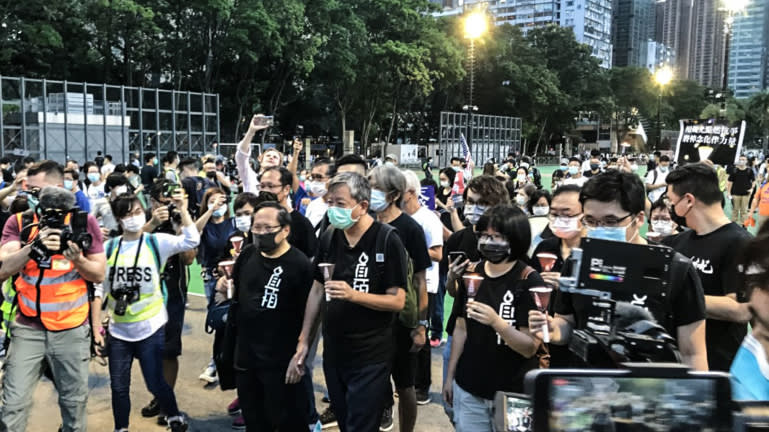 Chairman Lee Cheuk-Yan, left of center and wearing a blue mask, and Vice Chairman Albert Ho Chun-yan, left of Lee in the photo, lead a candlelight vigil at Victoria Park on June 4, 2020, defying a police ban that cited the pandemic. (Photo by Kenji Kawase)

On top of that, Lee himself is now serving a 20-month prison term for participating in a rally on Oct. 1, 2019, when the Chinese Communist Party celebrated 70 years in power. This was deemed to be a retroactive "unauthorized assembly" under the since-imposed national security law.

Similarly, Alliance Vice Chairman Albert Ho Chun-yan, like Lee a longtime activist, is serving an 18-month sentence on the same charge. Ho on Wednesday was slapped with another 16 months for his role in a separate "unauthorized assembly" two years ago, along with six other activists.

The headwinds against the Alliance grew fiercer when Luo Huining, Beijing's top representative in the territory, implicitly named the pro-democracy group as a "genuine archenemy" of Hong Kong governance. Speaking at an event celebrating the party's centennial in June, Luo condemned the Alliance as an organization advocating "the end of one-party dictatorship," which has been the Alliance's key slogan since its inception in May 1989.

As new pressures mounted, the group decided to fire all staff by the end of July, downsize the top governing body to seven members from the original 20 and greatly minimize day-to-day activities.

Hong Kong police recently launched an investigation against the Alliance for suspected collusion with foreign forces, one of four crimes under the national security law punishable by up to life imprisonment. The Alliance leadership is required to officially reply to the allegations by Tuesday.

Under the circumstances, the Alliance resolved to cut itself off from the online museum and designated the independent team led by Chang to take full charge. This was done to keep the digital space free from any kind of undue influence or repression.

Members other than Chang and the whereabouts of the server have not been disclosed. As the long arm of Beijing extends beyond China's borders, "this is coming from security concerns," Chang said. He also said that the technicians who support the daily operations are "mostly young people" in different parts of the world who have been involved for over a year.

Despite a political climate that allows little optimism to shine down, Chang remains hopeful.

He fully understands the harsh reality in which the "Chinese communist regime is way ahead of the opposition forces in terms of using digital and online technology, as their comprehensive national strength and economic might allow them to attract cooperation from Western tech companies," he said without naming any.

He vows to keep improving the online museum to attract more attention. When next June 4 rolls around, the museum should have two new versions -- an English translation and one with simplified Chinese characters catered to mainland visitors -- as well as new exhibits. When the need for more money arises, Chang will seek another round of online crowdfunding in an open fashion.

"We are now able to do so many things online, and what happens online act upon changes in real life," Chang said. With his anonymous partners and co-workers, he is willing to take on the legacy of Hong Kong's lost freedoms and keep up his pursuit for democracy in China. 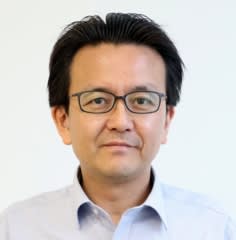 Kenji Kawase is chief business news correspondent for Nikkei Asia and an editor of #techAsia, a newsletter on technology in Asia that combines the best reporting from Nikkei and the Financial Times. He has been reporting and editing for Nikkei since 1992, mainly covering corporate and financial news in Tokyo, Osaka, Shanghai, Hong Kong and Bangkok. He returned to Hong Kong for the third time last year.