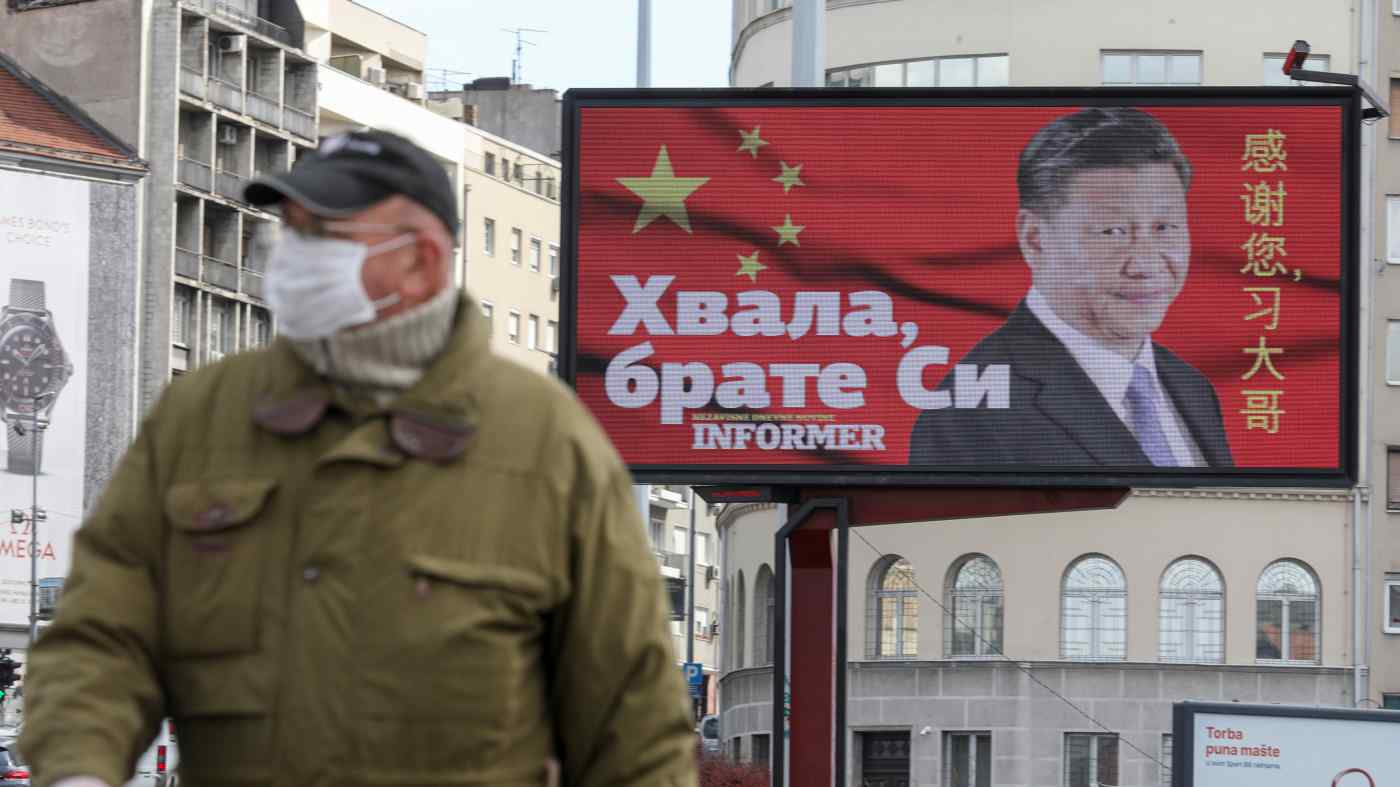 TOKYO -- China, controlled by its all-powerful Chinese Communist Party, was not perceived particularly favorably, but was nevertheless a promising business partner, diplomats and intellectuals told me when I visited the Czech Republic and Hungary two years ago.

Enthusiasm for China was strong in Eastern Europe at the time, amid a period of rapid economic construction. But expectations among these nations of the support that China could offer are starting to turn into disappointment.

Amid the escalating confrontation between the U.S. and China, countries such as Japan, Australia, European nations and other allies of the U.S., are discussing the major item on their agenda of how to cooperate over policy towards China. The detachment of Eastern European countries from China indicates the limitation of Beijing's economic influence and provides a useful clue about how the U.S., Japan and Europe can compete against China for geopolitical clout.

Sentiment about China has clearly already dampened in Western European nations, such as Germany, France and Britain, due to such issues as disputed island-building in the South China Sea, cyber espionage, the infringement of Hong Kong's autonomy and the suppression of Uyghur people in China's Xinjiang province. China apparently being the source of the spread of COVID-19 infections has not helped.

There was reportedly an extremely strained atmosphere at a summit meeting between the European Union and China via video conference on Sept. 14 as German Chancellor Angela Merkel and other EU leaders criticized China for human rights violations, provoking a strong reaction from Chinese President Xi Jinping, who said China did not need a "teacher" on human rights. Disappointment about China is spreading in Eastern Europe, an area that has previously had a conciliatory attitude toward Beijing. The honeymoon period of good relations between the two, which had been maintained through economic ties, appears to be ending. The bipolar division of the world between the U.S., Japan and Europe on one side and China on the other is only likely to increase.

Enthusiasm for China was on the rise in Eastern Europe eight years ago as 16 countries in the region formed an economic cooperation forum with China called "16 plus 1." Since 2012, leaders of the forum have met almost every year.

The 16 countries include 11 European Union members, such as Hungary and the Czech Republic. The forum became "17 plus 1" in 2019 when Greece joined up.

The development triggered a sense of crisis in Germany and France, with one German official warning that China would corral Eastern Europe and split the EU. In 2016, when the EU prepared a statement criticizing China for its territorial claims over the South China Sea, the unity of the bloc was shaken when Hungary and other countries opposed it, out of their consideration for China.

But detachment from China is now spreading in Eastern Europe, spearheaded by the Czech Republic. China was greatly angered when Milos Vystrcil, president of the Czech Senate, visited Taiwan for several days from the end of August. In January, Prague, the Czech capital, formalized its "sister city" relationship with Taiwan's capital Taipei, after severing the same relationship with Beijing. Czech Senate President Milos Vystrcil is presented with a medal by Taiwanese President Tsai Ing-wen during a meeting in Taipei, Taiwan on Sept. 3.   © AP

Furthermore, from last year onwards, Poland, the Czech Republic, Romania and Estonia agreed to cooperate with the U.S. on 5G cybersecurity protection, suggesting that they would follow Washington's example in imposing restrictions on top Chinese telecommunications equipment maker Huawei Technologies. In addition, Romania canceled a nuclear power plant deal with a Chinese company in June.

These and other developments are traceable, first of all, to disappointment among Eastern European nations about economic cooperation with China, according to local diplomatic experts.

China had proposed grand infrastructure building plans for the region as part of its Belt and Road Initiative, but they have not advanced as expected.

"Since 2012, China launched many investment projects in [Central and Eastern European countries], mainly in the energy sector and transportation infrastructure, however, except for the Balkans, most of them have not yet materialized in full," said Rudolf Furst, a senior researcher at the Institute of International Relations Prague. "Therefore, expectations on economic cooperation with China have been diminishing on the Central and Eastern European side."

Less than one-tenth of China's direct investment in the EU from 2000 to 2019 went to Eastern Europe. Even Czech President Milos Zeman, a self-acknowledged pro-China leader, voiced his disappointment about Beijing in January.

Secondly, Eastern European countries have been growing more concerned about the potential for Beijing to intervene in domestic affairs and national security as ties deepen. An executive at Huawei's branch in Warsaw was arrested on suspicion of spying for China in January 2019.

Noting that China is rapidly expanding its espionage network in the Czech Republic, the Czech intelligence agency said in November last year that China had become a threat, comparable with Russia, to the country. Chinese President Xi Jinping speaks in a pre-recorded message which was played during the 75th session of the United Nations General Assembly on Sept. 22 at U.N. headquarters in New York.   © AP

A leading Chinese company is suspected to have provided questionable funds to top Czech government officials, according to an indignant member of the national parliament.

In Eastern European countries which used to be incorporated into the communist bloc dominated by the Soviet Union, the door to democracy opened from 1989 onwards. But, although they might be attracted by China's economic power, they do not side with its communist regime.

The situation is the same even in Hungary, where Prime Minister Viktor Orban has been reinforcing his autocratic position. China's dictatorial model is hardly acceptable to Hungary, which at least still holds elections, said one Hungarian political expert, adding that it was meaningless for the country to form close ties with China without advances in economic cooperation.

Britain, Germany and France became disillusioned about China earlier than Eastern European countries, not only because of human rights and national security problems but also because restrictions imposed on foreign companies by Beijing have toughened the environment for doing business with China.

A survey conducted in February by the European Union Chamber of Commerce in China found that the business environment had become tougher for 49% of EU companies operating in the country from a year earlier.

Since the outbreak of the novel coronavirus, China has been promoting so-called "mask diplomacy" for Spain and Italy, which have been hit by widespread infections, as part of a desperate attempt to keep European nations sweet. By shipping medical supplies such as protective masks to Europe, China has sought to improve its image on the global stage as a responsible leader. But public opinion in Europe has yet to improve in its favor.

"European perceptions of China have been worsening as a result of a number of issues, and COVID-19 is only accelerating this trend. I don't predict that [relations between] Europe and China will go back to how they were in the near future," said Valerie Niquet, senior fellow at France's Foundation for Strategic Research.

Germany and other European countries, which rely heavily on the Chinese market, appear unlikely to take as tough a stance on China as the U.S. has. But if America, Europe and Japan develop more aligned China policies, the room for trilateral cooperation on dealing with Beijing will expand in the fields of diplomacy, security and economy. Although relations between the U.S. and Europe have been extremely strained under the administration of U.S. President Donald Trump, they need to at least rebuild cooperation on their policy toward China.