Economists give shot in the arm to Japan's COVID-19 fight To understand this simile, one must look to the 1990s when Japan's asset-inflated bubble economy burst. Nonperforming loans at banks were a menace, eroding the economy. With the weight of bad loans, the economy failed to achieve a full-scale recovery despite stimulus measures such as fiscal spending and monetary relaxation.

The injection of taxpayers' money into the banking system was needed to root out the mess, which other countries, such as the U.S., had already done. But as the government was reluctant to take the step, fearing a public backlash, the problem took nearly 15 years to resolve.

The post-bubble situation may be applicable to Japan's COVID-19 crisis if "bad loans" are replaced with "novel coronavirus" and "taxpayers' money" with "vaccines."

In his book, "Trap of the Japanese Economy," which he wrote when he was with the Ministry of Economy, Trade and Industry, Kobayashi points out the bad loan problem had been behind Japan's prolonged economic stagnation. The warning subsequently exerted a great deal of influence on the government's policy measures. Top executives at Yamaichi Securities, one of a major securities firm in Japan that went bankrupt after the bubble economy collapsed, apologize at a press conference in August 1997.   © Kyodo

From the early stages of the COVID-19 pandemic, Kobayashi called for expanded testing and strengthening the health care system. But he feels that the proposed measures have progressed slowly because infectious disease specialists and health ministry officials held sway in government meetings, which is different from typical government panels.

Measures to revamp the health care system, such as correcting the uneven distribution of medical resources, have hardly made headway. Vaccinations started in Japan much later than in the U.S. and Europe because the health ministry was very cautious and methodical in approving COVID vaccines after multiple prior vaccines, dating back decades, had caused terrible side effects and resulted in suits against the government.

The delay in inoculations appears to have already affected the economy. The Organization for Economic Development and Cooperation raised 2021 economic growth projections for the U.S., Europe and China in its latest forecast last month, but it revised its projection for Japan downward, citing the vaccination delay among other reasons.

Economists have begun taking action on the view that they can no longer stand on the sidelines and watch the policy mess unfold. A group of economists, including professor Fuhito Kojima at the University of Tokyo, said last month that they would advise the Chiyoda Ward government in Tokyo about how to promote vaccinations. 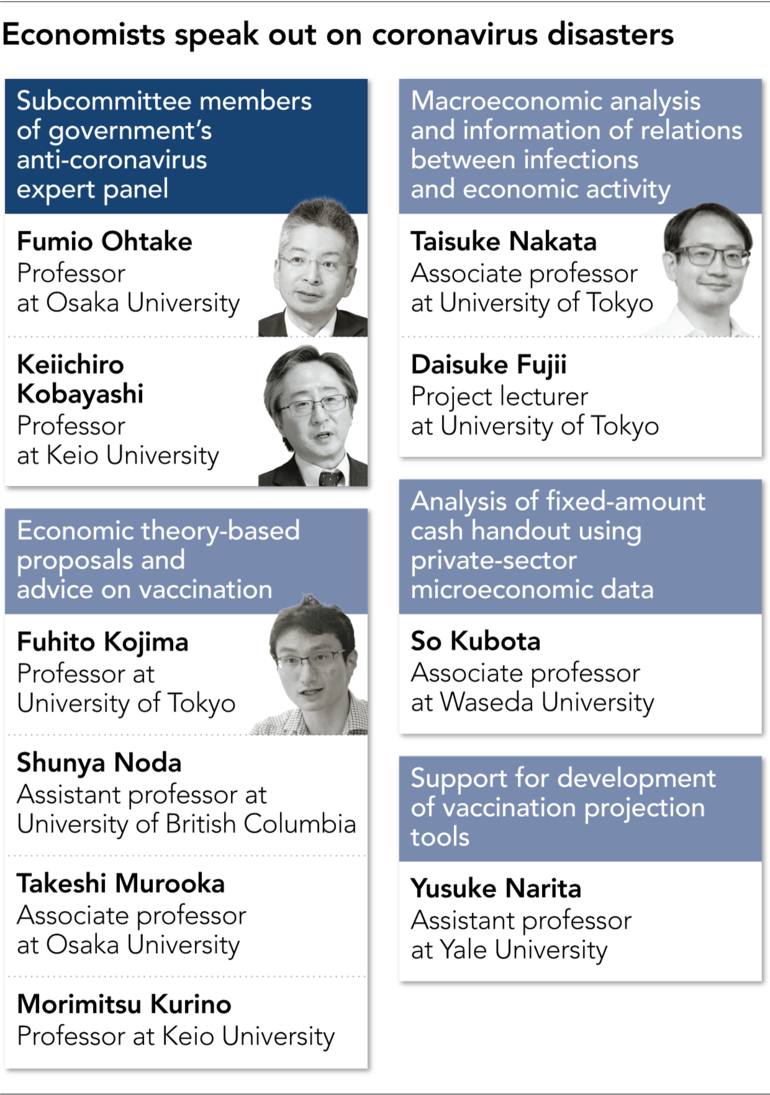 Kojima is a leading scholar in an advanced economic field called market design, in which legal systems are designed based on game and other theories. He was invited to the University of Tokyo from Stanford University in the U.S. last fall.

Kojima and the other economists have begun the challenge of applying the latest knowledge of market design and behavioral economics to society.

Another group of economists, led by Taisuke Nakata, associate professor at the University of Tokyo, began to announce analytical findings of relations between COVID-19 and the economy. They analyze effects of an increase or decrease in infected people on economic activity and release findings online on a regular basis.

The group recently drew attention after it estimated what effect holding the Tokyo Olympics would have on infections. Members were invited by Prime Minister Yoshihide Suga last month to explain how vaccinations would affect the spread of infections and economic activity.

Nakata returned to Japan last year after serving eight years as an economist at the U.S. Federal Reserve Board. He began to be involved in the COVID problem when he recognized a lack of ways to promote anti-infection and economic measures at the same time, concluding that economists should provide estimated figures that can be used in deliberations.

Utilizing his expertise, Nakata also proposed that the government should use a forward guidance technique, which shows the future of financial policy, in offering information on anti-COVID measures.

Yusuke Narita, assistant professor at the American Ivy League institution Yale University, is helping develop tools to provide information on vaccinations based on his data analysis expertise, while conducting classes for students at Yale online as he is unable to leave Japan amid the pandemic.

Calling home a country's intellectual diaspora is not new. China has adopted a "sea turtle" policy of bringing back Chinese professionals who have accumulated experience at leading universities and businesses in the U.S., and appointing them to important positions. In Japan, "sea turtle" economists are also starting to play important roles.

In 1998, following the collapse of the Long-Term Credit Bank of Japan, lawmakers from the ruling and opposition camps emerged in policymaking; they came to be known as the Shinjinrui, or new breed of humans.

The young scholars willing to use their expertise to battle COVID could also be called Shinjinrui. Fumio Ohtake, professor at Osaka University and also a member of the COVID subcommittee Kobayashi sits on, has formed a working group in the Japanese Economic Association to support the use of economic principles in forming COVID countermeasures, recognizing that economists, unlike scholars of infectious diseases who have research teams to assist their analytical work, lacked strong support systems.

"Economists are freelance professionals and did not follow what others were doing with regard to the coronavirus problem," he said.

Based on an economic theory, Kojima concluded that vaccine reservations should not be on a first-come, first-served basis to avoid confusion. "We thought we had begun issuing the warning from an early stage, but it failed to get through widely," he said, regretfully.

Saying that the delay in the start of vaccination caused by formalism, authoritarianism and sectionalism was "extremely regretful," Nonaka stressed that "collective intelligence" is necessary to promptly figure out how best to cope with problems and take action in the event of crisis.

"It is necessary to form an industry-government-academia scrum beyond organizational frameworks as occasion demands," he added.

The crisis has yet to be put under control. It is time to gather Japanese intellectual capital to end the repetition of failures.