Will President Rodrigo Duterte stay on in power as vice president? Since 1987, Philippine presidential terms have been capped at one lasting six years to prevent a repetition of the protracted dictatorship of President Ferdinand Marcos. (Source photos by AP and Getty Images)
TORU TAKAHASHI, Editor-in-Chief, Editorial Headquarters for AsiaJuly 6, 2021 15:53 JST | Philippines
CopyCopied

On June 24, former President Benigno "Noynoy" Aquino passed away at the young age of 61 from kidney disease.

Four days later, President Rodrigo Duterte -- a man 15 years older than his predecessor -- said running for vice president in May was "not at all a bad idea."

Philippine presidents are limited to a six-year term and are barred from reelection. Duterte defeated Aquino's chosen successor in the last presidential election in 2016. He cannot run for president next year, but a scheme to remain in power as vice president has gathered momentum.

The contrast between the sickly Aquino and the vigorous 76-year-old Duterte is not new. The pair also had quite different origins.

Aquino was born into a wealthy family of sugar cane plantation owners in Manila. His father -- also Benigno -- was a senator who was assassinated in 1983 by the Marcos regime upon his return from exile in the U.S. His mother, Corazon, overthrew the Marcos regime in the 1986 People Power Revolution and became president.

Duterte, the ultimate outsider, grew up in Davao in the southern island of Mindanao. His father, Vicente, was a lawyer. Young Duterte followed in his footsteps and became a public prosecutor. He went on to become mayor of Davao, and was in office for over 20 years before taking his barnstorming run at the presidency.

Much of the old Manila-based politics clashed with the policies advocated by this provincial upstart with his immense bravado and populist appeal.

While Aquino wanted to uphold the rule of law and had a strong anti-corruption agenda, Duterte's main election plank was a ferocious war on drugs that has involved violent police operations and ridden roughshod over human rights. Conservatively, there have been over 27,000 deaths, according to human rights groups. Many were blatant extrajudicial killings.

Duterte is never afraid to threaten strongarm tactics to get what he wants. He recently caused a stir by warning people reluctant to get vaccinated against COVID-19 that they could end up in jail.

On the diplomatic front, Aquino paved the way for the return of U.S. troops with a new military agreement. He also took the territorial dispute with China over the South China Sea to international arbitration at The Hague in the Netherlands, where the court ruled in his favor.

Duterte, on the other hand, has repeatedly announced and then postponed his decision to scrap the Visiting Forces Agreement, which defines the legal status of U.S. soldiers stationed in the Philippines. The agreement remains in limbo. He called the international ruling on the South China Sea a "waste of paper," and has approached Beijing for economic assistance. 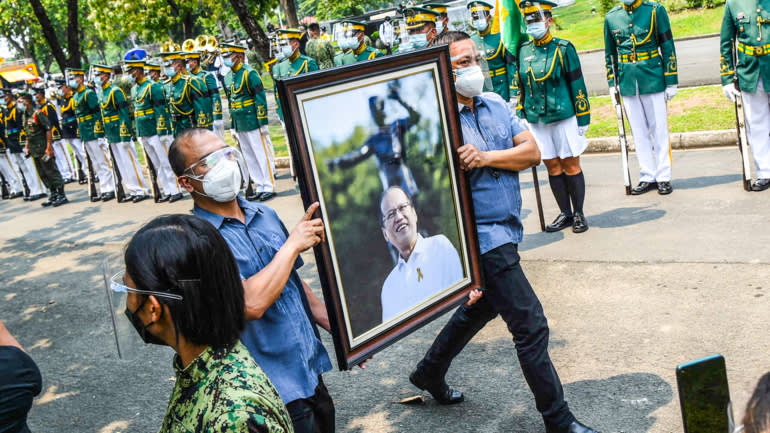 Philippine military personnel with a portrait of the late President Benigno Aquino during the interment of his remains at a memorial park in Manila on June 26.   © AFP/Jiji

The two men were polar opposites in so many respects, but there were some areas in which there was productive interaction.

One was economic policy. Aquino promoted fiscal restructuring, and in 2013 major investment rating agencies gave the country's debt an "investment grade" rating. With this and Aquino's anti-corruption program as a foundation, Duterte launched an infrastructure development plan called "Build, Build, Build," which he has implemented rapidly.

The program includes the construction of the country's first underground railway after more than 40 years of planning. The stagnation that once earned the Philippines the nickname "the sick man of Asia" has gone. Excluding 2020, when the COVID-19 pandemic struck, economic growth has been high during both presidencies -- generally over 6%.

The other main area of overlap has been the peace negotiations in Mindanao. In a country where more than 90% of the population is Christian, Islamic forces demanding separation and independence have been fighting the government for more than 40 years, resulting in more than 100,000 deaths.

In 2014, Aquino signed a historic peace agreement that permitted the creation of an autonomous government, and in 2018 Duterte signed and implemented the Bangsamoro Basic Law, which contained more detailed regulations. The autonomous government is expected to be set up next year.

Looking closely at the fate of the two men, one can see the shadow of former President Ferdinand Marcos. He was in power for 21 years between 1965 and 1986. Previously, Philippine presidents followed the U.S. rule of only two terms, each lasting four years.

In 1972, toward the end of his second term, Marcos declared martial law and suspended the constitution, which set the stage for his dictatorship. The current constitution, enacted in 1987 on Corazon Aquino's reformist watch, allows for only one presidential term of six years.

Six years can pass very quickly if the president is competent, but can drag on if they are inept. Aquino left office with both his infrastructure development plan and the Mindanao peace negotiations unfinished. He simply ran out of time, but the programs Duterte inherited are still going strong.

Duterte's constant zigzagging on relations with the U.S. and China has destabilized regional security. The Philippines is one of only five U.S. allies in the Indo-Pacific region -- the others being Japan, South Korea, Australia and Thailand.

Aquino's unpretentious personality endeared him to many, and he retained a relatively high approval rating -- but not as high as Duterte as he approaches his term's end.

So why did voters choose Duterte as their next leader instead of Aquino's favored successor? In some respects, populism alone cannot explain public sympathy for the idea of "overthrowing the political and economic domination of Manila's elite."

Rather, it is the appeal of a strong leader, symbolized in a poll conducted by Asian Barometer in 2014, two years before the Duterte administration took office. When asked if "strong leaders should decide things without parliament or elections," half of those in the upper strata supported the idea. In middle and lower social categories, the figure was below 40%.

"There are doubts about whether democratization has really improved the country," Takeshi Kawanaka, chief senior researcher at the Institute of Developing Economies at the Japan External Trade Organization told Nikkei Asia.

"Memories of the human rights abuses during the Marcos era have faded," he said. "There is a tendency to reconsider and think that the discipline and order of that time were not so bad." He argues that while the Philippines was often hailed as a pioneer of democratization in Asia, there has been exasperation because it looked like a "loser" in the process. That discontent supported Duterte's rise and has kept support for him strong. Sara Duterte, the eldest daughter of President Rodrigo Duterte, leads the polls to be his successor next year. The question increasingly being asked is whether Duterte will remain in the political frame as vice president. (File photo by Reuters)

With the next presidential election due in 10 months, Sara Duterte, the president's eldest daughter and the mayor of Davao, is leading in the polls. She has denied that she is running, and Duterte claimed he told her not to run, but few believe them.

That she is mayor of a rural area and is traveling around the country despite the pandemic seems to signal preparation for the presidential election, said Victor Manhit, CEO of Stratbase, a Philippine think tank. If there is not enough support for Sara, the father and daughter could team up to run for vice president and president as the last option, he added.

Duterte's eldest son, Paolo, is a congressman and his second son, Sebastian, is the vice mayor of Davao. The political influence of the Duterte clan is growing steadily. It has usurped the Aquinos, the greatest patrons of Philippine democratization. It seems as if the specter of the "Marcos dynasty," which ruled for a long time, is once again rearing its head.

A slightly similar situation exists in Indonesia. Presidents there are limited to two five-year terms to prevent repetitions of the 21-year rule of Sukarno and the 32 years of Suharto. Recently, however, a movement has surfaced that supports a third term for President Joko Widodo.

In both countries, the election of the president by direct popular vote has been contentious for some time, but elections carry uncertainty and there is no guarantee of popular support for a president prepared to bend the spirit of the constitution to retain power.

Yet both countries are seeing open discussions about the prolongation of power -- long a taboo. It is unclear whether this is evidence that democracy is maturing -- or in retreat.